What are some examples of positive prejudice

Prejudices: how they arise - tips on how to overcome them

Blondes are stupid, Poles steal, Swabians are stingy: Everyone has prejudices. We like to speak out of it - but we still pigeonhole people from which it is difficult to get out. Dangerous! Because such prejudices and clichés have an enormous influence on how we think and act. The result has little to nothing to do with reality. We'll show you how prejudices arise - and more importantly - how you can easily overcome them ... 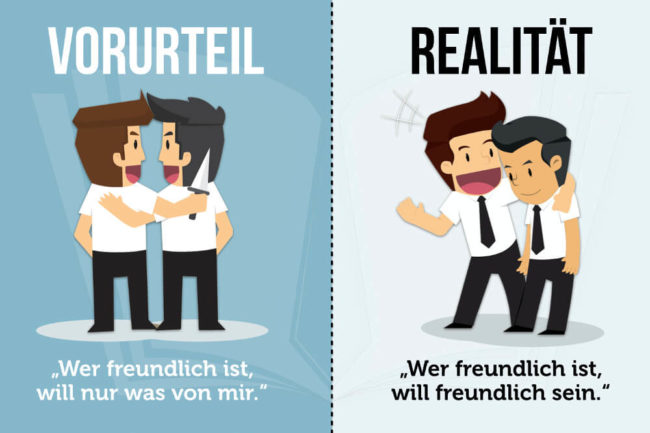 What is a prejudice?

A prejudice is a preconceived notion about a person, group or specific situation without any direct experience. Instead, it is often generalized on the basis of hearsay.

In order to effectively process information that we encounter in social life, we have to simplify. So people are put into groups and we call up what we know about those groups. Prejudices make thinking easier.

People keep categorizing everything, all day. In relation to people, gender, age and skin color are perceived first. There is no time at all to subject every person we meet to a careful analysis, so the brain switches to a kind of autopilot.

At the beginning of every categorization there is the stereotype. A certain characteristic of people is declared typical and everyone who contains that characteristic is put into a group.

The terms stereotype and prejudice are often used synonymously, although there are subtle differences:

Difference Between Prejudice and Stereotype

A stereotype is a more unconscious categorization that can be both neutral and positive. Prejudices fall back on such a categorization and (usually) evaluate them negatively.

A stereotype would be to say that French people always walk around wearing berets. When you call all French people “frog eaters” you are talking about prejudice. This assumption violates three norms named by the Federal Agency for Civic Education:

Some people have their own personal prejudices, others are widespread and shared by many people. The strengths and forms of these prejudices vary, but it is common prejudices that you may find yourself dealing with:

➠ Blondes are stupid.
➠ Women do not drive well.
➠ Men are not emotional.
➠ Women are not very resilient.
➠ Men watch football and drink beer.
➠ Foreigners are particularly criminal.
➠ Germans have no sense of humor.

A closer analysis shows that these prejudices cannot be held, but they shape our thinking. Although prejudices are usually defined negatively, there are also positive prejudices or those that get by without a value judgment.

Causes: where do prejudices come from?

Before you indignantly contradict and argue that you are not prejudiced, it is best to take another moment and be completely honest with yourself. Maybe it's a name, Kevin or Chantal for example, that you automatically associate with a lower level of education.

So the real question is: How do prejudices arise and what is their purpose? There are several theories that explain how prejudice emerges. It is above all to the merit of psychology, social psychology and sociology that their studies shed light on the darkness.

Prejudices are already shaped in early childhood, and even kindergarten children recognize differences. The division into groups is important for children to develop their own identity - and gender is often the first characteristic that is noticed. It can be seen that the social ingroup is judged better than the outgroup. From the point of view of little boys, little girls are stupid at first and are not allowed to play along.

Scientists suspect that this was due to evolutionary reasons that ensured the survival of the group. In earlier times it was an important protective mechanism that could ensure one's own survival once a threat was seen in strangers and different people.

Psychological experiments in which people were shown different ethnicities showed that the amygdala is particularly active in images of foreign ethnicities. So the area of ​​the brain that is responsible for fear and flight.

It is different with photos with the same ethnicity. Prejudices and the (at least unconscious) belief that strangers are bad and evil have therefore become deeply anchored in human beings. Regardless of this, parents, but also the social fabric and society, have a major influence on the prejudices that prevail.

Another theory is that prejudices can arise emotionally - more precisely, through personal frustration, the cause of which is unknown or which simply cannot be changed. If one's own job is lost, a prejudice is used as a scapegoat against all foreigners who have made the job controversial.

The frustration fuels the emergence of the prejudice, regardless of whether it has anything to do with reality.

Prejudices also arise from people's desire to make the world as understandable as possible. It is impossible to evaluate the innumerable impressions and perceptions individually - for the sake of simplicity these are grouped into categories.

This makes it easier to recognize relationships and simplifies the complexity to a level that can be cognitively processed.

Once prejudices have established themselves, they are difficult to overcome. There is another circumstance here that favors adherence to the ready-made opinion. Prejudices act like a filter. You pay more attention to information that fits your own scheme.

Nobody likes to admit prejudice - most answer the question socially desirable. Researchers noticed that the human brain tends to collect negative information. Anyone who has the prejudice that a certain group of people is criminal per se and a corresponding report appears in the news only sees their opinion confirmed.

In order to combat prejudice, contact with the respective group of those who are discriminated against is generally recommended. The “subtyping” phenomenon shows how stubborn they seem.

The subtyping leads to a relativization. If you get to know each other better, individual people are taken out of the prefabricated drawer for this group, according to the motto: Exceptions confirm the rule. Basically, however, the reservations about this group are retained. For example, anyone who has a friend or colleague to whom their own prejudice does not apply declares them an exception, but does not question the prejudice against the rest of the group.

In addition, positive statements about a group are generally given less attention.

The most common consequences of prejudice are arguments and misunderstandings. Anyone who is repeatedly confronted with prejudices and never gets the chance to show himself for who he really is reacts with frustration and defensiveness. It is exhausting to fight against prejudice.

Another danger with prejudices: You do not form your own opinion. Your thinking and therefore your actions are only controlled by what you think you know. You don't have any personal experiences, instead you just fall into the justifications and arguments that others have talked you into. This makes you manipulable to a high degree, since you take over without reflection what prejudices other people put in front of you.

Prejudices can have serious consequences, especially socially. Exaggerated, they lead to racism, xenophobia and exclusion. Negative prejudices lead to a growing rejection of certain groups.

Ultimately, prejudices even change the behavior of the people against whom they are directed. Through our constant prejudices we force people to become what we want to see in them. This is also known as the Procrustal bed - a shape that something is forced into when it actually doesn't fit. Behind it is the story of the mugger and sadist Procrustes.

He forced strangers into his house and put them in a bed that was either way too big or way too small. If the bed was too big, he would stretch his victims until they died. If it was too small, he chopped off their legs.

Not exactly nice and not a pleasant idea, but a fitting metaphor for prejudice and how we use it to force other people into it.

Prejudices cannot be brushed aside. You cannot decide overnight that you no longer have prejudices and from now on you can walk through the world with an open mind and completely impartial. That may be a good intention, but it just doesn't work that way. The ways of thinking are too deeply anchored for that and have become a habit over many years. But you are not at the mercy of your prejudices. The prerequisite for being able to overcome prejudices is, of course, first of all the will to seriously want to break them down.

The best and most effective way to overcome prejudices is the so-called Mere-Exposure-Effect, the regular contact with exactly those people or groups against whom you have always been prejudiced. Prejudices often consist of missing or incorrect information. You counteract this by forming your own picture and collecting your own personal information. You will find that previous prejudices simply cannot be confirmed - and you begin to question your ways of thinking and to change it bit by bit.

We have also put together a few tips for you that can help you overcome your prejudices:

Sounds easy, but often turns out to be difficult. A first step in breaking down prejudices is to recognize that they are there. Take a critical look at your own opinions. Ask yourself: At what point do I resort to prejudice? Which people do I hardly give a chance? Just being aware of one's own prejudices can help to deal with them and to break down preconceived ideas.

Be aware of other people's prejudices

An uncomfortable finding: other people are certainly prejudiced against you. No matter which group you belong to. There is always a drawer to be pigeonholed in and from which it is difficult to free yourself. Understanding how frustrating and unfair this is makes it easier to break down your prejudices.