To which independent country does Patmos belong

Patmos (Greek: Πάτμος, pronounced [ˈPatmos]) is a small Greek island in the Aegean Sea. It is perhaps best known today as the place where the disciple / apostle John received the visions found in the book of Revelation of the New Testament and where the book was written.

It is one of the northernmost islands of the Dodecanese complex and has 2,998 inhabitants and an area of ​​34.05 km 2 . The highest point is Profitis Ilias, 269 meters above sea level. The Patmos parish , to which the barrier islands Arkoi (44 inhabitants), Marathos (5 inhabitants) and several uninhabited islands belong, has a total population of 3,047 inhabitants (2011 census) and a total area of ​​45,039 square kilometers (17,390 sq mi). It is part of the Kalymnos regional unit. 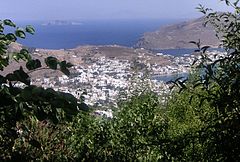 View of the harbor (Skala) 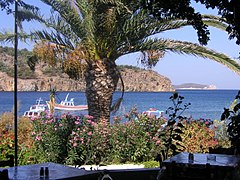 The birth of Patmos according to Greek mythology

According to a legend in Greek mythology, the island was originally called "Letois", after the goddess and hunter of the deer Artemis, the daughter of Leto. It was believed that Patmos came into being thanks to her divine intervention.

The myth tells how Patmos existed as an island on the ocean floor. Artemis frequently visited Caria, the mainland across from Patmos, where she had a shrine on Mount Latmos. There she met the moon goddess Selene, who threw her light on the ocean and revealed the sunken island of Patmos.

Selene always tried to get Artemis to bring the sunken island to the surface and thus to life. Selene finally convinced Artemis, who in turn received the help of her brother Apollo to convince Zeus to make the island emerge from the sea.

Zeus agreed and the island emerged from the water. The sun dried up the land and brought life to it. Gradually, residents from the surrounding areas, including Mount Latmos, settled on the island and named it "Letois" in honor of Artemis.

History from the classic to the present

Patmos is rarely mentioned by ancient writers. Hence, very little can be guessed about the earliest inhabitants. In the Classical period, the Patmians preferred to identify themselves as Dorians descending from the families of Argos, Sparta, and Epidaurus, further intermingling with people of Ionic descent.

During the 3rd century BC In the Hellenistic period, the settlement of Patmos took the form of an acropolis with an improved defense by a fortification wall and towers.

Patmos is mentioned in the Book of Revelation, the last book of the Christian Bible. The book's introduction states that its author John was on Patmos when he was given (and recorded) a vision of Jesus. The early Christian tradition identified this writer John of Patmos as John the Apostle. Because of this, Patmos is a destination for Christian pilgrimages. Visitors can see the cave where John is believed to have received his Revelation (the Cave of the Apocalypse), and several monasteries on the island are dedicated to Saint John.

After the death of John of Patmos, possibly around 100, some early Christian basilicas were built on Patmos. Among these was a large royal basilica in honor of Saint John, built around c. 300-350 at the place where the monastery of St. John the Theologian is today.

However, early Christian life on Patmos barely survived the Muslim raids from the 7th to 9th centuries. During this time the Great Basilica was destroyed. In 1088, the Byzantine Emperor Alexios I Komnenos Christodulus granted full authority over the island of Patmos and permission to build a monastery on the island. Construction of the monastery began in 1101.

The island was controlled by the Ottoman Empire for many years, but enjoyed certain privileges mainly related to the monastery's tax-free trade, as confirmed by Ottoman imperial documents in the library. Ottoman rule in Patmos ("Batnaz" in Ottoman Turkish) was interrupted by the initial Venetian occupation during the Candian War between 1659 and 1669, then by the Russian occupation during the Orlov Uprising between 1770 and 1774, and finally during the Greek War of Independence .

In 1912, in connection with the Italo-Turkish War, the Italians occupied all the islands of the Dodecanese (except Kastellorizo), including Patmos. The Italians stayed there until 1943 when Nazi Germany took over the island.

Around 1930, Elijah Muhammad of the Nation of Islam initiated the claim that an evil scientist named Yakub, who lived on Patmos about 6,600 years ago, initiated the creation of the white race through a process of selective breeding.

In 1945 the Germans left the country and the island of Patmos remained autonomous until 1948 when it joined independent Greece along with the rest of the Dodecanese islands.

In 1999, the historic center of the island of Chora, along with the Monastery of St. John the Theologian and the Cave of the Apocalypse, were declared a World Heritage Site by UNESCO. The monastery was founded by Saint Christodulos. Patmos is also home to the Patmian School, a notable Greek seminary.

In September 2008, the Patmos community refused to land a group of undocumented refugees from Afghanistan and Iraq. On the weekend of September 19, 2008, around 134 refugees were rescued at sea. The refugees were taken to Patmos, the closest community, for processing and care. The administration denied them permission to land. Eventually they were sent to the island of Leros, where they were processed and humanitarian aid provided.

The Forbes Magazine named Patmos "Europe's most idyllic place to live" in 2009 and wrote that "Patmos has evolved over the centuries but has not lost its calm, which is one reason people who know it keep coming back". . 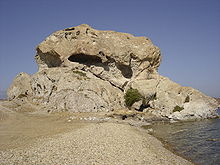 Patmos is located off the west coast of Turkey and the Asian continent. It is one of the northernmost islands of the Dodecanese complex. It is further west than the nearby neighboring islands.

The main parishes of Patmos are Chora (the capital) and Skala, the only commercial port. Other settlements are Grikou and Kampos.

Christian pilgrims frequently visit the island because they are associated with the prophet John and wrote the book of Revelation.

For emergencies, Patmos has a medical center with several doctors on the premises. If residents need hospitalization beyond first aid, they are flown by helicopter (in emergencies) from the island to nearby hospitals or, weather permitting, transported by ferry.

Patmos is a partner of: