Stars are moving What about the sun

The apparent movement of the stars

The rotation of the celestial sphere

The sun, which rises in the east and sets in the west, determines our rhythm of life. If you look at the sky for several hours in the course of a night, you can see that the celestial sphere revolves around itself. This is their daily rotation. The idea of ​​a "celestial sphere" is an ancient Greek one: the stars were thought to be fixed on the inner surface of a sphere. Today we know that the fixed stars are distributed at very different distances in space. We still speak of the "celestial sphere". The rotation of the celestial sphere can be documented photographically: You put the camera on a tripod, align it with the North Star, for example, and expose for a longer period of time (around 45 minutes). The rotation of the celestial sphere is apparent because in reality the earth rotates around itself while the stars maintain their place in the sky. Therefore, the North Star does not move either, it stands in the sky where the elongated axis of the earth meets the celestial sphere. 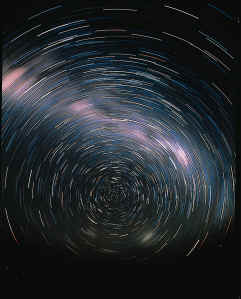 The apparent seasonal movement of the stars

If one observes the starry sky at the same hour in different seasons, one realizes that certain constellations are no longer there and that others are in the sky instead. In "The Alternation of Day and Night" we have already discussed that the earth rotates once in 23 h 56 min 49 s and that it takes 24 hours to reach the same position in relation to the sun again. The double movement of the earth, around itself and around the sun, is also the reason for the apparent migration of the constellations.

Animation: The apparent movement of the stars at different times of the year
The animation as a sequence of images

The stars don't move [1]. The rotation of the earth means that, viewed from it, the position of the stars changes by 1 ° from one day to the next at the same hour. If we resume observation six months later at the same time in the same place, we will see a different part of the sky in the course of the night. The stars that we had in our field of vision at night are now in the sky during the day, but are not visible because of the sunlight.

1: Stars are of course moving, even at unbelievably high speeds for earthly conditions. However, because of their great distance from Earth, this is practically impossible to observe directly.