What was the best company ever

Debate future of democracy: the best Germany of all time

No more confusion! If we want to make a difference, we have to accept what we have achieved. Because in the past most things were worse. 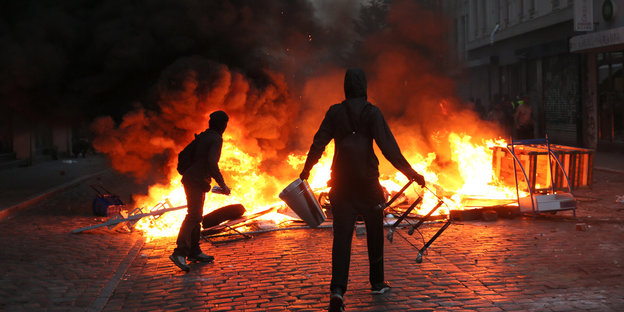 Society can no longer be improved with revolutionary gestures Photo: dpa

Isn't it time to celebrate all that we are? Now that there are enough enemies of our free society, enough opponents of democracy and despisers of diversity? When new rights frowned upon Europe as a declining West and racists proclaimed our government as the destroyer of the German people; when Marine Le Pen presents liberality and French tolerance as the presumptuous habitus of an intellectual elite: shouldn't we then take sides for this open society - literally?

If the revolutionary phrases are invoked by those who hate otherness and want to destroy plurality, then let us dispense with this rhetoric. The others have taken on the radical criticism of the system. And rightly so. Racists have every reason to feel uncomfortable, lovers of patriarchal structures no longer want this world.

Because the feminists, the fighters for peace and tolerance, the rainbow children, the friends of freedom are strong. Trump as a symbol for the old worlds and as a pole star in the soul landscapes of white hate preachers has reminded us of how far we have actually come. Because in fact there used to be no less of his kind. But unlike in the past, such figures have become a scandal for every decent citizen.

We have complained long enough. It was a pleasure to conjure up doom, to mop up and to listen to anti-bourgeois criminal sermons. Every criticism contained a reference to the apocalypse, decay lurked everywhere: in free trade, in the national, global, in Europe, in the border regime; in the chlorine chicken as well as in raising children, clothing and in the state apparatus anyway.

Let's face it: Societies have emerged that are good, better than anything we've ever had before; not only in Germany. The question, of course, cannot be whether we have already reached the state of bliss. That's not the case; There is still too much anti-Semitism, too much racism, too much poverty, people of different skin color have fewer opportunities, we are not doing enough for the environment, we are selling too many weapons and investing too little in peace. The question is whether we are heading in the right direction.

A person who criticizes the "system" logically has to tell a doomed story. She has to prove that it used to be better and is worse today. And that is extremely difficult. The contours of past glory blur on closer inspection. Anyone who thinks, for example, that our democracy is just a sham event, claims that it used to be more real and better.

The hooded young man who stretches to throw the stone to accuse and destroy has been an icon of the left long enough.

But when should that have been? When apartheid still prevailed in the USA? When tough guys in Europe ruled the press and parliament alone? When old Nazis held high positions in Germany and generals with colonial pomp were undisturbed in France and Great Britain? When the legislature simply did not understand what kind of criminal offense that should be: rape in marriage. When loving parents beat up their children with friendly nods from the neighbors? When a househusband was not yet considered a hero and a promise, but a misfortune and accident?

The violence is decreasing

Even if it does not fit into our meta-narrative and the gesture of confusion is so difficult to say goodbye: times are getting better. The Oxford economist Max Roser collects astonishing knowledge about the global upward trend on his homepage “Our World in Data” - and criticizes the media's ignorance of these processes. Not only in the North Atlantic area, but everywhere things are developing for the better: Violence is decreasing (despite all the intensive reporting on every conflict), literacy is expanding, the number of poor has fallen worldwide, both proportionally and in absolute terms.

If we believe that decreasing child mortality is good and hunger is bad, if we welcome the spread of women's rights and the containment of disease, then should we not accept that the systemic question should not be posed with revolutionary fuss? Our democracies deserve our hands-on benevolence, not because they mean paradise, but because their logic encourages criticism and is open to improvement.

We have to be brave

Yes, inequality is increasing within individual countries, but it is falling on a global scale - and the fact that more and more of the poorest can live with dignity is far more important than the fact that the super-rich can afford more and more yachts and jewels. Environmental degradation is also a huge problem, but effective changes are achieved through democratic reform processes, not through apocalyptic blockade mentalities.

We must be brave for this change of heart. Consent is just unattractive - like all the good parties with their honest staff. It is important to vote in order to weaken the right-wing extremists and strengthen our diversity. The morally snobbish abstinence from voting is as pointless as ever. (And don't we all sit in a glass house when it comes to stuffiness anyway?)

The hooded young man who stretches to throw the stone to accuse and to destroy - he has been the global icon of the left for long enough. The new world is more feminine: The new icon shows the young woman bending over her tablet to read: a girl with a headscarf, with an afro, with pigtails, however; it should conquer the world without violence, without narcissistic coolness and without vain joy in the revolution. We should support them. She has already largely taken over our society with her cleverness, but she still has a lot to do.