What is communication about?

Communication could be so easy. At least in theory. In reality, however, it is mostly misunderstandings or disagreements that make interpersonal communication so complicated. The subject is so complex that an entire science is concerned with better understanding communication between people.

An important concept in communication science is the "sender receiver model". It shows simply and clearly how the exchange works and where problems occur again and again that disrupt communication. We explain the sender-receiver model and show what is important for successful communication in order to avoid misunderstandings ... 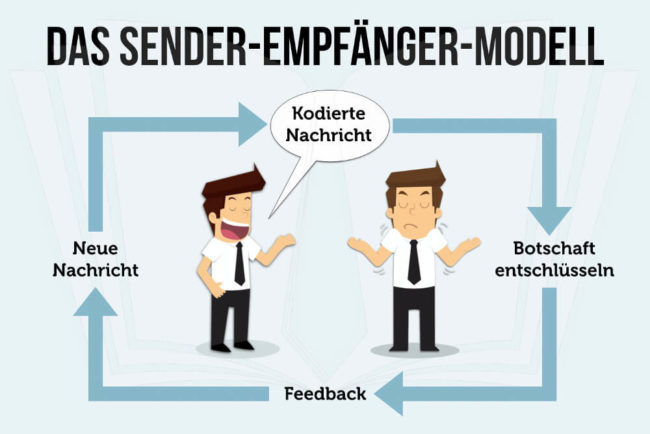 Sender receiver model: what is it about?

The original transmitter / receiver model goes back 70 years and was developed by the two American mathematicians Claude Shannon and Warren Weaver. In the beginning it was about optimizing communication on the phone and reducing breakdowns, but this idea was picked up again and again - for example by Stuart Hall and Paul Watzlawick - and recognized as a fundamental principle in communication studies.

The basic idea: There are always two sides to any communication. The sender who wants to transmit a message and the recipient to whom this information is directed. To pass the message on, the sender uses a code, whereby the communication is not about a sequence of numbers, but about language. In order to understand the message, this code must be decrypted by the recipient. In the last step of the sender-receiver model, there is then a response, feedback or feedback back to the sender.

Goal of the communication process it must therefore be that the content of the message that a sender wants to communicate is correctly recognized and interpreted by the recipient. However, this is only possible if both parties use absolutely the same code. Sounds simple, but unfortunately mostly only works to a limited extent, as there are many possible faults that can cause something to be misunderstood in the truest sense of the word.

For example, the sender and recipient do not speak the same language and the translation falsifies the original content of the message. Likewise conceivable are unintended ambiguities of a statement, misunderstood sarcasm or an unclear manner of expression, which make it difficult for the recipient to decipher exactly what is hidden behind the message. However, the success of the communication does not only lie with the sender; mistakes can also be made on the recipient's side, which lead to misunderstandings. Two well-known scientists get right to the point. The behavioral scientist Konrad Lorenz (1903-1989) is ascribed the following bon mot:

Paul Watzlawick reformulated this to match the transmitter / receiver model and expanded it to include the following formula:

The transmitter / receiver model does not only apply to speech

First of all, the idea suggests that the sender-receiver model relates to a conversation, a discussion or a written exchange. It was developed for this, after all, and language is often still understood as the main aspect of communication. In fact, letters, words and sentences make up only a small part of all communication. To put it another way: What we tell others is largely via other communication channels. Paraverbal communication is often forgotten. This describes, for example, the pitch of the voice, the volume of what is said, the tone of voice, the tempo or consciously (and unconsciously) pauses during speaking. Whether you sound angry and scream or curious, asking at normal volume can completely change the content of what is said, even if the words remain the same.

The transmitter / receiver model also works without words. Body language uses the same principles, only the code used changes. The message is not converted into speech, but into physical signals that must be identified and decoded by the recipient. A shrug means ignorance, a raised corner of the mouth shows disregard, big eyes and raised eyebrows show surprise.

It is precisely here that there are also dangers of using a different code and thus producing misunderstandings. While gestures still work well within a group, they can lead to serious intercultural problems. For example, a thumbs up is a clear sign for us All right, I agree. In Australia, on the other hand, you should be careful as it is a very unkind gesture that you will not make friends with. Modern communication even goes one step further. In the digital age, smileys and emoticons have also become part of communication and in the sender-receiver model they are nothing more than another code to convey a message.

As a theory, the sender-receiver model can help you better understand interpersonal communication. But you can also use it very practically for yourself to improve your communication, to identify problems in exchange with others and to avoid them. Start with the principle of the model and remind yourself that communication is always two-sided. What you say - or want to say - and what your conversation partner perceives does not have to be identical. The reverse also applies: What you understood was not necessarily intended.

By considering the possibility of disruptions in communications, you can learn to correct mistakes instead of just focusing on misunderstandings and the quarrels that may result from them. Always put yourself in the other person's shoes and try to understand them. Anyone who manages not only to be the sender but also to see things a little through the eyes of the recipient can not only show great empathy with such a change of perspective, but also ensure effective communication by avoiding problems and misunderstandings in the first place do not show up at all.

In addition, you have other options for using the transmitter / receiver model and improving your communication:

Without a common code, the transmission of messages according to the sender-receiver model cannot work. Therefore, ask whether there might be problems here. This is usually not something as conspicuous as a lack of language skills, so go into detail.

Pay attention to the feedback

The answer you get from someone you talk to is an important part of the exchange. Pay close attention to whether the feedback is what you expected. If this is not the case, you should address it and analyze the causes behind it. The feedback is not only the direct answer, but also physical signals, facial expressions and gestures. For example, if you pass on a task and the recipient looks stunned and confused, the conversation should not be ended at this point, as there is undoubtedly a need for further clarification.