Are there more animals in the ocean

There are around 8.7 million species of organisms on earth. 6.5 million of them live on land and 2.2 million in the oceans. Researchers of the international project “Census of Marine Life” have now determined these numbers with the help of a new method of family tree analysis. They say they have achieved the most accurate estimate of the number of species ever made. So far, information on between three and 100 million species has fluctuated. A large part of these organisms is still completely unknown to science, the researchers write in the specialist magazine "PloS Biology".

Only 1.25 million species have already been described and cataloged, say the scientists. In contrast, 86 percent of land creatures and 91 percent of those living in the sea were still waiting to be discovered. “The question of how many species exist has preoccupied scientists for centuries,” says study director Camilo Mora from the University of Hawaii. The answer to this is more important today than ever, because human interventions are driving the extinction of species more and more. Today around 59,508 species are recorded for the official Red List of Threatened Species. This does not even make up one percent of the entire world in which we live. "Many species could disappear before we even find out about their existence and their unique niches and functions in the ecosystem," says Mora.

In order to close the large gaps in current knowledge, it is necessary to promote the search for new species and biological systematics more than before, the researchers write. Knowing about biodiversity is not only worthwhile for basic research, but also very specifically, for example, for the breeding of new crops or for the production of medicines. They name coral reefs, the mud of the seabed and the tropical soils as the richest habitats still to be explored.

Researchers first discovered this colorful goby of the species Elacatinus rubIGEis in the Gulf of Honduras in 2010. © Keri Wilk

For their study, the researchers analyzed the distribution of the types of organisms known today across the various branches of the family tree. They only considered those species that have cells with a nucleus - from unicellular algae to mammals. Bacteria, viruses and other microorganisms without cell nuclei were left out.

Similar to an ever finer branching tree, the family tree of living beings also has more smaller branches (species) than thicker ones (families, orders). The researchers calculated the typical proportions between these levels of the family tree and used it to estimate the number of species, including the less complete branches of the organism kingdom. 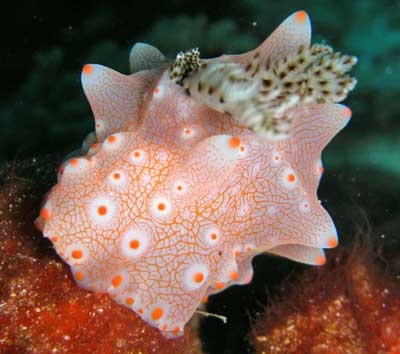 This marine nudibranch (Halgerda batangas) was discovered in the tropical Pacific in 2000. © Steve Childs

The researchers write that the gap between known and unknown species is one of the smallest in plants. 215,644 of an estimated 298,000 species are already recorded here. The situation is far more incomplete with the other groups of organisms: The researchers estimate the actual number of animal species to be 7.77 million, of which only 953,434 are cataloged. In the case of mushrooms, the proportion of known species is even lower: here only 43,271 of an estimated 611,000 species are known.

In order to find the still missing organism species using traditional methods, 300,000 researchers would have to work on them for at least 1,200 years, say the scientists. But new technologies such as DNA comparison could drastically reduce time and costs. (PloS Biology, 2011; DOI: 10.1371 / journal.pbio.1001127)