How can I use sumac in recipes 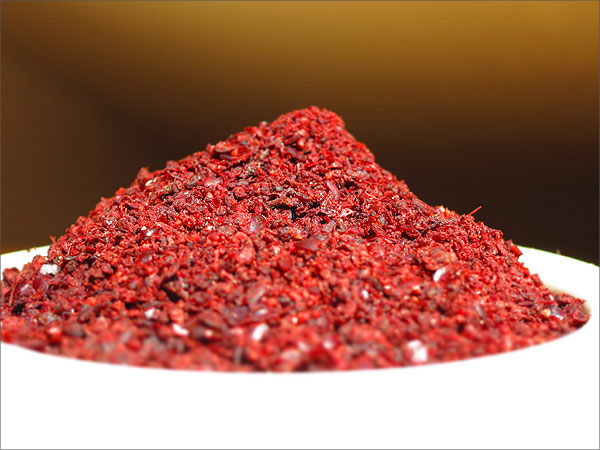 Sumac is a spice made from the fruits of sumac (Rhus coriaria L.) is obtained. The fruits are dried and roughly ground to a powder. The color is red-brown to purple-red. Salt is often added to sumac. This should serve a rounder taste, but is more of a modern marketing tool. Sumac becomes heavier and of course more expensive with the addition of cheap salt. A balanced sumac and salt mix also sounds a lot better than just sumac. The first time you buy sumac you will be a little surprised at its consistency.
Although it is sold as a dried powder, the sumac appears quite moist and coarse. Sometimes it also tends to form smaller lumps. This is typical of sumac and nothing to worry about. The seeds contain up to 15% fatty oil.
The sumac also doesn't smell as intense as one might expect. On the other hand, the taste is all the more pronounced. The smell has a slightly bitter vinegar note.

Sumac is a very popular spice, especially in Turkey and Iran. It is often served with salads and used in high-fat dishes because of its digestive properties. Sumac is mandatory for rice in Iran.

The word about sumac has finally got around in Northern European cuisine, especially since its sour taste makes it an ideal alternative to vinegar and lemon juice. Sumac is considered to be the most acidic spice in the world. The sour and tart taste of sumac is due to the fruit acids it contains. Predominantly malic and citric acid to a lesser extent also tartaric acid, succinic acid, maleic acid, fumaric acid and ascorbic acid.

Sumac also contains tannins in the form of gallotannins. However, these are mainly contained in the leaves and the bark of the plant, which is why these parts of the plant were also used for tanning leather in antiquity or are still used today as a medicine against diarrhea. The name gerbersumach is yet another name used for the herb sumac plant. 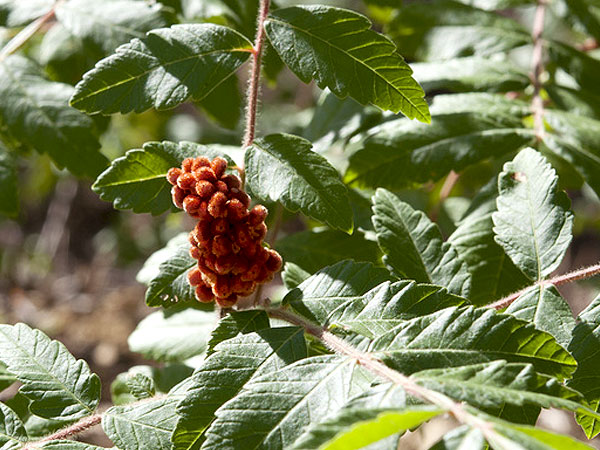 Sumac is obtained from the dried and ground fruits of the herb sumac plant (gerbersumach, dyer's sumac). The correct scientific term is Rhus coriaria L. and the plant belongs to the Anacardia family (Anacardiaceae). Sumac is also the German name of the genus this plant belongs to.

When the famous botanist Carl von Linné first incorporated all plants into a scientific system in the middle of the 18th century, the plant became native and well-known in southern Europe Rhus coriariorum (former name for Rhus coriaria) Namesake of the genus Rhus (German sumac).

To the genus Rhus Today there are still around another 250 species of sumac with a wide variety of properties. The spice sumac, poison sumac, vinegar tree and lacquer sumac are the best-known representatives.

Incidentally, the spice sumac is the only type of sumac that is counted as native in Europe. Even if the common vinegar tree is often found in the wild, it is an ornamental plant introduced from North America that has slowly freed itself from our gardens.

The spice sumach grows mainly as a bush or a smaller tree. The stature height is 0.5 to 4 meters. It has pinnate leaves and its flowering period is from May to July, depending on the location. The five-lobed calyx and the fruit style are brownish hairy.

When fully ripe, the sumac fruits are reddish brown to purple in color and are arranged in large grape-shaped panicles. The single fruit is a small 4-7mm large stone fruit. It is flattened and lenticular. The surrounding pulp is rich in oil and juicy.

The plant grows mainly in the Mediterranean climate on dry limestone soils. The distribution area of ​​the spice sumac covers almost the entire northern Mediterranean area, the northern Western Asia to Central Asia. Southern Italy, Greece and Turkey formed the original distribution area, which has expanded massively in the new era. Sumac is particularly widespread on the Iberian Peninsula and in southern France.
There are now isolated occurrences on the Canary Islands, in Morocco, in Algeria, in southern England or even as far as Central Asia in Tajikistan.

The spice sumac is not really frost hardy. The information about the hardiness of sumac varies from -5 to -10 ° C. Single specimens are said to have been sighted in southern Germany and the plant can survive in sheltered locations for a few mild winters. Otherwise, in our temperate latitudes, only cultivation as a potted plant or a very large greenhouse is possible. The wild form is not really suitable for the pot, but who knows, maybe breeders are already working on a suitable small-stature variety.

Sumac as a remedy

Sumac has not only been used as a spice since ancient times, but also as a remedy. While in ancient times it was mainly known to have a healing effect on the bladder and gastrointestinal tract and the digestive effect of high-fat foods, more recent studies have shown that sumac has a high proportion of antioxidants and vitamin C as a particular strength. Antioxidants are known to neutralize free radicals, which can lead to cancer and heart disease. The aging processes are slowed down. The antioxidants also have a positive effect on inflammatory processes in the body and protect the heart and circulation.
According to studies, daily consumption of sumac in people with diabetes II is said to reduce the likelihood of developing a heart condition as a typical secondary disease.
With its high content of vitamin C, sumac is of course ideal for strengthening the immune system and for preventing colds.
The leaves and bark of the plant (Rhus coriaria L.) have a high proportion of tannins, especially gallotannins. The dried leaves are still used in folk medicine in the Mediterranean region as an antipyretic and are given to treat diarrhea. 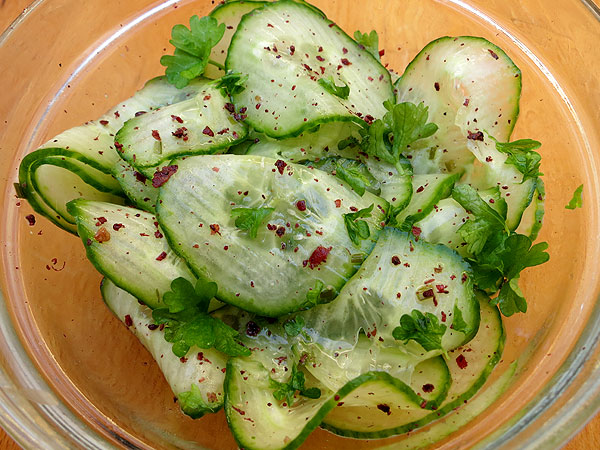 Sumac is finally conquering northern European kitchens. Sumac has been the standard spice in Turkey and Iran for more than 1000 years and is always on the table there. Even in ancient times, in the Roman Empire, sumac was already a sought-after spice.

The taste is characterized by its slightly sour, fruity and tart note. Accordingly, the application is also similar to that of lemon. With sumac, however, the tart note predominates, which results in a completely new taste experience when used as an acidulant for your dishes.

While sumac was mainly used to refine fish dishes in ancient times, its range of applications has expanded enormously to this day. Sumac is so versatile that I can only name a few examples here.

Even if sumac is often used as a substitute for lemon or lime in Arab countries, it is a bit more difficult, if not impossible, when the other way round. In order to give the many oriental dishes a fresh, tart note, it is only recommended to a limited extent to simply use lemon. Sumac has a unique taste and the color component should not be ignored when preparing it.
There is no adequate substitute for sumac on this planet at least. So it is really advisable to always have this spice in stock in your kitchen. 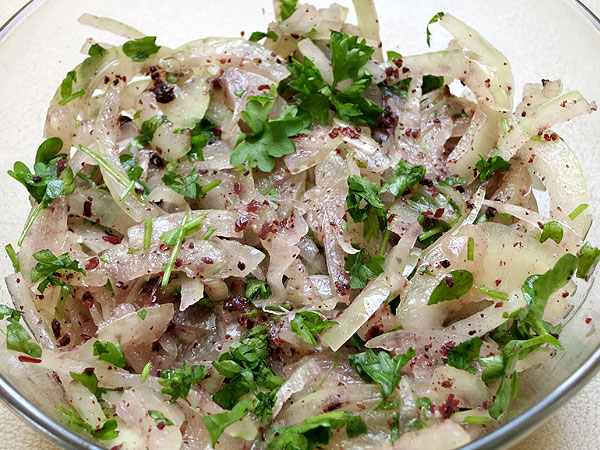 Cut the onions into fine rings.
Squeeze the juice out with your hands 2 to 3 times under running water, depending on your preference Let it drain properly. Add salt and a little pepper and carefully season the sumac according to the taste and keep tasting again and again. It is best to let it steep for 20 minutes and then season it if necessary. The parsley should be fresh. The recipe for this salad is enough for about 4 servings.
Variants: Garlic oil can also be used instead of olive oil. If necessary, red onions or chopped tomatoes also go very well with it.
Use: It is considered a classic Turkish grill side dish, but gourmets also like the sumac salad. 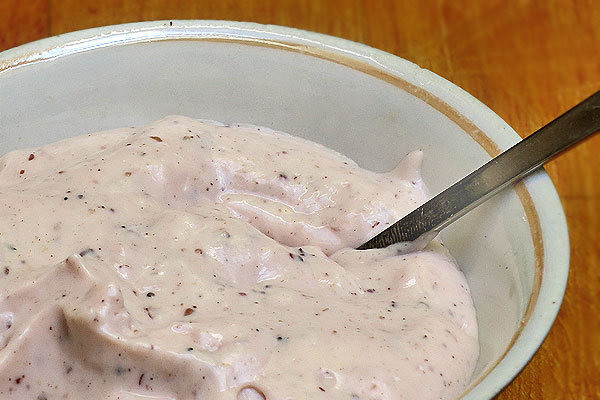 Squeeze the juice from half a fresh lemon. Mix well with yogurt, sumac, a little salt, pepper and olive oil and season to taste. If the dip is too runny, you can thicken it with a little cream cheese or quark. The sumac gives this dip an oriental, lemony-tart note.
Variants: Very finely stacked lemon peel (not in strips) can also be used. Less lemon juice and more pepper make the dip even more bitter.
Use: The sumac yoghurt dip goes wonderfully with eggplant and pumpkin. 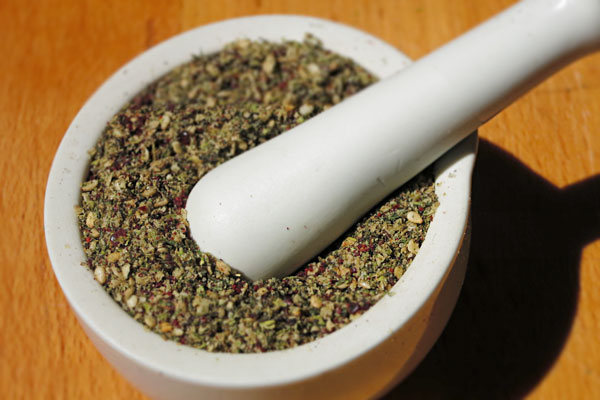 Zatar, Zaatar or Zahtar is a classic oriental blend of spices from Arabic cuisine. This can easily be made by yourself. The main ingredients are the zatar herb (Syrian marjoram), roasted sesame, sumac and salt. Since the zatar herb is not so easy to get in this country, you can also use a mixture of normal marjoram, thyme and oregano as a substitute. Mix all herbs well and grate finely in a mortar.
Variants: 1 teaspoon coriander could be added to the mixture depending on your taste preferences. If necessary, only thyme without marjoram and oregano would work as a zatar herb substitute. Then use more teaspoons of thyme. Otherwise just try a little.
Use: Zatar is traditionally eaten with flatbread that has previously been soaked in olive oil. The spice mixture is often used with grilled or roasted meat. Be sure to try zatar on tomatoes, fried potatoes or pasta.

If you also have a great sumac recipe or know another variant of the recipes presented here, then the readers of this page would certainly be happy about your contribution. Please tell us about your experiences with sumac. write a comment

You can buy sumac in Germany mainly in shops that specialize in Mediterranean or Oriental foods and often also at the Turkish greengrocer around the corner. In these shops the range of spices is usually very large. Feel free to ask the staff and save yourself the time searching. You can definitely buy sumac there.

In the Turkish and Iranian countries, sumac is also called sumak or somak. So it is quite possible that the label says Sumak or Somak. In the Greek specialty shop, Raudi (Ραuδι) or Soumaki (Σοuμακι) and the Italian Sommacco could be on the packaging. When you buy sumac, make sure that no salt is added. It only increases the price due to the additional weight and you will probably already have salt at home.

Sumac can often be bought ready-made in a spice shaker. In this case it is necessary to add salt as a flow and drying agent. Due to its slightly moist and sticky consistency, sumac is not really suitable for use in the spice shaker.
For this reason, sumac is traditionally only roughly ground or crushed and distributed onto the food from a vessel with a spoon or your fingers.

As with all great products, there are also differences in quality with sumac. The best quality sumac you can buy is light red in color and has no added salt. This quality is more fibrous than crumbly in texture. The lighter color and the fibrous structure are due to the fact that very little of the seed kernel is ground but mainly the pulp is processed. The core contains more of the purple color and additional bitter substances, which reduce the quality.

The sumac is best stored in a dry, dark and airtight vessel made of glass or ceramic. This way, the aroma, ingredients and consistency are retained the longest. Because of the acids, containers made of plastic or metal are not suitable for storing sumac. Even if the bought metal spice jars look very decorative, they are not recommended for long-term use.