What is rating and feedback

MR: Suppose there is a closest society art. Then the simple fact is that we, as lecturers and artists, have the task of accompanying these people in the society of the future. Various formats are also used, which are known under the terms "Dialogic learning model"1, "Feedback method according to DasArts"2 or "Liz Lerman's Critical Response Process"3 figure and which have recently created a remarkable pull effect among students and lecturers. Do you think that these methods should play a role in the next generation of artists who will certainly teach again?

WK: The fact that these methods have developed at all is already a response to a development in the artistic field and follows a need to strengthen authorship, to detach the author's idea from the overpowering curator of defined horizons. The American choreographer Liz Lerman, who was trained in a world of the master-student relationship, writes in her book Liz Lermans Critical Response Process4 about a discomfort in her own work as an artist, which z. For example, one consequence of this was that criticism during their training was fed exclusively from the experience of their lecturers, without any form of transparency being maintained. All of the models we are talking about here are now essentially aimed at creating transparency with regard to the levels of judgment or quality that are at issue in the artistic teaching / learning situation. It is precisely the subjective position of the author or creator that should be strengthened and made more independent of the judgment of others, which ultimately dilutes what is one's own.

SR: Karim Benammar from the Dutch academy DasArts put it this way: He says that you fight against traditional learning by making a new proposal on how to harness the group, peer-to-peer learning. The diversity of the group is harnessed and is in contrast to the traditional model of a single leading figure, which is used as a guide. For the students there is the chance to become independent through the different perspectives that there can be on the work.

WK:You could also say that you release the students from the sole interpretative sovereignty of the other, the lecturers, and give space and opportunity to build up your own interpretation skills. In the dialogical learning model there are e.g. B. the possibility of assessing the result of a task based on criteria previously negotiated collectively. When negotiating criteria, everyone has to make the respective contexts transparent from which they want to judge. This makes a dispute about the relevance of individual contexts possible.

SR: What exactly do you mean by "judging"? I have noticed that when applying and investigating the DasArts method or the Critical Response Process, I absolutely left out the terms “assessment” and “judgment” because I was of the opinion that they had nothing to do with feedback at all but, on the contrary, have strong normative connotations. During my visit to the Bachelor's degree in drama, however, I was able to see that you can see these terms as something very positive and constructive. Can you elaborate on what you mean by that?

WK: In our work with the dialogic learning model, we have tried to strengthen the productive potential in judging and evaluating. The normative judgment can be very productive for us if we succeed in making the qualities of our own work transparent and then continue to work out of this awareness of the quality and its strength. Quality is identifiable and negotiable and allows students to derive tools for generating this quality from their own actions. They then develop out of their own context and at the same time always in relation to other contexts. This strengthens your own position and ability to act. This also means that students, as experts from the outside, assess the work of others while observing them. In addition to the creation of criteria, the change of perspective is a further step in making things visible and creating transparency.
The key step, however, remains: When assessing, do I make the context transparent from which I judge - or do I just judge.

SR: It starts with asking questions. This is z. For example, with Liz Lerman, a core aspect of the method is that you even learn to ask questions of the other neutrally without your own judgment being included. With the question “Why is the wall so green?”, In which the verdict is “it is too green for me”, one does not make it transparent why one is even emphasizing the green color. That would also be an example of the necessity of the “perspective feedback” format of the DasArts method, in which the perspective from which something is viewed is made clear. An opinion is converted into a need and embedded in a context, e.g. For example: "As a lighting designer, I need brighter light."

WK:With the DasArts method, it is also essential that the students do the introduction themselves, including the initial contextualization of the project. So not just “I'll introduce my project”, but he or she is absolutely required to provide an initial contextualization and thus an offer for dimensions of interpretation. The first step “outside” lies with the presenter and not with the others. But they, in turn, have to act accordingly.

FBH: A central element in all methods seems to me to be a very binding structure, which includes Ways of speaking, assigning tasks and roles, or defining criteria. So that it becomes clear who is speaking from which point of view, who is in charge and what is being spoken of. So I enter into a relationship with others through the rules of the game, and not through a teaching-learning relationship. And the more consistently these formats are adhered to, the more freely can one apparently think?

WK: Exactly. A regulated form of communication in which I am not delegated into a personal relationship.

SR: What connects the different models is a turnaround: from lecturer-centered to student-centered. So not just a turn to authorship, but also to learner orientation. The process management lies with the feedback recipient. As Liz Lerman writes in her book, she suddenly noticed that if she was in control of the process, she could actually receive much better feedback.

MR: In a set-up like this, I am on an equal footing with whoever, whether there are lecturers or other students in the room, it doesn't matter, it mixes. The framework conditions of the feedback formats can also be used to show those elements of one's own work that the presenter has doubts about, in order to then share them with the group and release them for joint investigation.

SR: At the beginning you mentioned the suction effect that the various feedback methods create on those who have experienced them. The feedback givers concentrate consistently on the artist's concept or idea. Her goal is to have recognized and described the potential of the work at the end, with which the artist can continue to work. Karim Benammar calls this “an increase in what works”. Urs Ruf calls it “developing what is successful”.
I think that this fundamentally appreciative attitude in dealing with one another and at work and what it does in combination with the established structures is the main reason for this, yes, suction effect - I call it: an experience of happiness.

1.) The Swiss pedagogue and didactic specialist Urs Ruf is co-author of the "dialogic learning model" and, on behalf of lecturers from the Bachelor's degree in Acting at the Zurich University of the Arts, started to develop learning and evaluation strategies based on a joint process on the given needs of the curriculum. Today, the model is an integral part of training in various versions.
2.) The philosopher Karim Benammar was commissioned by the Master's degree in Theater DasArts in Amsterdam to work with the lecturers to develop a method for their feedback sessions. The method is divided into clear formats, which you can adapt to current needs when used. The feedback method known as the “DasArts method” has met with great approval beyond national borders.
3.) The American choreographer Liz Lerman has developed her own feedback method for her company to make working together more productively. Her method "Liz Lerman's Critical Response Process" has found widespread use in America - in both artistic and non-artistic areas.
4.) Liz Lerman, John Borstel, Liz Lerman’s critical response process. A method for getting useful feedback on anything you make, from dance to dessert, o. O. 2003. 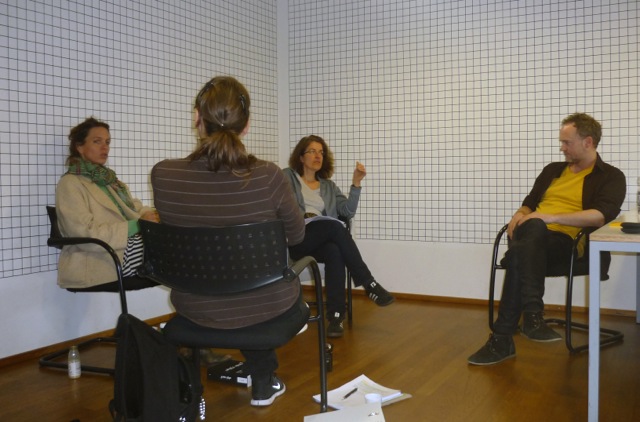 (* 1975). Performance artist and freelance mentor. In 2013 she completed her Master of Arts in Art Education at the Zurich University of the Arts, specializing in individual and group mentoring. As an initial training, she completed training in physical theater and then studied fine arts. In her performances she examines the subtle boundaries between everyday life and staging.
http://www.suzanarichle.ch
http://mt.suzanarichle.ch

combines theory and practice of theater as a lecturer at the universities of the arts in Zurich and Bern, as a freelance dramaturge and curator, and as an expert in the performing arts on committees and juries. From 1999–2004 she was head dramaturge at the Neumarkt Theater in Zurich, from 1993–1997 at the Schauspiel Staatstheater Stuttgart and from 1989–1993 at the Freiburg Theater.

(* 1971), Lecturer BA / MA Theater at the Zurich University of the Arts for speaking, voice, text. Involved in the development of teaching and learning forms at the ZHdK as head of the Teaching & Learning Commission, as a member of the Dossier Conference on Teaching and as a team member in the "Dialogic Teaching and Learning" development project in the BA Theater teaching team.

Dr., is a freelance cultural scientist, exhibition curator and mentor. In recent years she has worked at various institutions in the secondary and tertiary education sector (ETH Zurich, Zurich University of the Arts, Atelierschule Zurich) practically and theoretically with process and project-based teaching / learning processes in which mentoring is an essential element.