Can TRT be used temporarily

The short thermal response test helps to assess the quality of the backfilling of a geothermal probe. 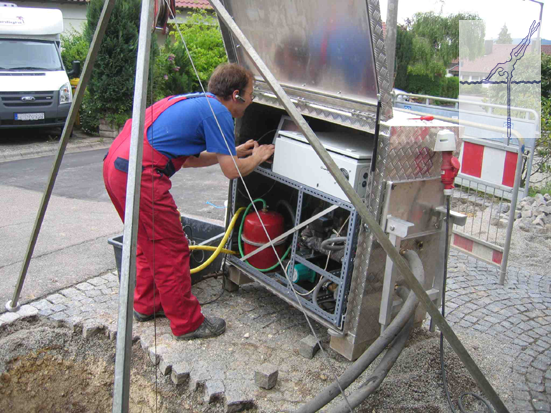 In a short thermal response test, the backfilling of a geothermal probe (EWS) is temporarily heated with a high energy rate. Multitemporal temperature profile measurements after completion of the energy supply observe the thermal behavior of the backfill. The idea is that inhomogeneities in the backfill, in particular the occurrence of water, cause different thermal reactions during the heating or cooling phase due to their heat capacity and thermal conductivity, which differ greatly from the backfill matrix.

In the first step, the resting temperature profile is recorded. This reflects the original temperature distribution over the depth, which is determined by the respective seasonal influences and the local geothermal gradient.

In the second step, water heated to approx. 30 ° C is circulated for approx. 1 hour in one of the U-tubes with a heat output of 60 to 80 watts per meter. A modified TRT system is used for this. 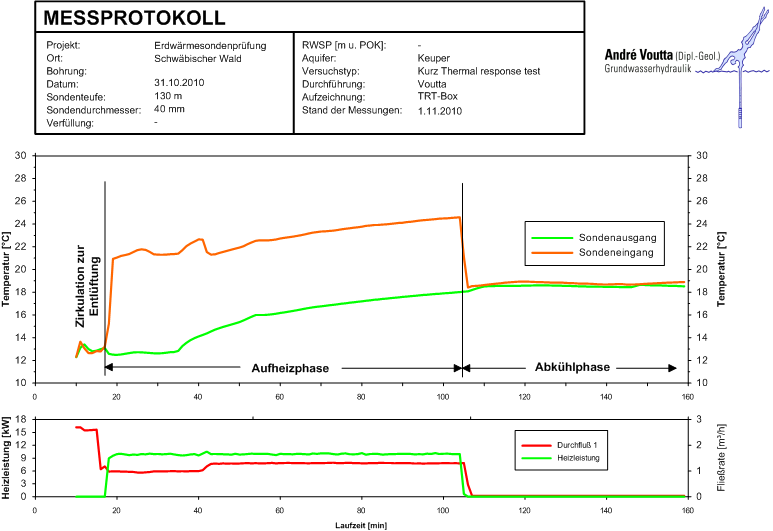 When the circulation begins, the temperature gradient is first equalized. As a rule, this means that the originally higher temperatures initially decrease in depth. As the energy supply progresses, the U-tube leg, through which the heated water is supplied, moves the warming front into the depths, passes through the lowest point and finally moves back up gradually in the second U-tube leg until the warming front is the exit of the second U-tube leg. During this process and with the further supply of thermal energy via the circulation, the backfill is gradually heated. If the backfilling is complete, there is a comparatively uniform warming up. Only the changes in position of the probe tubes among each other over the depth influence the temperature profile during the heating phase and at the beginning of the cooling phase.

In the case of defects in the backfill, missing backfill, locally increased water content, standing or even flowing water, temperature anomalies can be observed in the temperature logs, which are measured in the second U-tube probe after the heating phase has been completed.

Especially increased water contents show a different reaction pattern. Due to the approx. 4 times higher heat capacity of water compared to the backfill matrix, more heat energy is stored in the matrix during the heating phase without the temperature increasing to the same extent as in the backfill. This fact becomes clear from a striking negative temperature anomaly at the end of the heating phase. In the following cooling phase, the water-containing matrix, which is increasingly enriched with thermal energy, gives off thermal energy with a delay due to the approx. While in the section with backfilling the temperatures cool down again comparatively quickly - lower thermal energy reservoir due to the lower heat capacity and high thermal conductivity - in sections with increased water content, starting from a lower temperature level, only a noticeably slower cooling can be observed, which under certain circumstances can also temporarily local temperature increase. This effect is due to the fact that more heat energy has been stored in the heat energy reservoir filled up during the heating phase, which is now returned according to the energy gradient and here can lead to a temporary increase in temperature. 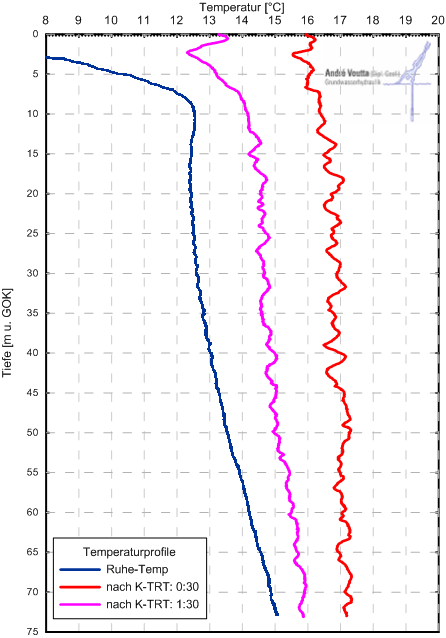 Locally increased water content in the area of ​​the backfill 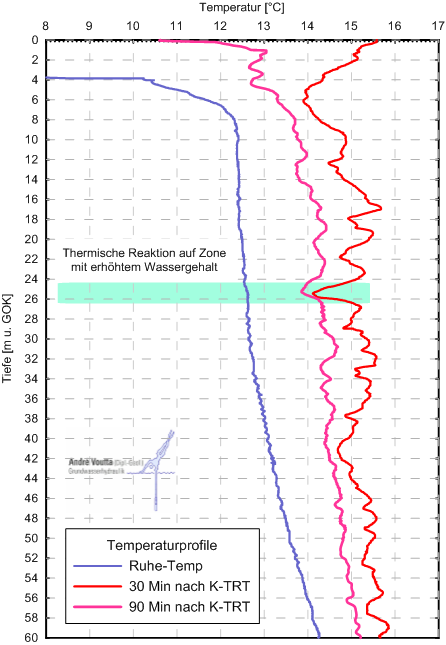 The temperature profile over the depth recorded 30 minutes after the heating phase shows an abnormality at 25.5 m and above sea level: Over a section of 80 cm, the thermal reaction to the heating is approx. 1 ° K lower than above and below it Zone. After a cooling-off phase of 1:30 h, the temperature stagnates here while it otherwise decreases. Obviously, the supplied energy is not stored in the backfill during the heating process, but reaches a medium with a higher heat capacity - this is expressed in the lower temperature increase - which in turn releases the energy more slowly in the cooling phase due to its comparatively lower thermal conductivity. Here is a small-scale zone with an increased water content: water has about four times the thermal capacity and a quarter of the thermal conductivity of the backfill.