Barrack Obama is a philatelist

Barack Obama wrote a letter to his daughters Malia and Sasha for a weekly magazine audience of millions. Writing is almost an anticipated inaugural speech.

The number of open letters to the new President Barack Obama is likely to be in the thousands: almost everyone has advice ready for the 44th President of the United States. Now Barack Obama has written an open letter himself - to his two daughters Malia and Sasha, who are ten and seven years old. The letter accompanies the cover story of the free weekly magazine “Parade”, which is enclosed in more than 400 American daily newspapers on Saturdays and Sundays. With a circulation of more than 32 million copies and a good 71 million readers, “Parade” is the most widespread and most widely read magazine in America. 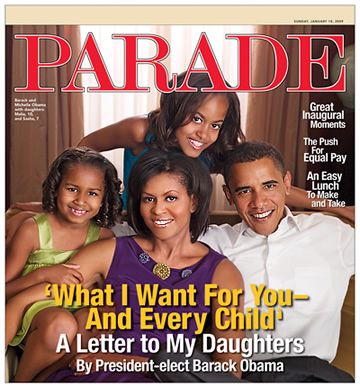 The “multiplication potential” of a magazine like “Parade” should not be underestimated, and that is why Barack and Michelle Obama decided - certainly together - to comply with a request from “Parade”: the future president, who is also “a devoted family man” , may shortly before his inauguration “get personal and tell us what he wants for his children”. So Obama wrote the open letter to Malia and Sasha, which can be read in advance on the "Parade" website and will be read by millions of people by the time of the inauguration on January 20th.
It is not just a letter to the daughters, but to all children in America and quite actually - as is the case with great speeches and writings by "leaders of the free world" - to all human children. Obama concedes that the many trips of the past two years during the almost endlessly long election campaign and especially since the many junk foods on the way may have been a lot of fun. But it was "not always easy" for both of them and also for mother Michelle. And even the promise to bring a pet to the White House, soon to be honored, could "not bring back all the time we were apart."

Incidentally, the decision as to which breed of dog the future "First Dog" will belong to seems to be imminent: it will either be a "Portuguese Water Dog" (left) or a "Labradoodle", a cross between a poodle and a Labrador. 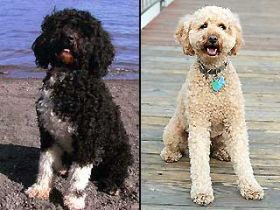 In any case, the "first dog" has to be hypoallergenic because Malia is an allergy sufferer. Incidentally, a representative survey has shown that Americans want to see a crossbreed "first dog" in the White House in a two-to-one ratio instead of a purebred dog. Obama himself has long expressed this preference in connection with the desire to bring a dog from an animal shelter to the White House instead of buying what will soon be the nation's most famous pet from a breeder. After all, the dogs in animal shelters are mostly “crossbreeds like I am,” said Obama, and what is known in German as a promenade mixture would therefore suit him and his family well. If six out of ten Americans have a pet and if the “first dog” embodies the American dream like its master in the White House - a hybrid from the simplest of backgrounds can make it to the top - then you can be sure that Obama's decision will be made for a pet, and in choosing it, political and philosophical considerations played just as important a role as practical ones.

Of course, Obama's letter to his daughters is not primarily about the American dream of a dog in the White House. Rather, Obama explains what he hopes for his two daughters and for all children in America and why he "took his family on this adventure" in the first place. In fact, the Open Letter to Malia and Sasha (see text below) is something of an anticipated inaugural speech for children. Every child should have the opportunity to "attend a school that lives up to their potential", they should be able to start university studies "even if their parents are not rich", they should then find a good job and later time for their own family and be able to “retire with dignity”. It is yet another version of the American dream of building a world "in which your dreams reach no limits and no accomplishments are out of reach". America, Obama reminds us of a doctrine of his grandmother from Kansas, is “not great because it is perfect, but because it can always be made better”.

In initial reactions, Obama's open letter was soon celebrated as a great manifesto by a great man, others found the “saccharine style” difficult to digest.

In any case, the American Post Office, USPS, has not ripped off and has also published an Obama letter. But there is nothing in it. It's just the envelope of a first day cover with the election day stamp. It is a collector's item for philatelists and a souvenir of a historic day. The letter with a picture of Obama's speech in Chicago on election night (photograph by Jewel Samad for AFP / Getty Images) can be obtained at any post office for eight dollars.

And here is the wording of the letter to the "First Daughters":

I know that you've both had a lot of fun these last two years on the campaign trail, going to picnics and parades and state fairs, eating all sorts of junk food your mother and I probably shouldn't have let you have. But I also know that it hasn't always been easy for you and Mom, and that as excited as you both are about that new puppy, it doesn't make up for all the time we've been apart. I know how much I've missed these past two years, and today I want to tell you a little more about why I decided to take our family on this journey.

When I was a young man, I thought life was all about me - about how I’d make my way in the world, become successful, and get the things I want. But then the two of you came into my world with all your curiosity and mischief and those smiles that never fail to fill my heart and light up my day. And suddenly, all my big plans for myself didn't seem so important anymore. I soon found that the greatest joy in my life was the joy I saw in yours. And I realized that my own life wouldn't count for much unless I was able to ensure that you had every opportunity for happiness and fulfillment in yours. In the end, girls, that's why I ran for President: because of what I want for you and for every child in this nation.

I want all our children to go to schools worthy of their potential - schools that challenge them, inspire them, and instill in them a sense of wonder about the world around them. I want them to have the chance to go to college - even if their parents aren't rich. And I want them to get good jobs: jobs that pay well and give them benefits like health care, jobs that let them spend time with their own kids and retire with dignity.

I want us to push the boundaries of discovery so that you’ll live to see new technologies and inventions that improve our lives and make our planet cleaner and safer. And I want us to push our own human boundaries to reach beyond the divides of race and region, gender and religion that keep us from seeing the best in each other.

Sometimes we have to send our young men and women into war and other dangerous situations to protect our country - but when we do, I want to make sure that it is only for a very good reason, that we try our best to settle our differences with others peacefully, and that we do everything possible to keep our servicemen and women safe. And I want every child to understand that the blessings these brave Americans fight for are not free - that with the great privilege of being a citizen of this nation comes great responsibility.

That was the lesson your grandmother tried to teach me when I was your age, reading me the opening lines of the Declaration of Independence and telling me about the men and women who marched for equality because they believed those words put to paper two centuries ago should mean something.

She helped me understand that America is great not because it is perfect but because it can always be made better - and that the unfinished work of perfecting our union falls to each of us. It's a charge we pass on to our children, coming closer with each new generation to what we know America should be.

I hope both of you will take up that work, righting the wrongs that you see and working to give others the chances you've had. Not just because you have an obligation to give something back to this country that has given our family so much -although you do have that obligation. But because you have an obligation to yourself. Because it is only when you hitch your wagon to something larger than yourself that you will realize your true potential.

These are the things I want for you - to grow up in a world with no limits on your dreams and no achievements beyond your reach, and to grow into compassionate, committed women who will help build that world. And I want every child to have the same chances to learn and dream and grow and thrive that you girls have. That's why I've taken our family on this great adventure.

I am so proud of both of you. I love you more than you can ever know. And I am grateful every day for your patience, poise, grace, and humor as we prepare to start our new life together in the White House.

Obama writes to his daughters - and to all human beings

Barack Obama wrote a letter to his daughters Malia and Sasha for a weekly magazine audience of millions. Writing is almost an anticipated inaugural speech.

An error has occurred. Please check your entries.