Deer move in the rain

No better prospects are reported for the coming days either. So far I have used every opportunity to sit down in the morning, in the afternoon and in the evening. Even spent the night in the forest on the pulpit for the first time, so as not to irritate everything in the morning by starting again. The thought of me somehow still in the evening, even under these extremely uncomfortable weather conditions, to climb a pulpit that is tempting Wildacker is closest to the neighboring area. As in previous years, my father and I heard the restrained voice of a perhaps mature deer from this direction from time to time. A constant back and forth struggles in me: raised hide, yes? No?

First of all, I decided to say no, so we sit down with a cup of tea by the cozy fireplace. Is it the glass of Danziger Goldwasser that inspires me? Before the blanket hits my head, the decision is made to go back to the station, even if it is just to get some fresh air. In no time at all, now at an advanced hour, I pack my things and drive into the forest in the pouring rain. The Lada's windshield wipers creak. The forest paths are so soft that I have trouble driving the car in the lanes. When I get to Herrensand, I stop briefly to reconsider my plan.

I hear an inner voice that advises me: There it is Stag pulpit, at least you'd be sitting in the dry. Mr. Basener, our dedicated employee, supported this four-meter-high pulpit a few days earlier with side reinforcements. I park the car and hurry to the stag pulpit in the unstoppable rain. When I arrive at the high seat, I think of a cartoon by Geilfuß with the title: “Before a difficult walk”. It trickles through a hole in the roof onto my seat at regular intervals. 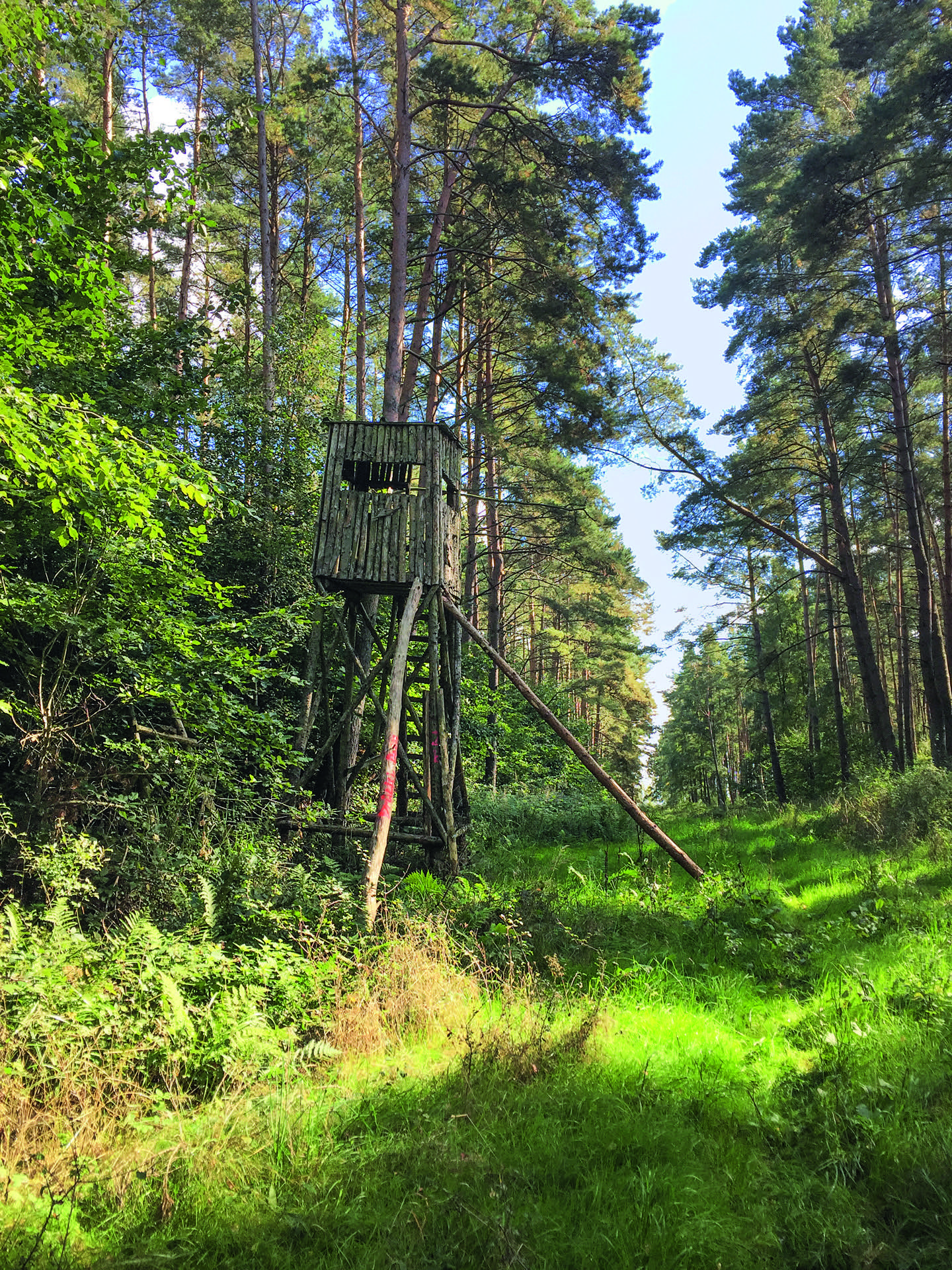 The stag pulpit: this is where the author came across the mature stag - despite the storm and rain.

Wait for the rain - is the deer coming?

The crackling sound of the rain surrounds me, light fog rises, no voice can be heard, and the old hunter's wisdom: When the wind is chasing, the hunter shouldn't hunt, comes to mind. The mood before the evening when my father and I still had such a beautiful residence on the Deer's pulpit have enjoyed, the midsummer temperatures and the smell of dry hay remind me of a wonderful evening in Africa. A fabulous concert of an estimated eight to ten deer. I hope again in the old, familiar voice that we heard from this direction in the years before and maybe yesterday evening as well.

The pulpit in the wind

The wind is right in my face, coming from the Herrensand, and blows into a thick beech tree, so that in all probability nothing is to be expected from this direction. Since I am sitting quite high, there is hope that my wind will be carried over the game at this height. My father set up this high seat to be as close as possible to the annual rutting events. Unfortunately, we never climbed this pulpit together, as it is usually unfavorable to the wind direction. So this seat was a bit forgotten. After a two-hour concert of drops Storm and rain I think about the dismantling to return home so that I can have a more cozy and above all drier evening together with my father. I lift my glass one last time and systematically search for the surroundings with tall ferns and thick brambles. I pause briefly at a brownish “bush”, perceive a movement - a deer? Just stay calm now!

I am already trembling all over and find it difficult to bring the binoculars to rest on the target. My first gut feeling: this could be a mature stag! In the days before I had had the opportunity to do various Deer from sixth to eighth head to speak to in peace. But my father was there too, who always gave me the necessary calm with his confirmation.

Now I have to act prudently, not rush into anything, above all to calm down again and go through my checklist, which I saved in my head to address a red deer, in peace. I know that myself experienced deer connoisseurs mistakes happen between the eighth to the tenth head, especially when speaking to deer. I want to avoid that in any case, so as not to be the first in our family to hit a bad shot - not to mention the unpleasant consequences.

Keep calm despite the hunting fever

A deer has risen in front of me and is moving heavily from left to right, around 70 meters away, parallel to the "Hirschkanzelschneise". He looks incredibly massive! Beefy head! Strong carrier! Horizontal carrier posture! Carrier and body as if from one piece! An old stag's dewlap! Gray face! Antlers difficult to address, 14 to 16-enders! One would have believed that the posture was caused by the heavy rain. My weapon I have unlocked the safety lock in the meantime, but I'm shaking so terribly that I decide not to take action yet. I try to have a steadier support for my binoculars with my knees drawn up and the feet resting on my seat. The pulse is racing. By taking a deep breath, I hope to get a grip on it again. My inner voice encourages me not to shoot yet. Stay calm! You are still missing the entire impression! The body of the game is covered by fern almost up to back level. I still need to know how the body weight is distributed. Covered by a thick tree, this knowledge is impossible for me. Before I know it is that deer disappeared from my field of vision.

A missed stag of life opportunity?

Thoughtful hesitation arises in me: Was this the only opportunity in 15 sitting that you have not taken advantage of now? Why did you hesitate? Have you been too slow to respond? Why is your beloved papa not here to help you speak to it! For a short time I think about treeing down to stalk the deer, but the risk of being noticed by fallow deer or other deer is too great. Reason wins. The wind would not have favored this project either. With a heavy heart I decide that I have missed a good chance to stay here until dark. 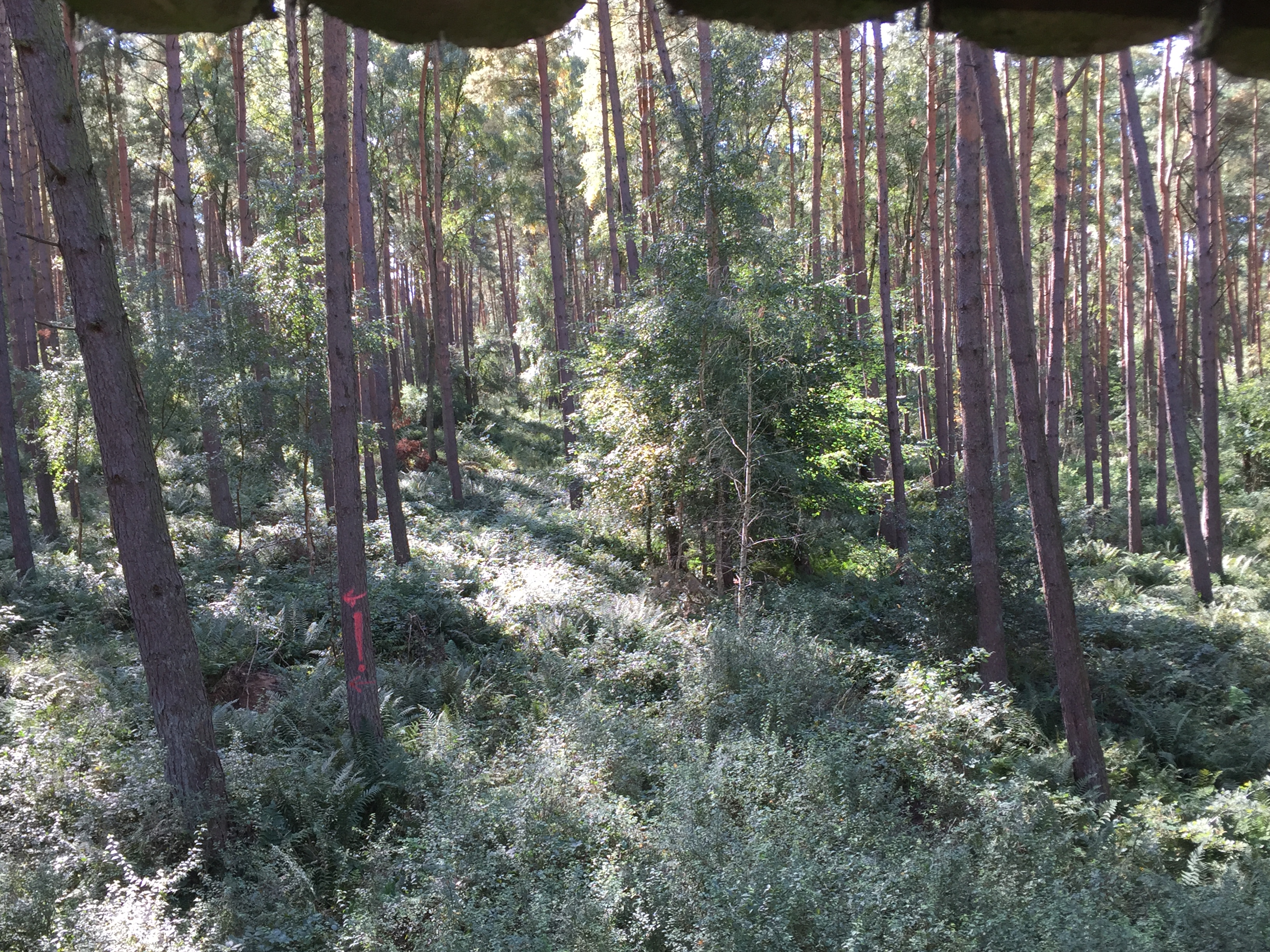 Here the stag of life moved

Suddenly I see movement again. This time a stag is pulling at the same height, but in the opposite direction. One look through my glass and it is immediately clear to me: it is him! In order not to let this opportunity pass me by, this time I pick up my weapon and see through the telescopic sight that the body mass is clearly shifted forward and thus all criteria indicate a really mature deer. When the deer briefly waits, I leave it .30-06 evolution fly and am amazed at how calm this process is. What is less reassuring is that the deer does not draw and pulls away in a light troll. I am relieved when I see the deer collapse after a short escape of about 50 meters.

The stag of life lies - The seconds after the shot

That this stag has returned? Did I really do everything right? I'm so excited that my teeth are chattering and I'm shivering - no, it's been the strongest chills by now. For the next few minutes I try to calm down. I learned from my dear papa to give the game a worthy time to perish in peace. Such moments of hunting make me happy and thoughtful at the same time. I wonder where we get the right to kill such a majestic animal, the King of the German Forest. The words of the Spanish philosopher Ortega y Gasset sound reassuring in my ears that a good hunter always vacillates between prey drive and compassion.

Finally settled down and before dark, I dismantle to see my deer up close. Breast-high ferns make this project seem more difficult than expected. The first brief attempt to find the deer does not succeed. In order not to lose any more time, I decide to go home to inspire our Teckel Baazi to look for him, although I suspect that he will refuse to work in the tall brambles and ferns. 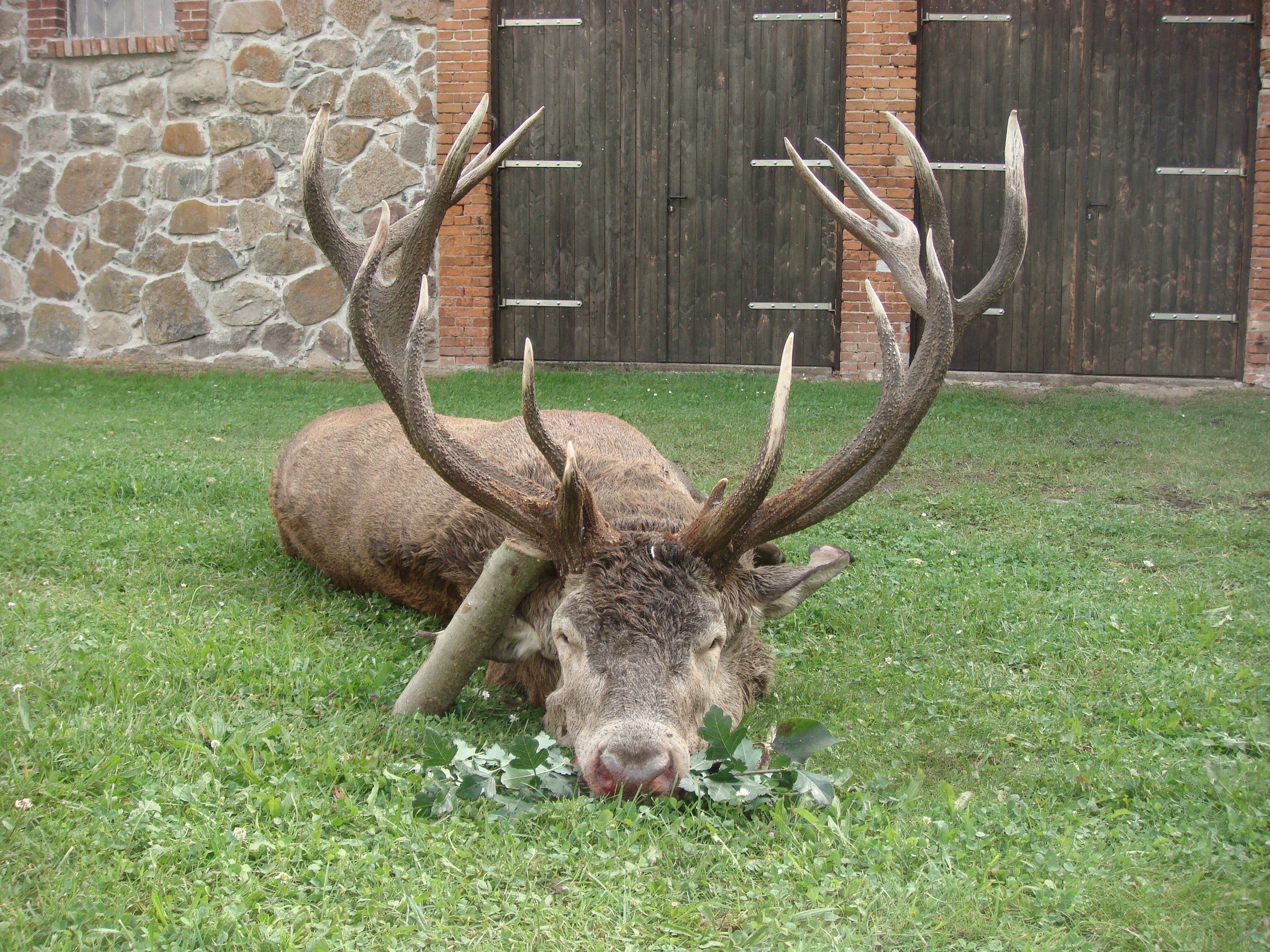 Short search in the rain

Back at the scene of the event, my initial assumption should be confirmed. Angry and amazed at the same time because of the pouring rain, the dachshund looks at me from the depths of the ferns and the thicket of blackberry tendrils, stunned and without any will to move. But the following idea comes to me! I take the dog and carry it in front of me like a dowsing rod by outstretched arms. He immediately picks up the scent and shows me the escape route of my slain deer. But because I don't really want to believe that from this height, I consciously go in the opposite direction. Father's beloved wire-haired dachshund is not deterred and turns his head back in the original direction. In doing so, he now also engages the gears on his short legs and moves them in the air as if he could walk over ferns. And suddenly, as expected, I am standing in front of my deer! A 16-ender with extraordinarily strong antlers that I had never imagined in my wildest dreams. Baazi and I are over the moon. 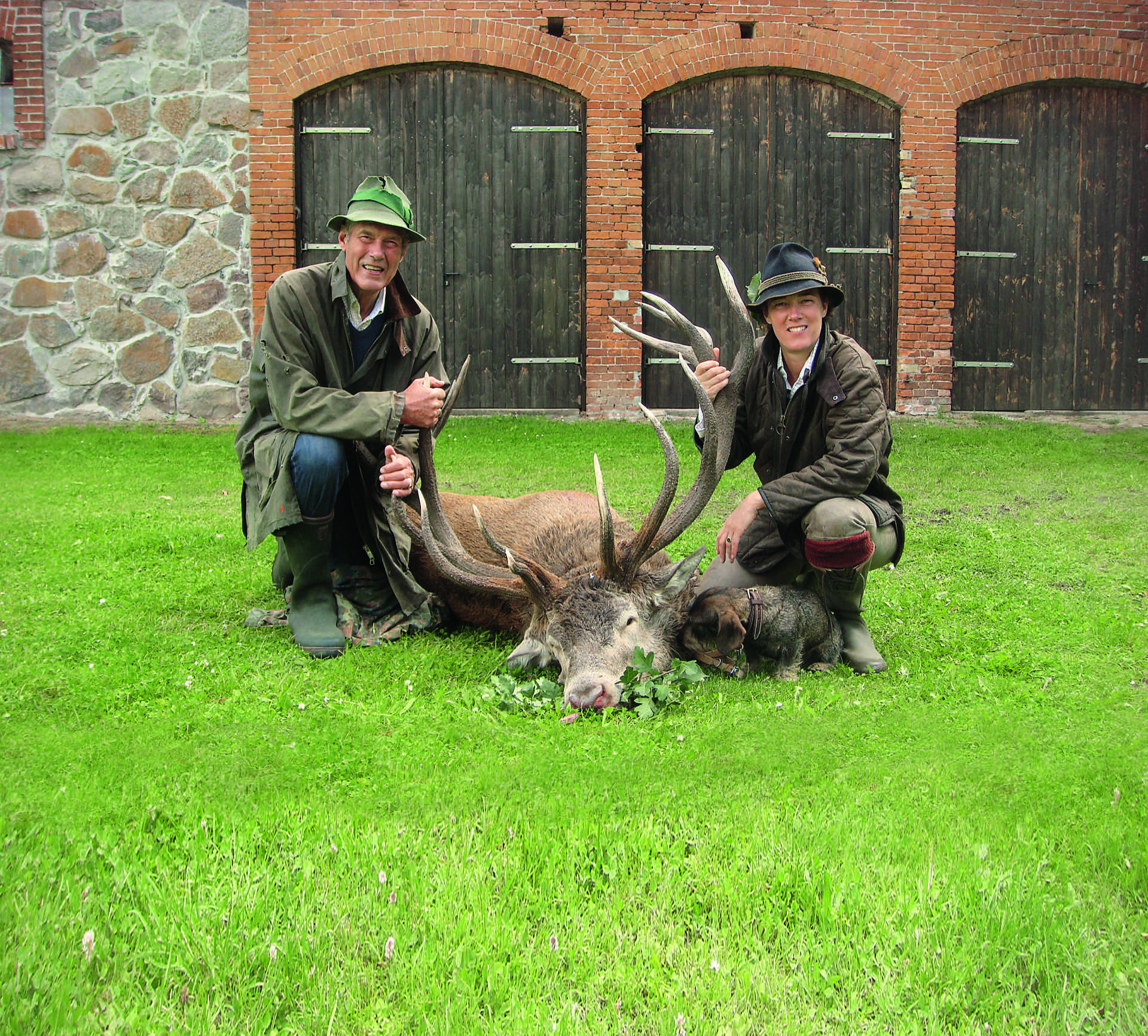 Since I cannot recover the deer on my own - later after it set off, the game scales show 250 kilograms - I called Mr Basener and his wife in the meantime and asked for help. I was therefore more than astonished when the two were joined by a three-man expert commission. When they arrive at my stag, the three gentlemen stand for minutes in silence and without any emotion. Somewhat unsettled by this behavior, I am relieved when Mr. R. breaks the silence and says a friendly hunter's salvation to a mature stag about twelve years old.

After a laborious recovery with persistent rain, which was only possible by sawing and removing trees that were lying across, we got home late at night. Word of the extraordinary event got around faster than expected, and so I was particularly pleased that my brother came here at midnight for the time of two beer lengths.

Lasting and shared memory of the deer of life

Since friends and acquaintances were so interested in my stag, we invited them to a stag party on the estate the following weekend. The hunters came from near and far to inspect the deer. Experts rated the exceptional trophy. Among them Messrs S. and Z. They not only confirmed the age of at least twelve years, but also classified the stag as gold, subject to a later assessment. One or the other said that at 40 I was too young for such a big trophy, but I hope that I can enjoy my stag for longer. A neighbor who had heard my shot from his residence couldn't help but make the remark that should stay in my memory: "What other idiot goes hunting in such bad weather?" 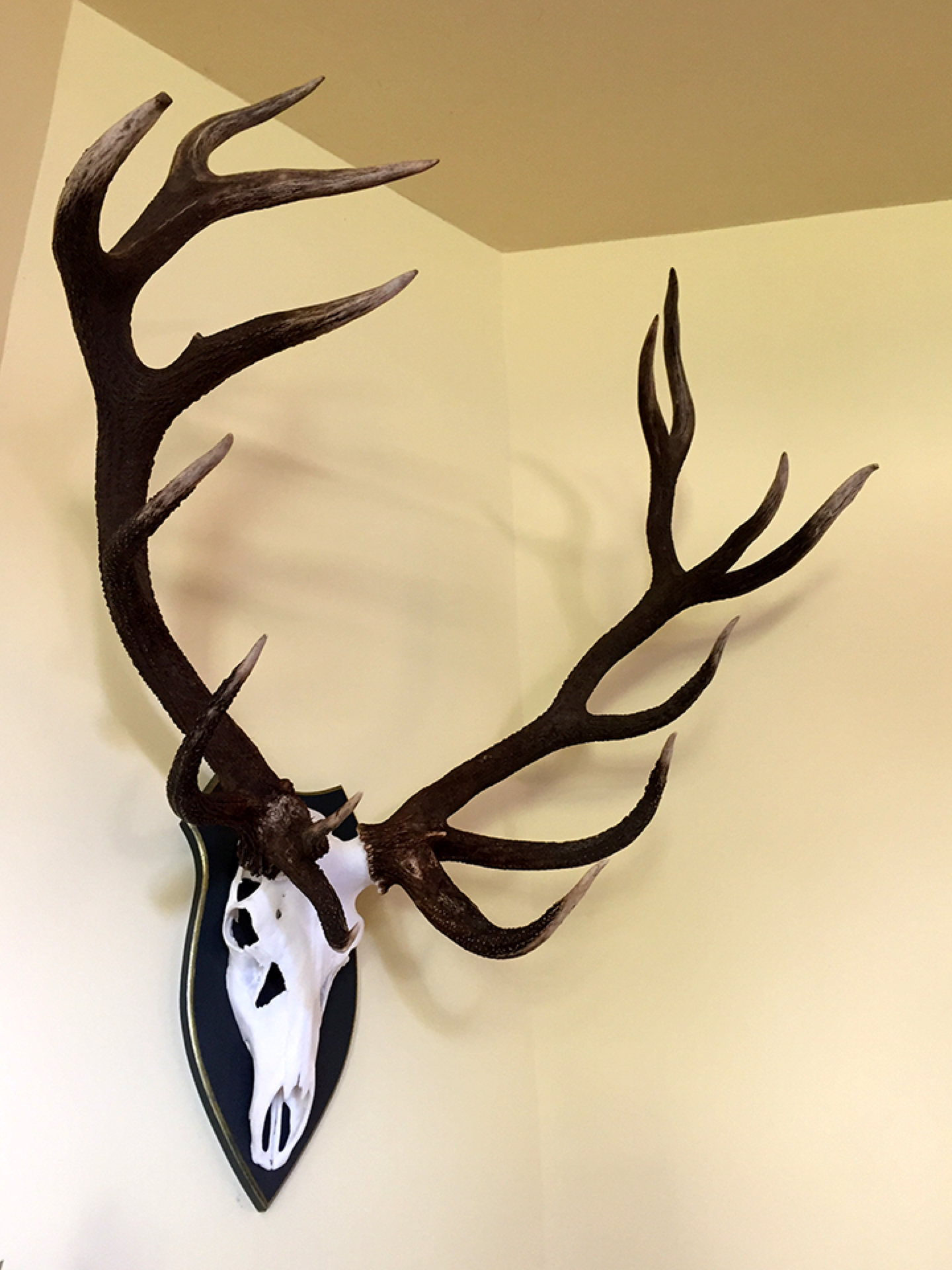 Evaluation of the deer of life