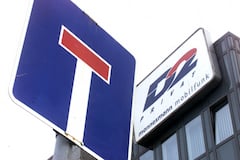 D2-Privat's path led to a dead end after a mega takeover battle in 2000.
Photo: Picture Alliance / dpa These days, 20 years ago, the last Mannesmann CEO, Dr. Klaus Esser some sheets of paper worth 190,000,000,000 euros (190 billion euros). The content: The British Vodafone plc was allowed to buy the Mannesmann Group including mobile communications, tubes and a few other parts. Vodafone has only kept the mobile network. The seamlessly welded pipes and other parts of the former technology group immediately found new owners.

In the beginning, D2 was private

D2-Privat's path led to a dead end after a mega takeover battle in 2000.
Photo: Picture Alliance / dpa Mannesmann Mobilfunk was launched in 1991/92 under the title "D2 Privat". The company was the first private mobile network operator in Germany to receive its own license. The target group of the new provider: Dedicated, interested, discerning customers from the private and business world who were looking for an alternative to the dusty and clumsy government agency "Post" at the time. This concept initially worked.

Mannesmann recognized the possibilities of mobile data radio early on. D2 offered Internet access (at that time still in circuit-switched (CSD) technology with 14 400 bps (HSCSD), the Telekom could "only" 9600 bps), D2 Privat provided its own e-mail address on request (username @ d2privat.de) on the mobile phone (the offer is theoretically available - well hidden - still today as [email protected]), all things that were completely new at the time and found enthusiastic customers.

D2 Privat was the market leader 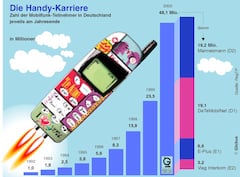 In 2000, Mannesmann (D2) was still the market leader ahead of Telekom (D1)
Graphics: Picture Alliance / dpa D2 Privat was the market leader at the time. After the takeover by Vodafone, the main competitor "D1" from DeTeMobil (later T-Mobile and today Telekom Deutschland) really stepped on the gas and took market leadership from its arch rival. The win of a connect network test in 2010 by Vodafone unleashed such dynamism at Telekom that Telekom has since been able to win all network tests by far.

After the takeover of Mannesmann AG by the British Vodafone group, many loyal customers missed personal support and advice. From then on, cost-oriented aspects predominantly applied. In the shops, some consultants tended to sell their customers "more" than they actually wanted or even understood.

The advantage of the new global corporation was favorable purchase prices, especially in "friendly" networks or networks belonging to the group. Many functions have been centralized and outsourced.

Because the later Vodafone boss Arun Sarin had Indian roots, Vodafone entered the complicated Indian market. Vodafone India was unsuccessful on its own and had to team up with a partner. A new competitor of a very rich (to be taken literally) Indian entrepreneur triggered a merciless price war, which is why Vodafone is no longer able to find a green branch in India. Ideas to leave the country were discussed louder and louder.

In the meantime, Vodafone has discontinued or sold some activities, be it in South Africa, Sweden or New Zealand. In Australia, Vodafone allied with Hutchison. The entanglements with the American major supplier Verizon, which had "inherited" the Mannesmann shares from Pacific Telesys, were laboriously separated, but Vodafone was able to stabilize its cash register.

The money for India and other global investments was missing in Germany for a long time. The (perceived) network quality declined or urgently needed expansions or retrofits only took place later. In the discussion about the current network supply, the mobile radio operators are in the crossfire. Vodafone Germany tries to counteract this point within the scope of its possibilities, but is clearly overshadowed by the related activities of Telekom.

In order to avoid expensive signal lines from Telekom to its own transmission towers, Mannesmann relied on microwave links at the beginning.
Photo: Picture Alliance / dpa If you look at Vodafone's network expansion in detail, you will discover large cities such as Wiesbaden (state capital of Hesse), where the Vodafone network has been proven to be worse than the often criticized Telefónica o2 network. This result fell to the unquestionable network test measurement company Umlaut, still known to many as "P3". Umlaut also found places where Vodafone is significantly better than the competition when it comes to indoor coverage.

His retrospective assessment: "The takeover by Vodafone was a great misfortune" - and further: "Our success story was broken off," answered the now 72-year-old former manager when asked by reporters. "The continuation of our strategy would have been better for the employees, customers and shareholders because there would have been more growth and profit," emphasized Esser. Mannesmann was a pioneer in mobile data communication at the time, the manager recalled. "It would have come much sooner with us," said Esser. Before the merger, the group had also been a pioneer in the integration of landline and mobile communications.

The Mannesmann supervisory board approved the sale to the British rival on February 4, 2000 after a long and ultimately unsuccessful defensive battle. With a purchase price of 190 billion euros, the business is still considered the most expensive takeover of all time. 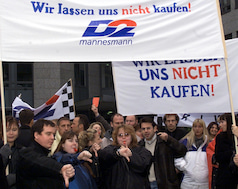 Most of the employees at Mannesmann Mobilfunk rejected the mega-deal and took to the streets.
Photo: Picture Alliance / dpa

The 16 million euro bonus that Esser received from the supervisory board in addition to the payment of his contract after the takeover also caused a stir. The premium led to a long process that led to the Federal Court of Justice. In the end, the proceedings against the involved supervisory board members and Esser against monetary requirements - sometimes in the millions - were discontinued.

Esser understands that most people at the time thought the premium was "too high". But the Mannesmann shareholders would have found the 16 million euros appropriate in view of a price increase of 150 billion euros. "Of course I would have preferred not to receive a bonus and continue doing my work for Mannesmann and the shareholders", Esser admitted in the meantime.

Would a reverse transaction be possible?

Mind games according to which Vodafone Germany could be happy again alone and without legacy in Germany or with new partners are unlikely, since essential network and process functions in the Vodafone Group have been centralized for a long time and only with great effort (and high costs) again could be taken apart.

The purchase of Vodafone Germany by another international mobile operator is also quite unlikely because the sheer size of the deal would immediately call the EU competition watchdogs on the scene. Vodafone Germany is one of the most profitable branches in the group, which is why a buyer would have to offer a fairly high price in order to be able to acquire this "pearl".

Vodafone on a shopping spree 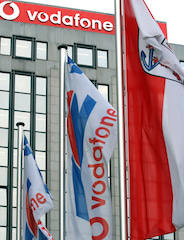 Twenty years ago the former Mannesmann Mobilfunk ("D2-Privat") became today's Vodafone (initially Vodafone D2).
Photo: Picture Alliance / dpa For this, Vodafone Germany was allowed to buy the cable TV providers Kabel Deutschland and Unitymedia with the consent of the headquarters in order to get its own fixed network closer to the customer in this way. This saves the high rental costs in order to be able to use the "last" mile from the Vodafone signal distributor to the customer's domestic junction box. A side effect are lines that Vodafone would like to use to reach its broadcasting stations. But this infrastructure is predominantly located in densely populated cities and not in the countryside, where annoying or even dangerous dead spots need to be filled. Here Vodafone would have to continue to lay expensive own lines or rent them from other providers (mostly Telekom).

It has also become quiet about the idea of ​​relocating the headquarters of the international Vodafone Group to Germany in the wake of Brexit. The Düsseldorf location was discussed.