Where are the roots of occupational health and safety?

It has long been known that health problems can occur at work: Hippocrates, the most famous doctor of antiquity and founder of scientific medicine, reported this around 400 BC. Chr. Pointed out that in the practice of certain crafts and arts damage to health occurs (and concluded from this that medical examinations should be asked about the occupation). In the late Middle Ages, "mountain addiction" (silicosis) and other mountain diseases were recognized.

Key feature method, manual work processes
The key indicator method was developed by the Federal Institute for Occupational Safety and Health (BAUA) and helps in assessing hazards by specifying key characteristics characteristic of physical hazards for assessment. You can find it on the BAUA website: www.baua.de, topics from A-Z, physical loads, risk assessment using the key indicator method.

What are the consequences of the industrial revolution for the history of occupational safety and health?

However, it was not until the industrial revolution that work-related health hazards became a generally important topic. On the one hand, the nature of work changed: Before the Industrial Revolution, most people worked in agriculture and at best earned a little extra with wage labor - which was usually home work; with the industrial revolution, wage labor in factories became a mass phenomenon. In the factories, damage to health therefore occurred more frequently and was clearly visible. On the other hand, the factory system in its new dimension was only possible through the improvement of the steam engine, with which the fossil fuel coal could be used:
With the prevailing pressures of up to 10 atmospheres, however, one had hardly any experience, so that steam boilers kept bursting. In addition, working conditions were very poor in the early days of industrialization and child labor was particularly widespread.

As early as 1828, Lieutenant General Heinrich Wilhelm von Horn reported to the Prussian king that the recruitment contingents in the industrial areas of the Rhineland could no longer be raised due to the damage caused by child labor (and at the same time the Minister of Education complained about the lack of school attendance by the children). 11 years later - after massive opposition from the industry - these lawsuits finally had consequences: In 1839, the Prussian regulation (“regulation on the employment of young workers”) was the first German occupational health and safety law.

Children under the age of 10 were banned from working in factories, mines and smelting works; Young people under 16 years of age who could not prove that they had attended school for at least three years were only allowed to work in factories if they had at least “read fluently” and “started writing”. The young people's working hours were limited to 10 hours, and night, Sunday and public holiday work was prohibited for them. Compliance with the regulations should be monitored by the local police and the school authorities. Bavaria and Baden issued similar regulations in 1840. When it became clear that the local police and school authorities could hardly prevail against the industrialists, a law on factory inspectors was passed in 1853, and the first three inspectors began work in 1854.

Monitoring and insurance of steam boilers

After the explosion of a steam boiler in the Mannheim brewery Mayerhof in January 1865, in which the boiler boy was killed and parts of the walls of the brewery collapsed, a "Society for the monitoring and insurance of steam boilers" was founded under pressure from the Baden Ministry of Commerce, with technicians twice controlled the steam boilers of the (initially 21) members in the year. After further accidents, what was initially a voluntary inspection soon became a statutory obligation to carry out annual inspections, and the other countries also founded steam boiler monitoring associations.

Finally, they also established standards for the construction of steam boilers and other technical systems. (Even before the turn of the century, after fatal electrical accidents, they were also responsible for the safety of power plants, and in 1936 they changed their name to “Technische Kontrollvereine” [TÜV].) of the German Reich in 1871 as Reichs-GewO, the duty of commercial entrepreneurs to protect their employees against dangers to life and health. At the same time, with the Reich Liability Act, the liability of the entrepreneur was expanded to include agents and supervisors - in practice, however, most industrial accidents remained without compensation, because the person concerned had to prove that the entrepreneur was at fault. In 1878 - against Bismarck's will - an obligatory factory inspection was introduced.

In the meantime the wage workers had reacted to the bad conditions in the factories: Workers' associations and the first unions were formed; In 1863, the “General German Workers 'Association” was the first mass workers' party in Saxony, which in 1875 merged with the “Social Democratic German Workers 'Party” (founded in Eisenach in 1869) to form the Socialist German Workers' Party. Chancellor Bismarck reacted in 1878 with a “law against the endangering efforts of social democracy” (socialist law); but also gave the workers sugar in order to weaken social democracy: in 1884, with the Accident Insurance Act, the employer's liability under civil law was replaced by compulsory membership in an accident insurance, the employers' liability insurance association. This was to ensure that industrial accidents are actually compensated. At the same time, however, the employers' liability insurance associations were given the right, as accident insurers (with the approval of the Reich Insurance Office), to issue accident prevention regulations and to have their own supervisory officers checked that they are being observed.

In the further historical development, with the establishment of the employers' liability insurance association, a second pillar emerged alongside state labor protection. This is why there is often talk of a “dual system of occupational health and safety”. In 1891 an amendment to the Reichsgewerbeordnung limited the working hours of women to 65 hours a week; the factory inspection has been converted into a more comprehensive industrial inspection. Up to the First World War, the occupational health and safety regulations were expanded and supplemented by regulations of the employers' liability insurance association on technical industrial safety;
In 1906, at the Bern International Conference on Occupational Safety and Health, a first international resolution was passed with the "Ban on night work by women", which was also signed by Germany.

History of occupational safety from 1918

After the First World War (Demobilmachungsverordnung of 1918) the daily working time was limited to 8 hours; Since 1925, occupational diseases and (with restrictions) commuting accidents have also been treated as accidents at work and thus an insured event for the accident insurance institutions. In 1933 the free trade unions were replaced by the "German Labor Front", which, as a unified association of employers and employees (under the motto "Beauty of Work"), was also supposed to take care of safety at work. During the Second World War, most of the occupational health and safety regulations were suspended; After the end of the war, the focus was initially on reconstruction. The rapid economic growth of this time was accompanied by high accident rates. Thus, the establishment of the welfare state went hand in hand with numerous new regulations, norms and rules for occupational safety.

In 1963, the new law on accident insurance regulates the rights and obligations of the employers' liability insurance association. You should prevent accidents at work or, in the event of an accident, support the injured (or the surviving dependents) through rehabilitation, professional support, health care, pensions, etc. Since then, companies with more than 20 employees have had to appoint safety officers. In 1968, with the Equipment Safety Act, responsibility for the safety of work equipment, machines and tools was transferred to the manufacturer or importer. These were only allowed to bring harmless devices into circulation. In 1971, the Ordinance on Working Materials regulated the placing on the market and handling of hazardous substances. This ordinance was replaced in 1986 by the Ordinance on Hazardous Substances.

In 1973, the Occupational Safety and Health Act (ASiG) established the obligation of employers to appoint specialists for occupational safety and company doctors who are supposed to support the employer in the implementation of his duties by providing expert advice. With the Workplace Ordinance (ArbStättV) of 1975, the requirements for the safety of workplaces were regulated by law.

With the entry into force of the European internal market on January 1st, 1993, the requirements for occupational health and safety law also changed. On the one hand, safety regulations had to be aligned in order to remove barriers to trade; on the other hand, Europe had committed itself to guaranteeing a high level of social security. The implementation was served by binding EU directives that had to be transposed into national law by the member states; The work safety framework directive (RL 89/391 / EEC), the machinery directive (89/392 / EEC) and the work equipment directive (89/655 / EEC) were particularly important.

The occupational health and safety framework directive was implemented in German law in 1996 with the Occupational Safety and Health Act (ArbSchG). With it, today's systematic approach to occupational safety was introduced. Determination of the risks to the safety and health of employees through a risk assessment, implementation of the necessary measures and assessment of their effectiveness.

The Machinery Directive was transferred into German law in 1993 as the 9th ordinance to the Equipment Safety Act (revised in 1992 in preparation for the European internal market) (Machinery Ordinance - 9th GSGV). This introduced the CE mark. The manufacturer thus assumes responsibility for ensuring that the machine complies with basic safety and health requirements. The European Work Equipment Directive (89/655 / EEC) was implemented in 1996 through changes to the steam boiler, pressure vessel and elevator regulations and in 1997 with the Work Equipment Ordinance. These were replaced in 2002 by the Industrial Safety Ordinance. This stipulated regulations for the use of work equipment and for the operation of systems requiring monitoring. For its part, it was revised in 2015.

Your training in the field of occupational safety

Would you like to train in the field of occupational safety in accordance with ISO 45001?
We have numerous training courses in our training program - for example in the areas of quality management, automotive, energy, the environment and many more! Check out our PDF catalog and choose the specialist area that suits you!

With many training courses you already have the choice between: Classroom training, e-learning or hybrid training! 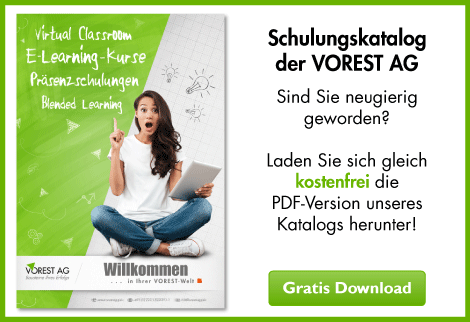