Back to my homepage

On this page: DVDs from Kinowelt (and others) - Striking scenes - Filmography

DVDs from Kinowelt (and others)

Kinowelt initially offered two 10-DVD boxes (DVDs also available individually) and six additional six individual DVDs. The third 10-DVD box containing these 6 DVDs as well as a documentation, a "Best of" and the Hardy films Zenobia [1939] and In the Last Second [1949] came out a few years late. In 2009, some of these films were reworked, reshuffled and distributed with additional extras in three boxes called "Dick & Doof - Collection". The DVDs of these new boxes now also appear individually. I have the Citadel film book by William K. Everson lying here and once made a filmography of all films, mainly to determine which scene actually comes from which film and on which DVD it can be found. I've added the distinctive scenes to make it easier to assign scenes and films. The description of the films we have made together is now complete, and from time to time I will hand in the solo films available to me (e.g. on the MK2 DVDs). There are still a few DVDs, mostly of poor quality, with early films by Ollie (and Billy West or Billy Ruge) that I have to reconsider buying.

The numbering of the DVDs comes from me. Of course, all information without prejudice! 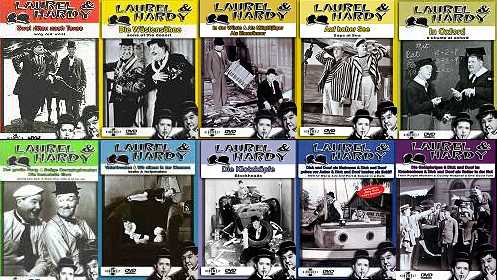 Disc 1: Two rode to Texas: Way Out West - Putting Pants on Philip
Disc 2: The Sons of the Desert: Sons Of The Desert - We Faw Down
Disc 3: In the desert: Beau Hunks - Me And My Pal - Sailors Beware - Sugar Daddies - Twice Two - Crazy Like A Fox
Disc 4: On the high seas: Saps at Sea - Sailors Beware - The Live Ghost
Disc 5: In Oxford: A Chump at Oxford - From Soup to Nuts
Disc 6: The Big Catch: Going Bye-Bye! - Them Thar Hills - Tit For Tat
Disc 7: Father Joy: Brats - Early to Bed - Helpmates
Disc 8: The Block Heads: Block-Heads - Unaccustomed As We Are
Disc 9: As Sailors: Any Old Port! - Men O'War - Towed In A Hole - Why Girls Love Sailors
Disc 10: The Greedy: County Hospital - Double Whoopee - One Good Turn - Their Purple Moment 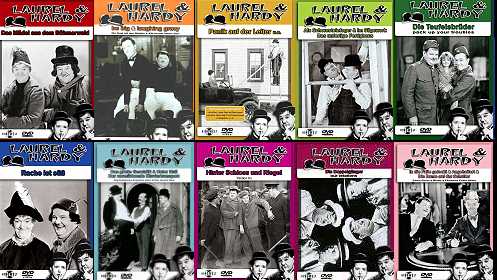 Other films Part 1: DVDs that are not available from Kinowelt. Green number: in my possession!

Other films Part 2: DVDs that are not available from Kinowelt. Green number: in my possession!

Other films Part 3: DVDs that are not available from Kinowelt. Green number: in my possession!

Other films Part 4: DVDs that are not available from Kinowelt. Green number: in my possession!

SDVD 31: Klamottenkiste (5DVDs). The films run with 'funny' comments and may have been cut or put together from several films. I tried to find out the original titles based on the cast and plot. Claudia Sassen's filmography was helpful. With Oliver Hardy (and Larry Semon): Larry in the fashion studio (The Gown Shop) - Larry the Millionaire Heir (Dunces and Dangers + Her Boy Friend) - Larry the Bankrupt Vulture (The Rent Collector)
SDVD 43: The Laurel or Hardy Collection (5DVDs, All regions according to Nero Info Tool): Solo films by Stan and Ollie and James Finlayson from catastrophic to OK quality with some films that are probably only represented here on DVD (marked with *, without Guarantee). The films have a watermark in the lower right corner and are trimmed tighter in my opinion. The films from MK2 or on American Slapstick are of a significantly better quality, that is to say, you only buy this cheap DVD box because of the * films (The quality of Chasing the Chaser is quite ok (I've now discovered that Chasing the Chaser included as Easter Egg on SDVD 18.2) at Wandering Papas and The Rogue rather poor and at Thundering Fleas bad).
SDVD 43.1: The Hobo - Just Rambling Along - The Rogue (*) - Frauds and Frenzies - Mixed Nuts - Married to order - White Wings
SDVD 43.2: The Bakery - Golf - The Sawmill - The Kid Speed ​​- Her Boy Friend - The Bell Hop
SDVD 43.3: Mud and Sand - Smithy - Pick and Shovel - The Soilers - West of Hot Dog - Kill or Cure
SDVD 43.4: Hop to it! - Stick around - Crazy Like A Fox - Long Fliv The King (see also Charley Chase DVD 1) - Should Sailors Marry? - Isn't life terrible?
SDVD 43.5: The Sleuth - Thundering Fleas (*) - Dr. Pyckle and Mr. Pride - Chasing The Chaser (Stan Laurel with James Finlayson) - Wandering Papas (*) (Stan Laurel with Clyde Cook and Ollie) - Crazy to Act - 45 Minutes from Hollywood
SDVD 64: Laurel and Hardy and Friends: Be Big - Our Gang Follies of 1938 - School's out (Our Gang) - Bear Shooters (Our Gang) - The Stolen Jools - Whispering Whoopee (Charley Chase)