Androgen production in women takes place both in the adrenal cortex (adrenal cortex) and in the ovary. The hormone production is subject to diurnal (NNR) and cycle-dependent (ovary) fluctuations that are in the range of 15 - 30 percent.

It is controlled by the release of luteinizing hormone (LH) and adrenocorticotrophic hormone (ACTH) from the pituitary gland. The term androgens refers to the group of sex hormones with 19 carbon atoms (C-19 steroids).

The C-19 steroids make up the largest proportion of circulating sex hormones. About 25 percent of the testosterone that can be determined in the serum comes directly from the ovary and the adrenal gland. The remaining 50 percent of serum testosterone comes from the ovarian (AD, DHEA) and adrenal (AD, DHEA, DHEAS) precursors. Like T, about half of AD is produced in the ovary and half in the adrenal region. For DHEA, the adrenal portion is around 65 percent and for DHEAS over 95 percent. The given distributions relate to the values ​​measurable in the serum.

The metabolism in tissue is much less well known, but possibly the more important process in relation to the effect in the end organ and is most strongly mediated by DHT. The biological effect of the androgens depends on the bioavailability and the respective androgenic potency of the individual steroids and on the binding and signal transmission by the testosterone receptor in the target tissue. Testosterone is bound to sex hormone binding globulin SHBG. This reduces the free testosterone concentration. Their unitless size is the free androgen index (FAI, 100X T / SHBG). Testosterone receptors can be found, for example, in the skin and on appendage organs, in the breast, in the endometrium, on bone tissue and in the central nervous system.

The polycystic ovarian syndrome (PCOS) is diagnosed according to the “Rotterdam criteria” (consensus conference ESHRE / ASRM 2003) if at least two of the following three deviations are present.

In PCOS, there are also often increased LH values ​​and an LH / FSH quotient> 2. The progestin deficiency occurring during anovulatory cycles can lead to endometrial hyperplasia with simultaneous tonic estrogen production.

The non-classical adreogenital syndrome (AGS), also known as late onset AGS, is based on a genetic enzyme defect in cortisol biosynthesis (mostly 21-hydroxylase is affected, less often 11β-hydroxylase or 3β-hydroxysteroid dehydrogenase). The decreased cortisol synthesis and an increase in the precursor 17 hydroxyprogesterone (17-OHP) result in increased androgen production.

In the case of virilization that develops very quickly and with greatly increased androgens (4 times above the norm), an androgen-producing tumor must be excluded.

Clinically, increased androgen levels in women manifest as acne and seborrhea, hirsutism and alopecia, in high concentrations with changes in the genitals (clitoral hypertrophy) and the voice. On the hair follicle of the scalp, androgens lead to a replacement of the pigmented terminal hair with vellus hair. In all other parts of the body, however, vellus hair is converted into terminal hair. In women, hirsutism is the term used to describe the appearance of terminal hair with a “male distribution pattern”, ie in places where vellus hair is normally to be found.

Different skin areas react differently to the increase in androgens: the skin is perimamillary, followed by the abdominal skin in the area of ​​the linea alba, face, chest and thighs. The classification of hirsutism according to Ferriman and Gallway takes into account the different localization and allows a follow-up. The first signs of increased androgen activity usually appear during puberty and often represent a relevant cosmetic problem for those affected. Ovarian failure also often occurs.

The diagnosis of hyperandrogenemia is based on the exact recording of the anamnesis, the clinical symptoms and the determination of the corresponding hormones in the plasma. Characteristic of hyperandrogenemia are the increase in DHEAS as a marker for androgen secretion by the adrenal cortex and testosterone as an ovarian and adrenal androgen, as well as the decreased levels of SHBG, the synthesis of which in the liver is inhibited by androgens.

In the ACTH test, the 17-OHP synthesis is forced and a strong increase can be used diagnostically. In the event of a pathological increase in 17-OHP, a molecular genetic examination should be carried out to check for the presence of late onset AGS, which is typically associated with a genetic defect in 21-hydroxylase.

In addition, ultrasound of the ovaries must be performed as imaging examinations and, in the case of very high androgen values ​​with suspected tumor and normal vaginal ultrasound, an MRI of the adrenal cavity. As in the case reported here, a selective catheter examination should be carried out if the above-mentioned imaging tests do not provide a clarification. A catheter is guided via the iliac vein and vena cava to the respective venous outflows of the adrenal glands and ovaries in order to selectively carry out hormone serum determinations in the outflow region of the respective organ.

Figure 1: Selective stepped catheter underlay: Catheter-supported contrast agent display of the venous outflow area of ​​the right ovary before a selective serum sample is taken to determine the hormone level. 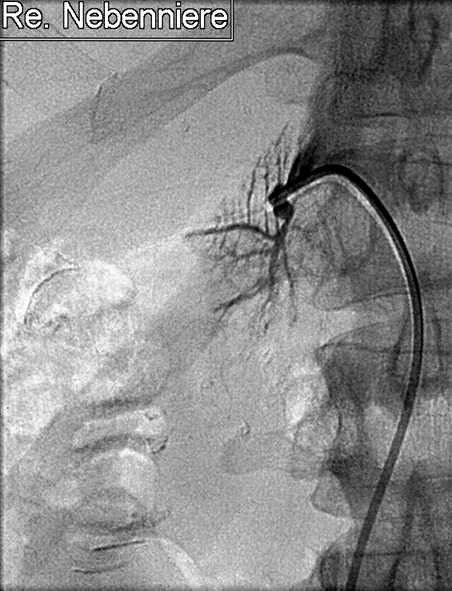 The basis of the treatment is the reduction of androgen production in the ovary and the adrenal cortex as well as the blocking of the androgen effect on the successor organ.

5-alpha reductase inhibitors (e.g. finasteride, spironolactone, progesterone), which are applied topically or systemically, prevent the conversion of testosterone to the much more androgenically effective dihydrotetosterone (DHT).

Ovarian stimulation therapy with clomifene citrate or follicle-stimulating hormone (FSH) is indicated for those wishing to have children and for hyperandrogenemia with ovarian dysfunction. Treatment with metformin is increasingly being used, especially if there is simultaneous insulin resistance.

Before starting drug therapy, if the androgen levels are very high, it is mandatory to rule out tumor-related endocrinopathy. An androgen-producing tumor in the ovary or in the adrenal cavity usually has to be surgically removed.