What is a bicycle battery

How is an e-bike battery structured?

Inside a battery, several rechargeable, individual battery cells are connected to form a pack. The battery cells are: lead gel, nickel-cadmium, nickel-metal hybrid and lithium ions. In this order, the energy density and thus the storage capacity of a cell also increases, which is why you only find Li-ion cells in modern e-bike batteries. Where previously over 10 kg of lead gel batteries were required for a capacity of 400 Wh, a 2.5 kg Li-ion battery is sufficient today. Modern batteries on current e-bikes have a capacity between 500 Wh and 750 Wh - some e-racing bikes can also get by with less.

What is a rechargeable cell?

Modern Li-ion batteries in e-bikes use cup cells. The name comes from its cylindrical shape. The type "18650" is the most common. This designation only provides information about the dimensions (18 mm diameter, 65 mm length) - but not about the quality of the cell. There are different qualities to choose from from one and the same battery manufacturer. The distinguishing feature is the purity of the electrolyte in the cells. It decides about the chemical processes inside the cell - and thus about its electrical properties. The battery cells in e-bike batteries differ enormously from the batteries that are built into cell phones. Therefore, conclusions from the battery of a cell phone to the battery of an e-bike are usually wrong. 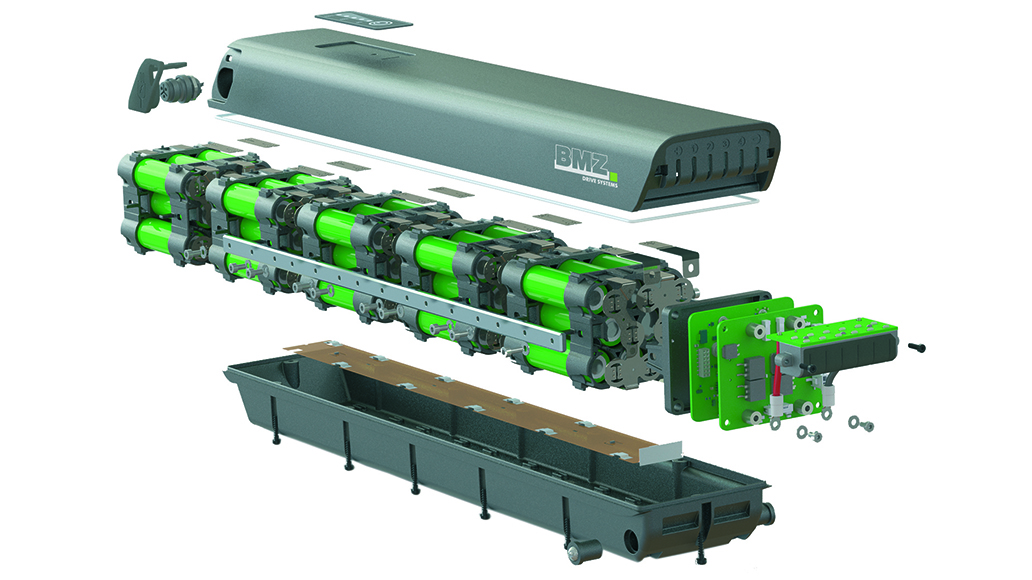 A battery in its individual parts.

And what does the BMS do?

A rechargeable battery is more than just a random string of batteries of the same design. A well-functioning battery is characterized by the conscientious selection of individual cells that behave in an electrically identical manner. This is the so-called assembly. In the case of high-quality batteries, this assembly takes place within very tight measurement tolerances. Because a battery is only as good as its weakest cell. An electronic battery management system (BMS) is therefore built into the housing of the battery, which monitors and controls every cell within the battery in order to compensate for minimal fluctuations in capacity. The BMS also protects against critical situations, such as deep discharge. Then it turns off the system. The BMS also detects excessive charging currents and interrupts the charging process.

All information about the app!

How does an e-bike battery work? 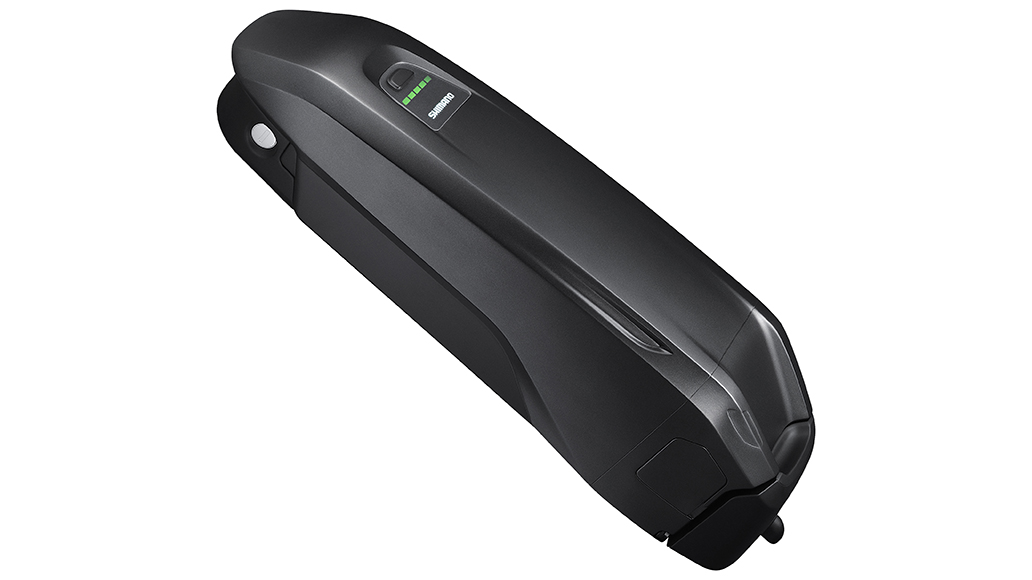 How do you use the battery correctly?

The well-known cycle of "always completely discharged" and "always fully charged" is obsolete with a modern Li-ion battery, as it has no memory effect, unlike older battery types. For example, smaller partial discharges and partial charges are better - instead of always running the battery completely empty and then filling it again completely. Because high charging currents stress the battery cells. And you don't always need full capacity on the daily commute to the office. If you keep your energy storage in the range of 20% to 80%, you can double your service life. Important: always use the original charger from the manufacturer!

Cold and heat are the enemies of the battery. Therefore, the cooled battery should first acclimatize to room temperature before hanging it on the charger. Contrary to popular belief, heat does more harm to a battery than cold. If the loss of capacity due to extreme cold is forgotten again when the battery comes to room temperature, temperatures above 40 ° C can cause the chemical processes in the cell to run uncontrolled. Then the cell can expand due to the formation of gas, burst and suddenly ignite. Such a battery fire is rare - but all the more dangerous. Therefore, you should not leave your e-bike in the blazing sun when you take a break.

Is the cold harmful to an e-bike battery?

As long as you are driving, a battery warms itself up. Due to its exothermic reaction inside, it is in the optimal temperature range and therefore in optimal efficiency even in cold outside temperatures. Branded batteries are less prone to loss of capacity in winter than batteries from discounter e-bikes, as DEKRA has proven, due to the higher quality electrolytes in the cells. In order to keep capacity losses due to the cold as low as possible, it is best to take the battery directly from the socket, hang it on the e-bike and set off straight away with the greatest possible support. In this way, the battery immediately has its optimal internal temperature, even at temperatures around freezing point. With branded batteries, neoprene covers have little influence on the internal temperature and therefore have no positive effect on the range. 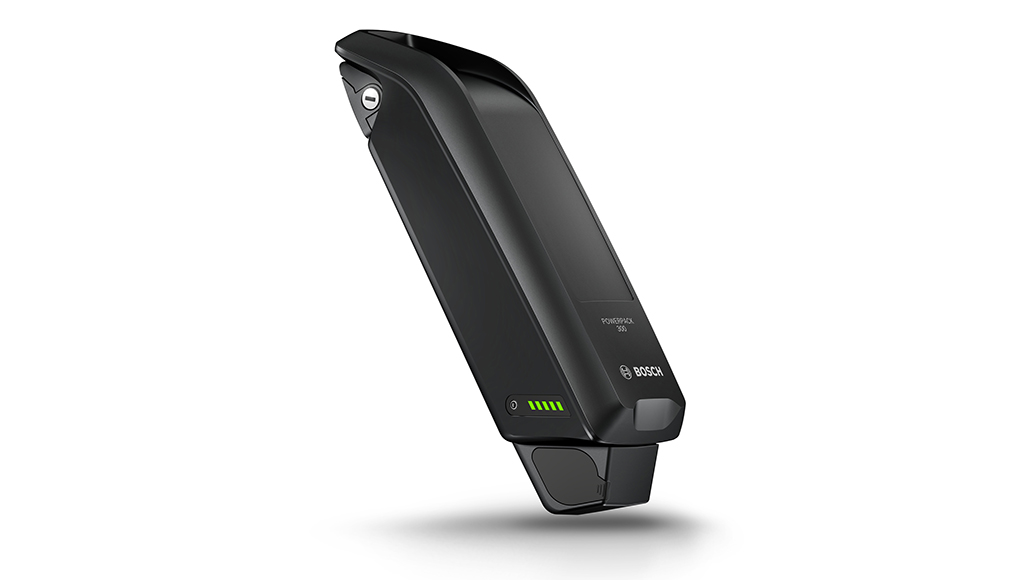 A battery from the market leader: Bosch has various compatible memory sizes on offer.

And how do you store the e-bike battery correctly?

A battery should always be stored dry and cool at approx. 15 ° C to 20 ° C. If it is not used for several weeks or months, it is good to keep it at around 30% to 60% (two to three loading bars out of five) of its capacity. A permanently higher charge stresses the battery - just like an empty battery can deeply discharge itself. In the case of a battery in daily use, the BMS effectively prevents deep discharge. With a stored empty battery, however, self-discharge of approx. 0.5% to 2% per month can cause deep discharge, which the BMS cannot prevent. A deeply discharged battery then usually refuses to charge. Many battery explosions can be traced back to the fact that a deeply discharged battery was still charged “by force”.

What happens to a dead battery?

A battery ages. After an average of 800 charging cycles, a battery has reached the end of its life. Then it only has about 70% of its capacity. Then you give the battery to the manufacturer, who feeds it to the "common battery return system". Every e-bike manufacturer pays a certain amount for each e-bike sold to the "GRS batteries" so that they can properly dispose of the batteries and take care of recycling. Valuable raw materials are thus fed back into a cycle and the environment is protected.

Or you can have a so-called “battery refreshing” carried out. During such a “refresh”, these battery cells are replaced by companies that specialize in it. You shouldn't do this yourself with a soldering iron, because battery cells have to be welded or soldered together with a short pulse. Otherwise too much heat will be introduced into the cells and they will be permanently damaged - or even a battery fire will be triggered.

What is the range with one battery charge?

The answer to the question of how far you can get on an e-bike with one battery charge is very complex. It depends on a lot more factors than just the battery capacity. Depending on which motor support you choose, or how much power you bring into the system yourself and with what cadence you pedal, the range can vary with one and the same rider on the same e-bike. And of course the rider's weight, as the route profile, the altitude meters and the number of stops and journeys have an influence on the distance that can be covered with a battery. The greatest influence, however, is the driving resistance, above all the rolling resistance. The "Range Assistant" from Bosch clearly shows the relationships.

Some drivers complain about a drastic loss of range in winter - and blame it on the battery. However, it is not so much the drop in performance of a battery, which is why the range decreases, but rather the sometimes drastic increase in driving resistance due to poor road conditions, additional clothing, more viscous lubrication in the entire drive train and again the human factor, which also means less power into the system when it is cold brings in. The motor compensates for all of this at the expense of range. 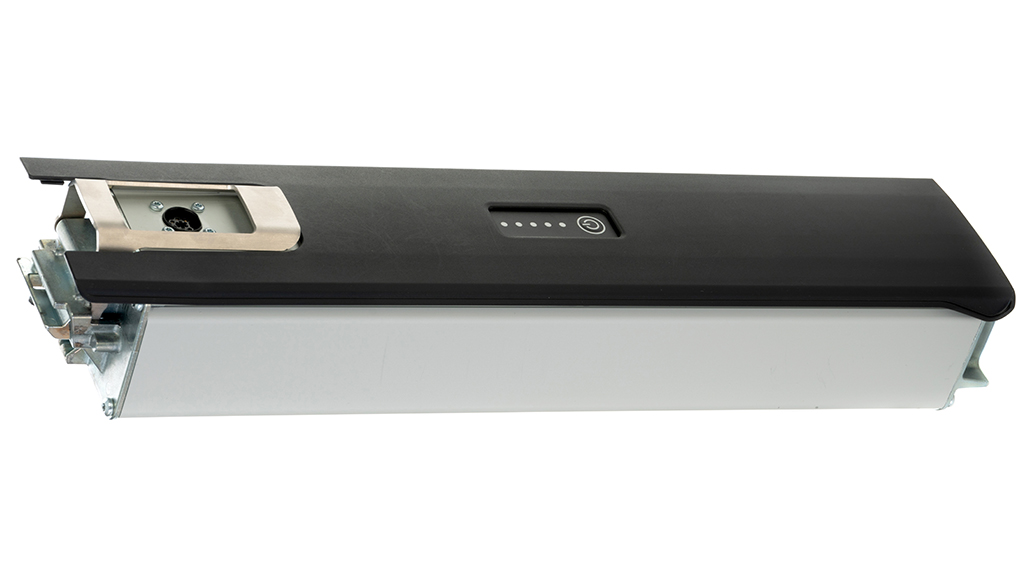 A battery pack that can be integrated into the down tube. Here from Simplon.

Which batteries are there?

The design of a battery has changed a lot in the last two years. If the frame batteries on the down tube or seat tube indicated that it was an e-bike from afar, nowadays you can be on an e-bike almost undetected. “System integration” is the keyword. Nowadays, the buyer of an e-bike can choose from four different battery positions: frame battery, semi-integrated battery, fully integrated battery and luggage rack battery. All designs have their advantages and disadvantages.

The frame battery is usually more compact in its design. It sits close to the bottom bracket on the down tube or on the seat tube. This enables a low center of gravity. And because of its compactness, the frame battery can usually be carried comfortably in a backpack or in a luggage bag.

The fully integrated battery has the advantage of being more inconspicuous in its appearance in the e-bike. The battery is protected inside the down tube. The shape of the down tube can be designed more freely. The disadvantage is the higher weight, as the opening in the down tube weakens the frame and you have to compensate for it with more material.

The luggage rack battery is the easiest way to accommodate a battery on the e-bike. The frame design is not influenced by the battery. Down tubes remain more filigree, with low step-throughs the step-through remains free. A major disadvantage, however, is the unfavorable weight distribution on the bike, which can even lead to problematic driving behavior for low-level climbers. 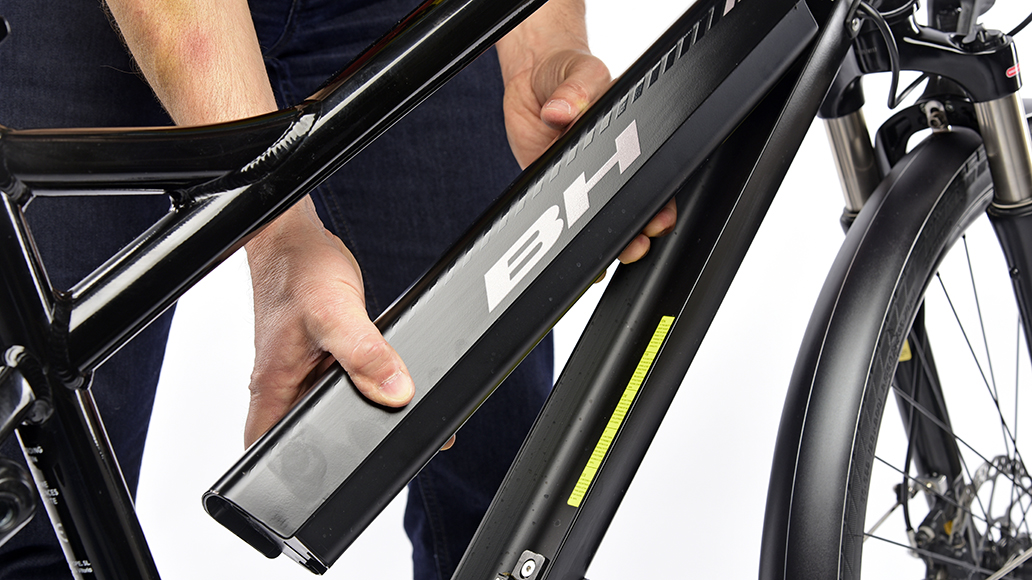 This is what it looks like in practice: Integrated battery in the down tube.

Is the bigger e-bike battery always the better?

The bigger battery is not always the better. The saying goes: There is no substitute for range - except for even more range. But not every bike category needs a high-capacity e-bike battery.

Since last year, e-racing bikes have been entering the market whose motor does not run permanently, as you can easily move over 25 km / h on a racing bike on your own. The engine only helps when accelerating and when driving uphill. And because the motor only works from time to time, 250Wh are completely sufficient. A mountain bike, on the other hand, never gets enough watt-hours. Even more vertical meters, even steeper ramps, even greater difficulties - all of this takes its toll. In the form of electricity. Therefore, it can be a little more with E-MTB. 500Wh, 630Wh or even 750Wh.

outlook into the future

The battery issue remains exciting. For two years now, significant numbers of a new type of Li-ion battery have been built, which will also find its way into eBikes from autumn 2019: the type "21700". (21 mm diameter, 70 mm length). This cell type is said to have been developed primarily for Tesla electric cars and is being used for the first time in the Rotwild R.X750, which will be presented at the end of June 2019. Due to the larger volume of these goblet cells, the performance can be significantly increased without any special development effort on the technology. The next increase in performance can then almost only be achieved through higher energy densities. However, this is not easy with the well-known Li-ion batteries. New connections such as the lithium-sulfur battery or the magnesium-ion battery are in demand. With these types of batteries, the energy could be increased fivefold with the same size and weight. But the behavior of these batteries is still problematic at the moment.

But not only the range will be an issue for the battery in the future. But also sustainability and recyclability. Given the strong growth in the market for e-bikes - yes, the overall market for electromobility in general - this will be one of the topics that is increasingly being considered.

How do I get the most out of my e-bike battery?
How to defy the cold on an e-bike