How do you criticize professionally

Conducting a critical discussion: tips on how to criticize successfully

Nobody likes to hear criticism. But sometimes it cannot be avoided. Criticism is sometimes unavoidable, especially at work. Nevertheless, it remains an unpleasant task. Quite a few executives find it difficult to give their employees negative feedback. For example, because employees react to it with incomprehension, defensiveness or violent emotions. Critical discussions offer enormous opportunities - if they are well prepared and conducted professionally. We'll show you how to successfully conduct a critical discussion ... 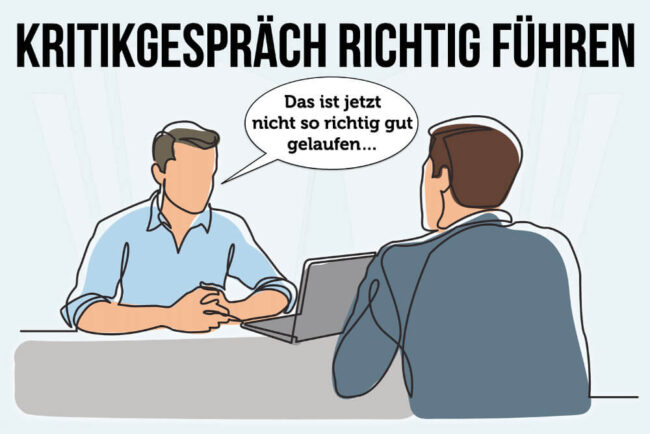 Critic talk: Why criticism is important

The goal is not, however, Merely denouncing misconduct or poor performance. Rather, it is about improving cooperation and processes in a factual and constructive way. The stipulation is an exchange at eye level. A professional discussion with criticism therefore has the character of appreciative help and support. It primarily serves to promote the employee and only secondly to correct it. As part of the critical discussion, employees should be given the opportunity to change their behavior and learn from previous mistakes and develop themselves further.

When should you have a critical discussion?

In general, superiors have what is known as the right to issue instructions (also known as the “right of direction”). Means: You can tell the employee - within the framework of the employment contract - how he has to do his job. This is all the more true when the work is inadequate. A critical discussion is useful on the following occasions:

To better prepare for the critical discussion, you can also download a free PDF guide here. The checklist contains important orientation questions for the interview.

How do critical discussions fail?

The core problem with the critical discussion: It is seldom conducted as constructively as described above. Instead, the employee appraisals resemble a so-called come-to-Jesus meeting - a loud scuffle or a moral sermon that feels like being “put down” (and often it is).

Such destructive criticism has several negative effects. Bad enough that the employee's mistake may already generate costs. If the boss conducts the critical discussion poorly, this causes additional damage (not only to the working atmosphere). It is not uncommon for costs to arise from demotivation, employees who quit or customers who migrate.

Discussing criticism: The course of the conversation in 7 phases

There are tasks that cannot be delegated. The critical talk is definitely one of them. Managers MUST always manage this personally. Out of respect for the employee. But also so as not to lose your own respect (because of cowardice). Classically, the critical discussion takes place in seven phases:

A critical discussion should take place without time pressure and never between the door and the hinge. Such one-to-one conversations need a fixed appointment, sufficient time and a pleasant atmosphere. Ideally, you will meet in a protected room, offset at the table (not across the street - that creates barriers) and start with some small talk on the relationship level. A good way to start is, for example: “Ms. Müller, thank you for accepting my invitation. Can I offer you something to drink? The reason for our conversation is your behavior in the last meeting that I would like to talk to you about ... "

After the greeting and small talk, the actual message of criticism should follow relatively quickly. Calm and matter-of-fact in tone, respectful and unambiguous in wording. Blanket criticism is taboo, as is stories from three years ago. This is unfair and provokes opposition. Even messages wrapped in cotton and softened have a counterproductive effect. Basically: Avoid generalizing accusations (“always”, “constantly”, “never”). You should also avoid the typical sandwich criticism. Formulate clear and precise I-messages: "I noticed that ..."; "I was annoyed how you ..."; "I do not agree with the behavior that ..."

After you have described your impression, you should give the employee the chance to describe their version. Give him enough time to think about it in the critical discussion to digest the criticism. By encouraging him to describe his point of view (“Can you understand that?”; “What were your motives?”), You are expressing appreciation - despite all the criticism. In addition, misunderstandings can be cleared up in this way. Even if justifications and excuses usually follow: first listen (actively) - without interrupting.

Research into the causes should not dominate the critical discussion. It is more important to proceed in a solution-oriented manner. Now that both points of view are known, you should examine and evaluate any arguments. Any contradictions must always remain comprehensible in order to achieve acceptance by the employee. It is important that it is clear why you evaluate the result or behavior negatively, what the consequences are and why a change is necessary. Constructive criticism also shows solutions. Ultimately, the aim of the critical discussion is to jointly (!) Find an insight and a concrete solution.

TIP: Do not try to submit “ready-made recipes”. Acceptance increases if you both develop a solution together. The goals worked out should also be achievable and realistic. If smaller steps are planned, this can lead to a sense of achievement. That is also motivating.

At the end of the critical discussion there is always an agreement on the future behavior of the employee. Anyone can make mistakes. Just not always the same. Therefore, in the critical discussion, you should also agree when and how success and progress will be measured or monitored. Or what consequences there might be otherwise. This not only underlines the seriousness of the situation, but also gives you - in the positive case - the chance to receive praise and recognition later.

A successful critical discussion should not only end with an appeal on the factual level. Make it clear that everything is still in order on the relationship level and that your relationship - apart from the criticisms - is untroubled. In this way, you relieve employees of fear and at the same time help the other person save face. It is crucial for further success that everyone leaves the conversation relaxed and that the solution is accepted by both of them with satisfaction.

Managers should follow up on every feedback discussion. This includes, for example, how it went: Did you stick to your timetable? Was it possible to clarify the points of criticism? How will the employee behave in the future? Also make notes about the possible progress. Because: after the conversation is before the next conversation.

That is why a critical discussion is worthwhile

If you heed the key points of the above tips and recommendations, you will succeed in a critical discussion in which employees feel valued and remain motivated. This will lead to ...

A professional and constructive critical discussion always worth it. Mutually. Because it leads to better results in the long term and to a respectful cooperation.