What is the importance of ARPANET

History of the internet

How it all started and how the internet developed

The Gabler Wirtschaftslexikon defines the Internet as a "global, heterogeneous computer network based on the TCP / IP network protocol". Various services such as e-mail, chat, file transfer, the World Wide Web (WWW) and, more recently in Germany, internet telephony are provided via the internet.

Today our everyday life is influenced in many ways by the Internet and is supported by various Internet services. Digitization is happening at a rapid pace, so that our lives are increasingly interwoven with the internet-based network. In fact, despite its widespread use and its current status, the Internet is a very recent invention. In the following we would like to summarize the history of the Internet briefly and simply in an explanatory manner.

The history of the internet can be roughly divided into three phases. The first phase, the early phase, began in the mid-1960s. The foundations of today's technology and applications of the Internet were laid here.

The origin of the internet

The hour of birth of the Internet is the Cold War, or more precisely the year 1957, when the Soviet Union sent its first satellite Sputnik 1 into space. The US Department of Defense feared that this would enable the Soviet Union to destroy the US communications system. This fear was the trigger for the planning of a computer-controlled communication system, which should continue to function even if a node fails. In addition, a faster exchange of knowledge and information was sought through such a network system. 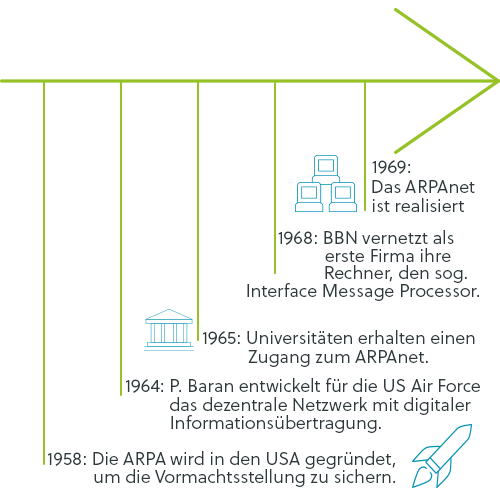 For this purpose, the ARPA (Advances Research Project Agency) was founded, which carried out first experiments with packet-switching networks and ultimately also developed the ARPAnet. ARPAnet is a decentralized computer network in which the computers are set up at different locations.

This network, which was primarily developed for military purposes, was also opened to some universities in the USA in 1965 and finally presented to the public in 1969. At that time, four computers were networked within the USA and the number of connected computers was growing very slowly.

The years 1970-1988: The basics of Internet communication

In the years between 1970 and 1988, the APRanet was expanded to include some important services and protocols. These new developments are fundamental to Internet technology to this day and are therefore important milestones in the history of the Internet. The distinctive and important developments are shown in the graphic below.

In the years that followed, the Internet continued to develop and then spread beyond the United States. The new network was particularly important in the university area, as it was used for research purposes and for the exchange of knowledge.

In the mid-1980s, Usenet was the most widespread application on the Internet. Usenet was developed in 1979 by Tom Truscott, Steve Bellovin and Jim Ellis and is a worldwide electronic network that represents an independent service of the Internet alongside the World Wide Web. The Usenet can be described as a discussion board with various discussion forums ("newsgroups"), which functions independently of the ARPA. The only requirement is a computer running the "UNIX" operating system and a telephone connection.

With the development of the network protocol TCP (and the TCP / IP protocol, which was later developed from it), the term Internet has established itself and replaced the name ARPAnet, which was based on the ARPAnet protocol. 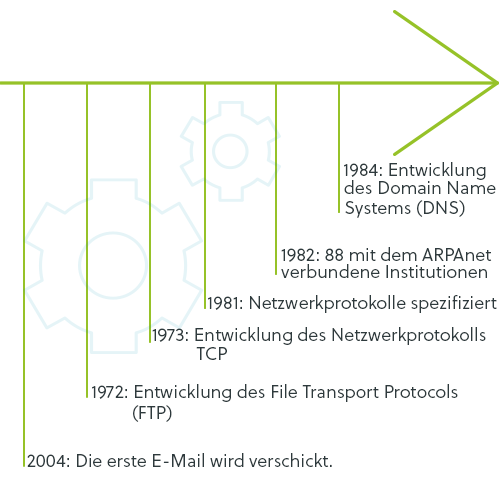 The British physicist and computer scientist Tim Berners-Lee was an important figure in the development of the Internet. In 1989 he published the first drafts of the markup language HTML (Hypertext Markup Language), on which all websites are based today. He also developed the HTTP protocol. HTTP allows you to navigate through links so that specific connections are made to information on other websites.

Berners-Lee also developed the URL, the first web browser and the first web server. These developments were the basis for the World Wide Web (WWW).

In 1990 the Internet became a medium suitable for the masses. This year the National Science Foundation decided to make the Internet usable not only for research purposes, but also for commercial purposes. From now on everyone could use the internet. With the advent of the World Wide Web, the ARPAnet was switched off at the same time. 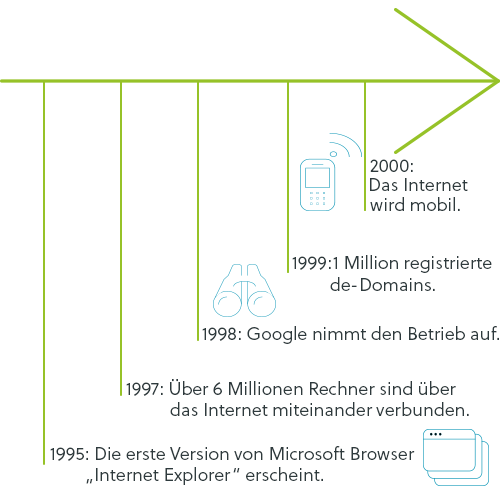 In the years 1995 to 2001 there were no fundamental developments that changed the Internet and its functioning, but the Internet network grew very rapidly. More and more computers were connected to one another and the number of domains registered in Germany rose rapidly. Some of today's most successful websites, such as Amazon and Wikipedia, start their Internet presence in this phase.

A large number of internet companies emerged, many of which became insolvent with the stock market crash of 2000/2001. With this event, the first high phase of the Internet ended.

After the stock market crash and the associated market shakeout, a second boom followed, known as Web 2.0. Web 2.0 does not mean any major technical innovations in the Internet, but a changed perception and use of the Internet.

Since 2003, the Internet has been more important than ever. The reasons for this are, in particular, new application options, services and websites that have emerged recently and that have a major impact on our lives today. 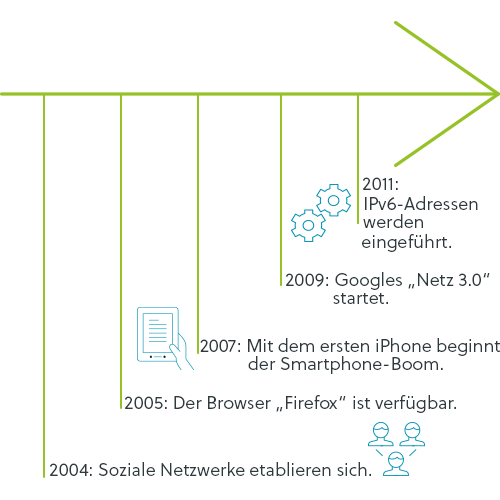 Frequently asked questions about the development of the Internet

How long has the internet existed in Germany?

The development of the Internet began in the United States. There it experienced many developments until it was finally accessible outside of the USA. Just like in the USA, the Internet in Germany was initially intended for university use. Ultimately, the commercialization of the Internet in Germany began with the privatization of the third-party funded projects EUnet in Dortmund (1992) and XLINK in Karlsruhe (1993). One of the first Internet providers who did not come from a university environment was the provider MAZ, which was founded in Hamburg in 1994.

What is the internet?

The Internet is understood to be a global network that consists of a large number of computer networks and serves to exchange data. It is therefore a technical infrastructure through which various communication and information services can be offered.

Which services does the internet include?

What exactly is the difference between the Internet and the WWW?

The difference between the Internet and the WWW is on a technical level. The Internet is a worldwide network of individual computer networks. The World Wide Web is an Internet service that enables the transmission of web pages. The WWW is the most widely used Internet service and is therefore often used synonymously for the term "Internet".

How does the WWW work?

The WWW is a collection of servers on which information is stored and which can be accessed using a software client, the so-called browser. When using the WWW one moves from website to website. This process is also known as surfing. Communication on the World Wide Web is based on HTTP, the Hypertext Transfer Protocol. Files in text, image, audio or video are stored on the HTTP server, which is generally known as a web server. The information is addressed with a URL and made readable via http or https.

HTML, the Hypertext Markup Language, is a description language with which text, images, videos and audio files can be displayed in a structured manner in the browser. HTML is the format in which web pages are written.

What is a browser and how does it work?

A browser is a client that sends a request to a server on the World Wide Web via HTTP. This server then sends back the requested data. The browser can then display this data on the screen. There are numerous browsers on the market, which are alternatively referred to as http clients.

What does HTTP mean?

What does HTTPS mean?

HTTPS stands for Hypertext Transfer Protocol Secure, translated it means something like secure hypertext transfer protocol. HTTPS is used to encrypt and authenticate communication between the web server and the browser. In general, it can be said that HTTPS ensures the security of a website.

What does url mean?

URL stands for Uniform Resource Locator. This is a standardized way of accessing content on web pages. Each URL is assigned a unique web page so that when the URL is entered, the browser can search for and display that particular page. Even if the terms “Internet address” or “Link” are used synonymously, they are not appropriate when referring to the actual URL.