Why is learning so easy for one person and so difficult for another? Why do some have to struggle with illnesses as children and others are perfectly healthy? Is that fair? This is already a topic in the Bible: If God is righteous, why is the world so unjust? This problem is not resolved in the Bible, but various explanations and interpretations are offered:

"Anyone who digs a pit for others will fall into it" one could perhaps say. But unfortunately, people other than the pit diggers often fall into the trap. And what about the pits that nobody dug? Sometimes everyone digs along in search of treasure and digs their own grave.

You get, what you deserve? Not always. In practice, however, it was (and is) judged as follows: If you are feeling bad, it is your own fault. Jesus rejected this personal connection: one shouldn't also assume that a blind person has gotten this on themselves. Unfortunately, Jesus does not explain in this way why things are often so unfair.

The question was repeatedly asked whether “everyone as they deserve” is really true. Because even pious people and good people got diseases. But because they expected God to be righteous, people never tire of reminding Him. If they were in need, God should prove himself righteous to them as He had promised. The others - who were unfaithful to him - he should judge.

Another interpretation goes like this: God is just, but some - the particularly good ones - he tests. Then it can appear as if God is acting unfairly. But in the end he gets the best out of people.

What do you make of it? When does this thinking work and when doesn't it?

That wealth is unjustly distributed was already a fact in Israel. But because God was righteous, he had to side with the disadvantaged - they are his favorites. Whoever wronged them angered God.

What do you think of this approach?

Obviously, law and justice often fall by the wayside. But if God is righteous, then this righteousness has to show somehow - and if it is only in the hereafter. The idea of ​​the “last judgment”, in which the good are rewarded and the bad are punished, has its origin here.

In a parable, Jesus tells of an employer who hires people to work in his vineyard at different times of the day. Some work eight, others five, some only one hour. In the end, everyone receives the full daily wage. That's God, says Jesus: Everyone gets what they need - no matter how much they have done for it. Is that fair

Re-enact the story (Matthew 20: 1–16) as a group. Remember that all workers depended on the money to buy food for themselves and their families. One part of the group plays the workers who were recruited in the morning and another part those who only joined in the evening. In each case, argue from the perspective of your group whether the vineyard owner acted fairly. 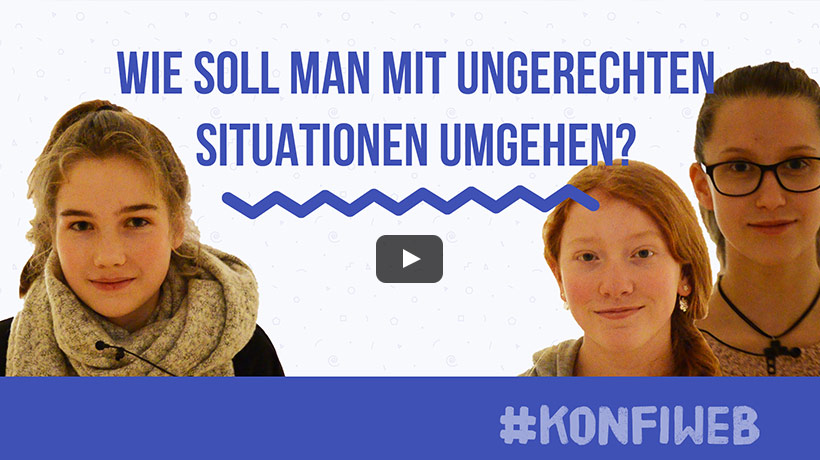 ... sometimes the word righteousness appears in the Bible.

100 years of women's suffrage in Germany

In November 2018, women's suffrage in Germany has been in place for 100 years. Unfortunately, there are still countries in the world where women are not allowed to vote.

konfiweb.de is an online magazine of the Evangelical Lutheran Church in Bavaria. Every second month there is a new edition which tells with stories, interviews and pictures about life, faith and confirmation. konfiweb.de is a participatory format.