What happens when antibiotics expire

Drug expired: what then?

Funny, the headache tablet with the active ingredient acetylsalicylic acid smells like vinegar. Can you still take it? No! If such a preparation gives off this sour odor, it has already broken down into its components: salicylic acid and acetic acid. Just get rid of it!

Why the expiration date matters

Every drug has an expiration date. It is important to note that in any case. Because only up to the point in time indicated on the packaging do the producers guarantee that the preparations work, are harmless and are of good pharmaceutical quality. Medicines generally have to meet these three criteria in order to be approved.

This also includes durability. Manufacturers use large-scale tests to determine how long a drug remains stable. They submit their results to the licensing authority. In Germany it is the Federal Institute for Drugs and Medical Devices or the European Medicines Agency EMA. The authority then sets the expiry date on the basis of the manufacturer's information.

Often the dose of the active ingredient decreases

If a preparation has passed this date, it may no longer work sufficiently. "The content of the active substance can decrease," says Professor Manfred Schubert-Zsilavecz. He heads the Central Laboratory of German Pharmacists and accompanies stability tests of drugs.

That doesn't sound too bad, one might think. But this breakdown is not without problems, for example in the case of antibiotic juices, which are only shaken to a suspension shortly before ingestion. "If the dose of active ingredient is not sufficient to achieve the minimum inhibitory concentration, it promotes resistance," says Schubert-Zsilavecz. Then particularly resistant bacteria can survive and become insensitive to the agent.

Beware, there may even be poisonous remains

With other preparations it happens that harmful substances are created when active ingredients decompose. In this case, an expired drug can even pose a health risk. For example, the substance hydrochlorothiazide forms the poison formaldehyde when it breaks down and comes into contact with water. Hydrochlorothiazide has a diuretic effect and is prescribed for high blood pressure.

So what do you have to pay attention to? Basically: Medicines that are in solid form and stored in blisters are less susceptible. Medicines in semi-solid form or in liquids are more sensitive. In addition to the expiration date, a usage period is usually added to them. You should also adhere to it and dispose of the agent afterwards.

The type of storage is also important

Many creams hold around once opened, only to a limited extent. The ingredients then react with oxygen. Other remedies are sensitive to light, for example certain calcium antagonists, which are also used for high blood pressure. You should only store these in the blister pack.

Still other medicines do not tolerate moisture, such as the pain pills with acetylsalicylic acid. The more often you are exposed to high humidity, the faster the stability disappears. For this reason, medicines should not be kept in the bathroom. A dry and cool room, where the sun does not shine directly into it, is more suitable - for example the bedroom.

In the case of active substances in liquids, such as eye drops, there is also the fact that - once opened - they are susceptible to pathogens. These pollute them. This can be particularly harmful to sensitive eyes. Tip: Make a note on the bottle when you first used the medication. This also applies to creams or ointments. 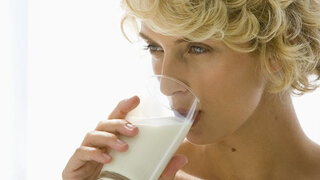 Taking the antibiotic with a glass of milk: is it possible? And what does grapefruit juice do? Typical examples ...