AI and Art: Shamans of the Digital Renaissance

AI and Art: Shamans of the Digital Renaissance

Following the 2018 ÖFIT conference - the symposium "(In-) fathomable - Artificial intelligence as a creator of order" - the Digital Public Services division of the Fraunhofer Institute FOKUS invited to an interdisciplinary salon evening with artistic impulses and performances. The event "Art and AI", curated by STATE Experience Science, took you into the world of AI and art.

Luba Elliott's lecture invited us to take a short journey into the history of AI development and application in the field of art and reflected fascination with and criticism of the new digital possibilities of representation.

Christian "Mio" Loclaire, creative director of WALTZ BINAIRE and choreographer, gave an artificial poetry lecture and, with the video Narciss, made a cinematic contribution to the discussion about the question of the self and the answer that a robot finds to it.
The following link takes you to the Narciss clip by WALTZ BINAIRE: https://vimeo.com/273373088

Dr. Diana Serbanescu and Regis Lemberthe, founders of REPLICA, spoke to Katharina Meyer about the potential of "sentimental machines" and, with the piece The Silver Farms by the REPLICA Institute, delivered a visually memorable final performance on the coexistence of different forms of intelligence and the interplay between algorithmic disruption and the new Spirituality of possible futures.
Here is a link to a compilation of the performance: https://vimeo.com/303917842

If you have any questions about the event, please contact

Luba Elliott, Art and AI curator
Luba Elliott is a curator, artist and researcher specializing in artificial intelligence in the creative industries. She is currently working to educate and engage the broader public about the latest developments in creative AI through monthly meetups, talks and tech demonstrations. This year, she is curating Impakt Festival in October, themed on post-truth and AI. As curator, she organized workshops and exhibitions on art and AI for The Photographers' Gallery, the Leverhulme Center for the Future of Intelligence and Google. Prior to that, she worked in start-ups, including the art collector database Larry's List. She obtained her undergraduate degree in Modern Languages ​​at the University of Cambridge and has a certificate in Design Thinking from the Hasso-Plattner-Institute D-school in Potsdam. 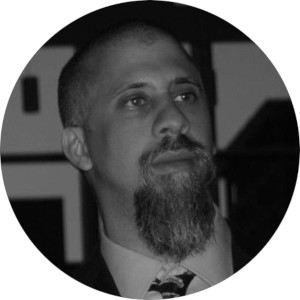 Prof. Robert M Geraci earned his PhD from the University of California at Santa Barbara and is Professor of Religious Studies at Manhattan College. He is the author of Apocalyptic AI: Visions of Heaven in Robotics, Artificial Intelligence, and Virtual Reality (Oxford 2010), Virtually Sacred: Myth and Meaning in World of Warcraft and Second Life (Oxford 2014), and Temples of Modernity: Nationalism, Hinduism, and Transhumanism in South Indian Science (Lexington 2018). His research has been supported by the U.S. National Science Foundation, the American Academy of Religion, and two separate Fulbright-Nehru research awards. He is an elected Fellow of the International Society for Science and Religion.
Regis Lemberthe, Co-Founder REPLICA
French situation designer Régis Lemberthe works at the border between speculation and production, simulating future rituals and artefacts through performing arts - with REPLICA Institute for Creative Anticipation - and design fiction - with NORMAL S. Always collaborations with like-minded professionals, his projects make use of imaginary situations to explore behaviors, gather insight and prototype an original vision of selected futures between utopia and dystopia. Other activities include teaching classes entitled 'Anticipation Design' and 'Design for Social Good' at BTK Berlin, as well as running workshops worldwide with the Future Fishing Training Program - a design fiction course dedicated to accompany organization public and private towards developing strategies informed by explorations of the future, which last session took place in Mexico City at the invitation of the city council. He is also active curating monthly arts events with a focus on sound experiments, and manages an artist atelier in Kreuzberg.
Christian "Mio" Loclair, media artist and choreographer, Artistic Director of Waltz Binaire
Christian "Mio" Loclair, creative director at Waltz Binaire, is a media artist and choreographer from Berlin, Germany. He explores the harmonic friction of human bodies, movement and nature colliding with digital aesthetics. Using cutting edge technology in interactive installations, audio-visual experiences, visual narratives and dance performances, he continuously illuminates the beauty and drama of human identity. He is publishing his work on mobile applications, digital projections and theater stages around the world for independent and commissioned projects.
Katharina Meyer, Curator, Science and Technology Historian, Researcher
Katharina Meyer is a technology and cultural historian, researcher in the field of software infrastructure and curator, among others at re: publica, the STATE Festival and in art spaces. She works at the interfaces between aesthetics and technology and publishes on network and media art, sociology of technology and digital culture. In 2016 Katharina co-founded the Polynocular Tech Lab project, which investigates and promotes transdisciplinary approaches in hardware, software or process development and was thus among other things a fellow at the Center for Advanced Internet Studies. The Prototype Fund, an initiative of the BMBF and the Open Knowledge Foundation, is currently responsible for communication, outreach and the further development of the program and is artistic co-lead in an EU-wide project on the use of technologies in museums.
Prof. Dr. Ina Schieferdecker, Director of the Fraunhofer Institute FOKUS, Founding Director of the Weizenbaum Institute
Since January 1, 2015, Prof. Ina Schieferdecker has been director of the Fraunhofer Institute FOKUS. At the same time, she holds a professorship at the Technical University of Berlin, where she heads the "Quality Engineering of Open Distributed Systems" department at the Institute for Telecommunication Systems. Ina Schieferdecker has been working in various positions at FOKUS since 1993 and has established two competence centers there. From 1997 to 2004 she was head of the competence center for testing, interoperability and performance (TIP) and until December 2013 head of the competence center for modeling and testing (MOTION, today System Quality Center - SQC). Ina Schieferdecker is the founding director of the German Internet Institute in Berlin. Among other things, she is President of the Working Group Software Quality & Training (ASQF) and a member of the German Academy of Engineering Sciences (acatech). She is also the spokesperson for the Smart City Network Berlin and a member of the German Advisory Council on Global Change (WBGU) as well as a member of the steering committee of the Science Platform Sustainability 2030.
Dr. Diana Serbanescu, Co-Founder REPLICA, Researcher at Weizenbaum Institute for the Networked Society
Romanian engineer, AI researcher and performance artist Diana Serbanescu explores the potential of sentimental machines: the new human, the measurability of emotion, or the continued validity of traditions in an era of artificial intelligence and digital colonization, when technologies permeate the collective unconscious and generate new aesthetics. Diana is team lead of the "Criticality of AI" research group at Weizenbaum Institute for the Networked Society, and Co-founder of REPLICA, a physical theater platform to invent and rehearse future realities.
REPLICAis a physical theater platform striving to invent and rehearse future realities through technologically enhanced performance spaces used as simulation environments. It invites performers, directors and scientists wishing to collaborate on reverse-engineering human emotions; on devising new interaction models between human and artificial intelligence; and on prototyping future tools, cultures and rituals.

Luba Elliott, Art and Artificial Intelligence (Lecture, Art Showcase) This talk from researcher and curator Luba Elliott will give an overview of how artists are using and thinking about AI. Over the past couple of years, there has been increasing interest in applying the latest advances in machine learning to creative projects in art, music, film, theater and beyond. From Google's DeepDream and style transfer to the world's first computer-generated musical playing in London's West End, more and more creative AI projects are moving beyond the world of research and academia into the public eye. Likewise, the art world has been critically interpreting the impact of these technologies, highlighting the problems of bias, uniformity and surveillance.
Christian "Mio" Loclair, Artificial Poetry (Lecture Performance) The poetic collision of human desire and cutting-edge technology illustrate our present age with digital harmony and voltaic friction. However, as digital design rush into a thrilling future of emerging technologies, the time span of our attention and the quality of our poetic experience decreases. In this talk Christian Mio Loclair, Art Director at Waltz Binaire, invites you on an interdisciplinary and visually stunning journey through code experiments, robot dancing, and artificial intelligence to answer the question "WHY?". Can Ai be a generator for sustainable questions and holistic discussions? Can we use emerging technologies as a mirror to human nature and how do we create accessible narrations for people to participate and understand? To enrich the perception of digital phenomena and to communicate meaningful ideas, is why we moonwalk on motherboards.
REPLICA Institute (Dr. Diana Serbanescu, Regis Lemberthe). The Silver Farms Through immersive dance-theater, REPLICA explores the coexistence between humanity and a plurality of ubiquitous intelligences overseeing life — artificial ontologies whose programming carry on the voice of long-forgotten ancestors. The snippets of future rituals that unveil throughout Silver Farms show an algorithmic, decadent pantheon unable to communicate, bound to interfere in absurd loops and glitches, generating a sense of confusion and chaos to in turn spark a sense of reinforced spirituality.
<?