What is the WhatsApp fingerprint unlock feature

WhatsApp for Android can now also be unlocked in the regular version with a fingerprint. Since the beginning of the year, users with an iPhone have been able to secure their conversations using the Touch ID fingerprint sensor. Biometric data protection has also been available in Android for some time - but only in the beta version of WhatsApp.

After updating the messenger, setting up the authentication is quick and easy, and various parameters can be configured in the settings.

Now also for Android: Unlock WhatsApp with your fingerprint 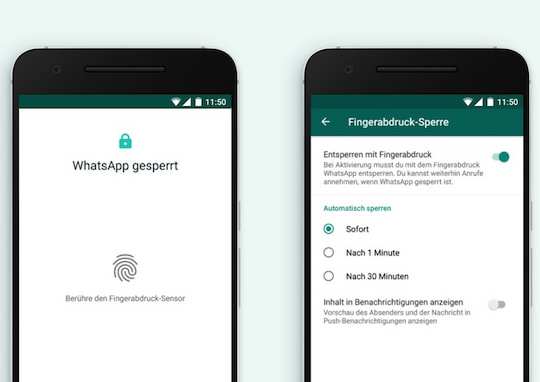 Finally for everyone: WhatsApp fingerprint lock
WhatsApp Inc. The introduction of the popular messenger's new biometric locking has been a tedious process on the Android platform. We reported back in January that the feature was active in a beta version of WhatsApp. After that, the function was often redesigned and taken out of use.

In August, the feature finally found its way into the WhatsApp beta 2.19.221. Around two and a half months later, WhatsApp Inc. is now announcing that unlocking via the fingerprint sensor is available to all users with an Android smartphone. However, the function is hidden in the menu somewhat nested. Users have to navigate to Settings / Account / Privacy / Fingerprint / Lock in WhatsApp. 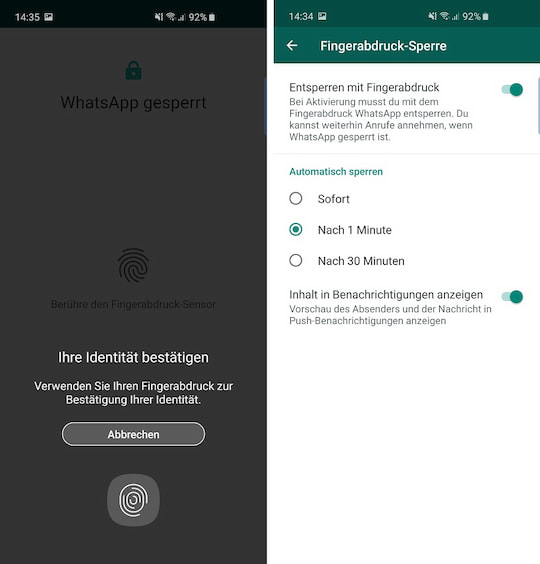 Works smoothly: WhatsApp fingerprint lock
WhatsApp Inc. The application advises that once set up, the chats cannot be accessed without successful authentication. However, WhatsApp voice and video calls can also be accepted when the phone is locked. The time until the messenger is automatically blocked can be set in the steps “Immediately”, “After 1 minute” and “After 30 minutes”.

You can also determine whether a preview of incoming messages is displayed in the Android notification line. The unlocking itself is done quickly and without detection problems. However, multiple fingerprints cannot be stored. There is also no option to block certain chats via fingerprint.

It remains to be seen whether unlocking via 3D face recognition will follow next. There are currently not too many compatible models in the Android warehouse, such as the Huawei Mate 30.

WhatsApp messages are encrypted. To make this happen, every chat has a security number. This can also be confirmed manually. You can read what this brings in a guidebook.