Ajanta, the Buddhist caves near Aurangabad

Today the time has come, I will visit the Ajanta Caves. The highlight of the trip and the main reason that brought me to Auragabad.
As yesterday, Shaikh is already waiting with his car in front of the hotel and we start the journey to Ajanta, about 100 km away. “Do you have drinking water with you?” Shaikh reminds me. Because, as he already explained to me yesterday, there are no water bottles to buy in Ajanta. There are drinking water points, but this is local, open water. “Foreigners don't drink it, you get sick from it,” he concludes, confirming once again. This is of course possible through foreign germs and I don't want to take any risks. 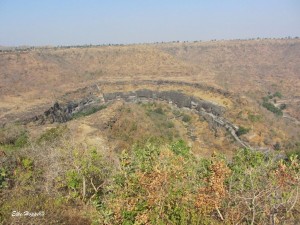 the Buddhist caves of Ajanta near Aurangabad

The two-hour drive goes by quickly and we have reached the parking lot above the Buddhist caves. Unlike Ellora, these caves were completely deserted for over 1000 years. They were discovered in 1819 by the British Madras Army. The soldiers were hunting tigers and one of the officers watched a tiger disappear into the bushes. In search of his prey, he discovered one of the then orphaned cave temples. The other caves were gradually uncovered and the Ajanta caves have been a World Heritage Site since 1983.
We reach our destination and Shaikh is absolutely right, the view is fantastic. From the parking lot up here I can see the entire U-shaped valley and the cave entrances. And not only that, also the crowds that are dropped off by the buses at the main entrance. Shaikh advised me very well to take the footpath, even if it is a bit more strenuous. How long will i go there? “Down about half an hour” Shaikh explains to me. And high? Then he says nothing and just shrugs his shoulders.
The valley is formed by the Waghora River, which flows through the valley during the rainy season. Now it has dried up and I have to imagine the waterfall that Shaikh shows me in my imagination.
“Mam, you need guide?” I am addressed by an elderly gentleman. A leader? Through all of the caves? “No, no!” I get an explanation. "Only from here to the caves, down the mountain and later up again." I'm supposed to get one Guide take to go down the walkway? "Yes, Mam! I'll also get the admission ticket. "
Shaikh has listened to the conversation and interferes: "The footpath is very lonely, it is seldom used and you never know who you will meet." So do not interfere Guide but a Bodyguard? “I've known the man for many years, you can trust him!” Is Shaikh's evasive answer to my question. 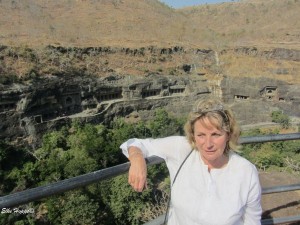 the footpath to the Ajanta Caves

The path is actually very lonely, including the parking lot. The path leading down makes a deserted impression and is difficult to see. Probably a male companion is not a bad idea and the man has to live too. The equivalent of three euros doesn't make me poorer and I'm on the safe side.
I walk down the mountain with my companion. On the way he tells me about the discovery of the caves and gives me advice which cave I should definitely visit. Half an hour later we are at the bridge that leads us to the other side of the river to the caves. "You can stay here, I'll get you your ticket." Where are they sold? He points to a small house about 500 meters away, in front of which there is a long line of people. Oh Lord! He has already earned his money with it, it will certainly take forever until he is back here. But just 20 minutes later he shows up again with my card. "You don't have to go back to the main entrance, you can take this side door with your ticket." We agree that he will pick me up right here at this point, if he is not there, I should just wait a moment.

In my travel guide it says that caves 1 and 2 are among the most beautiful that the art form of wall painting has produced. The two caves were created between 300 and 650 AD and the inner walls are painted with mineral paints. The pictures depict scenes from the life of Buddha.
In both caves the rush of visitors is so great that a security guard stands at the door and only lets in as many visitors as they leave the cave. I queue in line and wait for it to move forward. I've already taken off my shoes and hope to find them in the crowd afterwards. 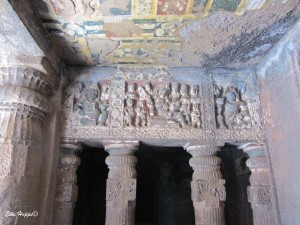 Now it's my turn, I can enter the cave with the current momentum of those waiting.
At first I see almost nothing, it is very dark. But a moment later my eyes have got used to the light and I can see the pictures on the walls. It is difficult to get a good view because despite the controlled admission it is just jam-packed here. The wall paintings are only inadequately lit, which makes viewing even more difficult. Nevertheless it can be seen that the trompe-lóeil painting was known and mastered at that time. 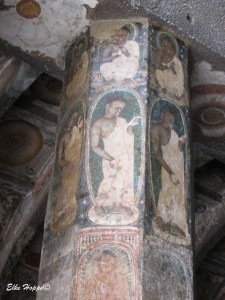 There is also a queue in front of cave number 2 and admission follows the same principle. Here, however, the lighting is a bit better and the jostling for the pictures is less. Or have I got used to it?
There are a total of 29 large caves in Ajanta, which are on average 30 meters deep. The construction time for a cave is said to have been around 30 years per cave. The valley was inhabited by Buddhists from the 2nd century to the 5th century and it was during this time that the caves were built. At the end of the 5th century, a wave of hostility against Buddhism spread throughout India and reached this valley as well. The Buddhists living here left their homeland and the caves were forgotten. 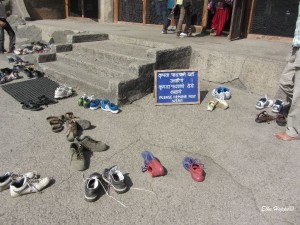 I stroll slowly from cave to cave. The big rush was only in caves 1 and 2, the highlights of this facility. But otherwise I can visit all the rooms in peace. Up and down stairs, shoes on and shoes off. Why did I take the shoes with Velcro instead of the slippers? The best thing to do is leave it out and walk the few steps to the next cave barefoot. Ouch!! The ground is hot, the midday sun burns on the stones and heats them up. Not just the stones, the heat builds up in the valley. I'm already drinking my last sip of water, but I haven't seen half of the complex yet. 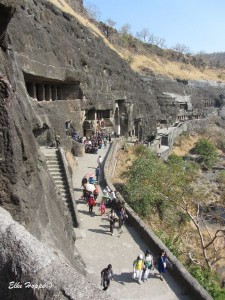 Not to mention the walk up to the parking lot. It goes on, now there is a cave where I can leave my shoes on. Bend down a little less, but my thirst keeps getting bigger. What should I do? Will the normal water really make me as sick as Shaikh prophesied? Why is there no booth with water or other beverages here in the otherwise enterprising India?
Thirst prevails over all concerns. In addition, the caves are so remote, that is definitely spring water from the surrounding mountains! I fill up my empty bottle and drink the water, as all Indian visitors do. 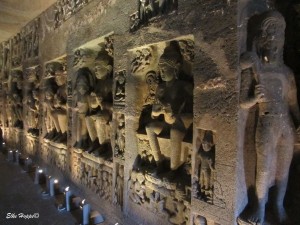 The lack of bottled drinks is probably due to the fact that foreign mass tourism has not yet penetrated the seclusion of Ajanta. The higher admission prices for foreigners are also available here, but I have not yet seen a second “Westerner” in Ajanta.
The caves are all impressive and I slowly walk from one to the other. As one of the last caves I visit the reclining Buddha, which reminds me a little of Thailand.
It is now 16º and my water bottle has been refilled for the third time. But it's still hot, I guess it's over 30ºC in this valley.
Time to make my way back, who knows how long it will take me to walk this steep path up to the parking lot. But first let's see if and how my security companion can find me. At the agreed place I sit in the shade of a tree and wait. And indeed, less than five minutes later my guide shows up to climb the mountain with me. Where was he all this time? "A little way up the mountain" he explains to me, "so that I can see you when you leave the caves." 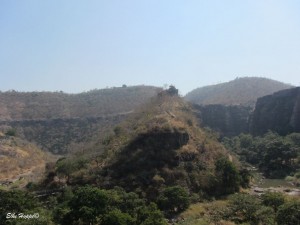 the pavilion on top of the mountain

Slowly but steadily we walk up the steep path. “A little more, then we come to a pavilion and you can take a rest,” he encourages me on the way. A good idea, because the air is buzzing with heat. Where is this pavilion? We have finally reached the intermediate stage and I sat down in the shade with my last sip of water. A little wind is blowing up here, the first breath of air since we left the valley with the caves. Here I have covered about half the distance. Although it is not that far, the route is long due to the high temperature. Apart from the hours that I have already walked up and down the stairs at the caves.
While I am trying to squeeze the last drop out of my water bottle, two men appear. They offer wood-carved figures and candle holders, as well as elephants made of soapstone. Where do they come from? Far and wide apart from me and my guide there is no one to be seen. Who were they waiting for? It can't be worth selling souvenirs here! They are very friendly and only praise their goods, but I'm still happy to have one "Guide-Bodyguard" to have by my side. Of course, I assume that they didn't get the tip from him that a foreign tourist is finally hiking up the mountain today. Or was there whispering propaganda somewhere: "It looks like she doesn't have a wood-carved candle holder yet!" No, I don't really think so!
But now on! To the second half of the way. It's easier because at this time of day it is already in the shade. So it goes quite quickly and I am back in the parking lot, where I say goodbye to my protector.
“Did you like the caves?” Shaikh asks when I get into his car. Yes it was great! A really worthwhile and recommendable destination, even if it is a little off the usual tourist route. The recommendation to take the footpath was also good. Especially when I look over and see the crowd at the main exit of the caves.
When we reach the hotel it is already dark. It was an exhausting, but very nice day. Tomorrow I will go to my next stage of the journey, the round trip takes me to Poone.
Shaikh helped me get a bus ticket yesterday because all trains are fully booked. "Your bus leaves at 2pm, so I can show you the sights in Aurangabad tomorrow morning and then take you to the bus stop." That is a good and fair suggestion that I am happy to accept and so we will meet for tomorrow at 9am.
Because Aurangabad of course also has its sights that have so far been neglected. Would you like to experience this trip yourself?Click here