We should love college

10 insights that we «Community» should all love for

For the Netflix launch of the sitcom “Community”, our editor Antje Wessels - arguably the greatest “Community” fan of all time - dares to take a very personal look back at the series, which, by the way, may contain small spoilers.

1. Do what makes you happy!

Super sportsman Troy was a crush in his high school and a gifted football player with an athletic scholarship, but he let it expire by faking an injury. Its real purpose seems to have been found at Greendale College: The air conditioning faculty (!), Which is also located in the building, recognizes Troy's much illustrated, actually existing talent as a plumber and air conditioning repairer and does everything possible to poach him. When she actually succeeds, he shows himself to be underchallenged even by the most complex tasks - Troy was apparently actually born to be a plumber, has a natural gift and could start a great career. But one simple fact makes him question this step: It doesn't make him happy! Troy says “No!” To a life full of admiration and popularity (yes, in the “community” cosmos you can actually become famous in this way!), Because inner satisfaction is more important to him. Quite inspiring!

2. Uniqueness stands out for flawlessness! 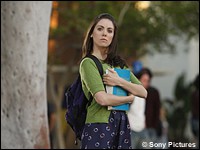 It's one of many running gags: the constant emphasis on how fucked up Greendale Community College actually is. Here there are courses such as “holding your breath for advanced learners”, the evening college is the invention of a lazy lecturer, even a dog has already graduated here - not to mention the construction defects and inadequate equipment. At first, this lack of perfection affects the well-being of students and faculty until everything is done to whip the college up for a regulatory review. The result: Greendale is now worth something - and ready to be sold. A world is collapsing for the study group, not to mention the director of studies, who adored his disastrous college. Because what good is perfection if you have nothing at all from it - except to know that it exists.

Abed already knew: “Television makes sense, has structure, logic and rules. And nice leaders. We have that in life! ". The “community” favorite, suffering from Asperger's Syndrome, understands the world with the help of film and series schemes, uses pop culture references to understand the adventure of life. Of course, not every random scenario can be compared with a fictional event, but it can help to apply common dramaturgies to the far more complex functioning reality in order to rob it of that complexity for a moment and to expose the often all-too-simple problem. In essence, the difficulties repeat themselves very well in earthly existence, they only appear in changing forms.

4. There is no master plan!

At first glance, of course, the composition of the study group reflects the ethnic and social diversity that is the handle of the Greendale Community College. At the same time, the community of old, young, married, divorced, bachelors, machos, dropouts, mothers reflects one thing above all: the fact that no life plan can be described as “the right one” across the board. Everyone in this illustrious group of friends has problems big and small in their lives, regardless of whether they are popular, an outsider, a charm or a loner. And the best thing about it: The community doesn't really care. Everyone gets ahead somehow via detours. Which goal he is pursuing is of secondary importance.

5. There is a difference between doing bad and being bad! 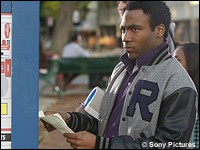 There is no antagonist in “Community”. And there is a reason for that: the creators of the series very skillfully differentiate in their format whether a character is evil or whether they are "just" doing something evil. In most cases they come to the conclusion that no one can be assigned to one side only. The main characters all afford missteps over the course of the six seasons (some of which even have quite significant effects on the group structure), but can compensate for them elsewhere by acting to the contrary. And even if some people take longer to break bad habits, people around them will inspire them to do better. Nobody has to or should pretend to make others happy. But character change in the form of maturation is right and important in order to contribute to a harmonious coexistence in the long term. Even Pierce Hawthorne understood that at some point.


6. You don't have to know everything to be happy!

At a crucial point in the second season, the group of friends becomes a community that is always responsible for themselves and each other. In the episode “The Almost Naked Truth”, nerd Annie misses a pen, which everyone in the group is then searched for. The scene ends with everyone standing naked across from each other, everyone declares not to have him and he has still not shown up until the very end. It is in the room how the group members can ever trust each other again if one of them is obviously a mean pen thief. For Jeff, one thing is certain: trust has nothing to do with knowledge, but with faith. Together with Troy, he invents the story of a ghost who has hacked a pen. No matter how implausible this story is, it is still more realistic than assuming that someone in the group might have stolen the pen. In the end, what actually happened no longer matters. (Note: a monkey in the air ducts had stolen the pen - also not much crazier than the idea with the ghost).

7. Holding on to the past is okay! 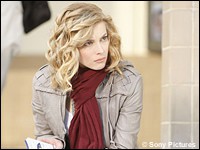 For four years (= four seasons) the Greendale Seven formed a tight-knit community. In the fifth, characters gradually began to say goodbye, some of which were replaced by others. Because the latter often causes displeasure among fans in many formats, the scriptwriters never made a secret of the supposed problem. Starting with Abed, who analyzed this scheme from a meta-level, through the many attempts made by the other characters to put the new characters on the same level as the former, to the final realization in season six that the group Has fallen too far apart in the meantime to broadcast the same dynamic as at the beginning, at some point those responsible came to the conclusion that the series should end before it dies by itself. The remarkable thing: The makers used the indulging in memories for emotionally diverse reactions: They allowed melancholy when remembering that Abed had to say goodbye to his best friend, as well as having fun when the permanent troublemaker Pierce Hawthorne passed away Group could stop. Remembering the past does not automatically mean lagging behind, but rather reflecting on the fact that we are shaped by what we experience.

8. If you know yourself, there is nothing wrong with adapting!

When we are young we think we need to adapt in order to be accepted by others. At some point we notice that personality is much more decisive than being a follower. It is actually a hybrid of both extremes with which we can go through life contentedly. After all, not all of our character traits can be lived out appropriately at all times. Even a drama queen simply has to shift down a gear at times. Just as particularly shy contemporaries have to jump over their shadows here and there in order not to lose touch with the world. However, this does not work simply by putting on a mask under which you forget to be yourself. Instead, the most important thing is to reflect on what defines us - then in some moments we can be as it is appropriate for our environment and yet we remain ourselves.

9. Question prejudices before judging them yourself! 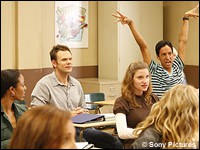 Using prejudices or clichés is never the smartest way to deal with something. But as a rule, it does not help someone if they just stop doing it from now on. Pierce Hawthorne, one of the seven main characters in “Community”, is a gay and misogynistic racist at the beginning of the series, who is repeatedly reprimanded by his friends for finally broadening his horizons. They can actually get through to him, however, only from season three when they and his (far more radical thinking) father realize where the questionable behavior of their fellow student comes from. So it doesn't necessarily help to just treat the symptoms of wrong behavior. Instead, it is much better in the long run to find out where it comes from and, at the beginning of the investigation, maybe even to try to understand the cause. One must first get to the source in order to suffocate the source of all evil right there.

10. Bonus: There are different timelines!