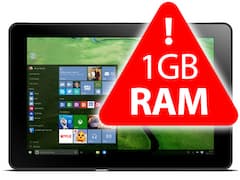 Windows 10 hardware: 1 GB RAM limits future potential
Image: teltarif / Odys Even before the Windows 10 launch, we reported on what interested parties should look out for when buying a PC with Windows 10. Now the new models with pre-installed Windows 10 are coming onto the market in stages. Some manufacturers are surfing the Windows 10 hype wave unscathed and speculate that customers do not pay so much attention to details. This means that bad purchases are inevitable.

Windows 10 hardware: 1 GB RAM limits future potential
Image: teltarif / Odys We looked at the data sheet of the Windesk 9 plus 3G V2 with a bit of disbelief. The new Odys tablet with Windows 10, which is being launched across the board these days, only has 1 GB of mini-RAM. Basically, there were already models in the Windows 8 era that were delivered with 1 GB of RAM - the fact that new Windows 10 devices have to live with the same hardware limitation is really annoying for customers. As a precaution, we had already advised a model with at least 2 GB of RAM in our PC buying guide. Finally, Windows 10 has a minimum RAM requirement of 1 GB for 32-bit and 2 GB for the 64-bit variant. Minimum requirements also mean that users with the appropriate hardware are always at the limit and even running a performance-hungry app can be enough to throw things off balance and freeze the system. Basically, customers could have been satisfied with the rest of the 8.9-inch hardware (quad-core processor from Intel with 1.83 GHz each in burst mode and 3G connection) in view of the low price of around 200 euros - but the joy of the supposed bargain is rather short-lived.

By the way, there is another factor to consider with the Windesk 9 plus 3G (V2). There is an older version, recognizable by the missing "V2" appendix, which is still equipped with pre-installed Windows 8.1 (32-bit) with Bing. An upgrade to Windows 10 is also possible here, but first the customer receives Windows 8.1 and has to perform the upgrade himself.

Criticism is aimed at all providers

Basically, however, the criticism is not aimed specifically at Odys, but also at all other manufacturers who equip their devices with similarly weak hardware and thus reduce their future security. Ultimately, there will be major adjustments and changes over the life cycle of Windows 10, which also lead to increased performance requirements.

Windows 10 is still tame, but that could soon change

Sure, Windows 10 is currently set up very resource-efficient and the hardware hunger is limited - but with future updates this could change quickly. Microsoft finally introduced the so-called Windows-as-a-Service principle in its current operating system. As a result, the IT group would like to retrofit extensive features in Windows 10, even if the OS has been around for a few years in the future. It can therefore be assumed that a wide range of upcoming functions will only be reserved for fast PCs. Buyers of a cheap tablet will probably not be served and thus left behind on further developments.

Hardware is only one aspect: Windows 10 Home or Pro

In our article on Microsoft's IFA press conference, we already discussed which choice manufacturers will make with the Windows 10 version for their upcoming models. Particularly in the case of inexpensive models, the OEMs are increasingly relying on the Home Edition, which, however, has limitations.

In such a case, tech experts would like to switch off providers with a sentence like: "Dear manufacturer, don't make your customers unhappy". After all, when users buy a new PC with Windows 10, they assume that they are buying a piece of the future. Sure, the price point of around 200 euros always has certain restrictions, but they shouldn't be that serious. Our urgent call to PC manufacturers is therefore not to publish any new Windows 10 devices below 2 GB RAM in the future.

In our IFA hands-on we took a look at the upcoming 2-in-1 tablet Lenovo Miix 700 with Windows 10, which users don't have to worry about lacking hardware power.