What is an aromatic hydrocarbon

The aromatics are a special class of OC compounds. Their main feature is their special bond structure (conjugated double bonds[1]) in ring shape. As a rule, they differ significantly in their properties from the chain-like hydrocarbon compounds (also called aliphatic hydrocarbons).

The first aromatic to be discovered was benzene (C.6H6). The name Aromat (Greek: aroma = fragrance) comes from its smell.

Soon one also found substances with similar properties, which showed a different structure. It quickly became apparent that these compounds, despite their double bonds, were not easily induced to undergo addition reactions.

The aromatic state is defined by the requirements: cyclic & planar structure, conjugated double bond system and the fulfillment of the most important criterion - the Hückel rule!

The best-known representative of aromatics is benzene. (According to Hückel's rule, benzene has 6π electrons.)

Aromatics can be substituted several times. Special rules then apply for this.

The first time scientists noticed benzene was in the process of degassing hard coal. This was done in the 19th century to extract gas for street lamps, for example. A by-product was found to be a liquid that was colorless at room temperature and smelled particularly aromatic. Liebig called it benzene.

Benzene is particularly thin and burns in the air with an orange and sooty flame. However, even at room temperature it is highly volatile, so that its vapors are particularly flammable.

It should be avoided because it penetrates the body through the skin and is inhaled through the lungs and acts as a cytotoxin in the body. It damages the bone marrow, liver and kidneys, and red blood cell production. Even small amounts cause dizziness and vomiting when inhaled. Unconsciousness follows.

It is also carcinogenic.

Benzene is apolar and therefore does not mix with water. Due to its non-polar character, it is a good solvent for non-polar substances and therefore an important raw material in the chemical industry.

Occurrence and use [edit]

Benzene is found in coal and petroleum. It is therefore released when petrol and diesel are burned. Even if the share in fuels has steadily decreased over the past few years, 75% of emissions are still released by traffic.

It is also produced when tobacco is burned. (10-100 µg per cigarette). It can also arise and be released through volcanic eruptions or incomplete fires (smoldering fires).

Food that is sold at petrol stations has repeatedly attracted attention in recent years due to its relatively high benzene load. The petrol station markets are now filled with overpressure so that only air gets outside when the door is opened and no gasoline gases inside.

Many substances that contained benzene are now banned in Germany. (Except for fuels, where it e.g. increases the knock resistance of gasoline (admixture 1 to 5%!) This practice has long been banned in the USA.

In the chemical industry it is used as a solvent and as a starting material for the synthesis of many organic compounds (especially of plastics) (e.g. aniline, styrene, nylon, synthetic rubber, plastics, detergent substances, insecticides, dyes, etc.)

History of the structure elucidation of benzene

The chemist August Kekulé (1829-1896) researched the structural formula of benzene. He had to "nibble" on this tough nut for a long time. From the measurements made by the chemist Mitscherlich in 1845, he knew that all 6 atoms of benzene are equivalent and that it is as inert as an alkane. Additions such as those of the alkenes were not possible with benzene.

With the usual alkane formulas, however, this riddle could not be solved until one night in a dream the connection appeared to him in the form of a snake that grasped its own tail. So Kekulé concluded the ring structure of benzene.

Kekulé assumed that the double bonds of benzene do not have a fixed place, but rather that they constantly change place.

Today we know that the 6 pz-Electrons of benzene lie above and below the plane of the ring. A ring-shaped π-electron system is formed, which is delocalized by the constant movement of the electrons.

Through this form of mesomerism, the benzene molecule is particularly energetically stabilized and consequently inert. That is why an important characteristic of aromatics is the absence of an addition reaction with, for example, hydrobromic acid or bromine water.

The bond lengths between the carbon atoms are proof of delocalization and the resulting special type of bond. A C-C single bond is 154pm and a C = C double bond is 134pm[2] long. In the case of benzene, all carbons have a bond length of 139 pm.

The perpendicular p orbitals (electron clouds) overlap and thus form a common area above and below the benzene ring. This is called the π orbital.

This is the actual state of the electrons in benzene. Mesomeric boundary structures cannot provide this exact representation - but at least give an idea of ​​it!

Characteristics of the ties

Hückel rule: Aromatics have 4n + 2 π electrons, which are arranged alternately.

Hückel rule: Aromatics have 4n + 2 π electrons, which are arranged alternately.
Caution: the Hückel rule only applies to simple ring systems, it does not always apply to polycyclic aromatics and heteroaromatics! 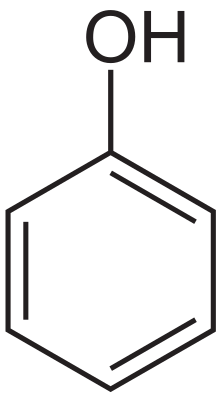