Which song describes how you feel

How do I best understand a song text?

In the seventh grade you already learned how to understand lyrics and you will certainly remember the most important steps. Here we repeat them briefly for you, so that you can quickly move on to something new:

These steps will help you understand the content of the song. But how can you go a step further and interpret the song, so form your own opinion on it?

Whenever you read a song text or hear a song, you can always ask yourself the following questions on the next few pages. 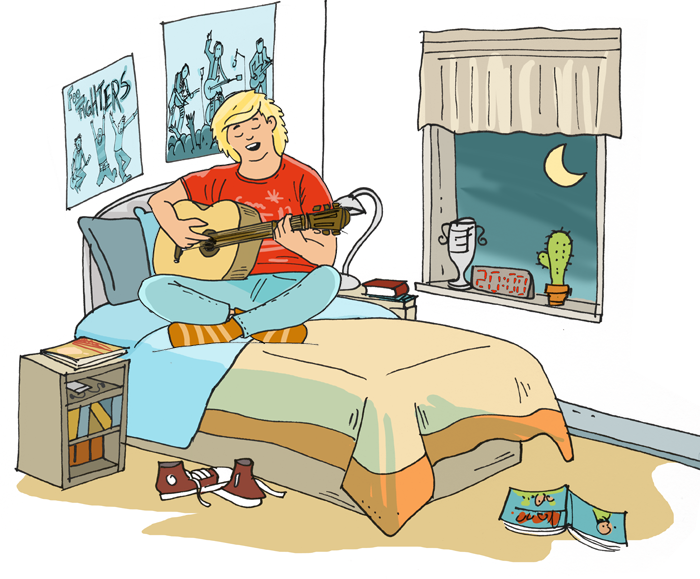 What story is being told here?

This not only applies to texts, but also to films that you watch in the cinema. It basically applies to any type of narrative. And a story is told in songs.

Who is singing here?

You wonder who is singing the song. Is it a man or a woman? Most of the time, the singer is also the "I" in the story. Not always, but 90 percent. So when a man sings: "Baby, please come back to me" do you already know that "baby" has to be a woman. Baby means something like "darling" in German. But often you also hear Darling or nicknames like sweetie, honey, sugar and much more. It can always mean a man or a woman.

What is someone singing about here?

With the help of the keywords you can see whether it is about war, the great love between two people or a political statement. For example, a song about World War II will have very different keywords than a love song.

The best stories are the ones that you feel connected to in some way. For example, if a boy is lovesick, you may be more empathetic about how he's doing than if a bank robber sings a song about how he's in jail. Because you (hopefully) have no experience with that. Unless he's angry. That could be more of a feeling that sounds familiar to you, right?

How do you feel when you read the lyrics?

Often it is the feelings that are expressed in the song that determine whether you like the song or not. For example, if you're angry, you might prefer rap, with its aggressive lyrics and fast beats. But if you're unhappily in love right now, you're more likely to want to listen to a love song.
So it always has a lot to do with how you are doing right now. Because you don't feel the same every day. And so you will probably want to hear different music on different days. Not every day demands a happy reggae song, but neither does a funeral march.

Here are a few more adjectives that often appear in a song text.

Sometimes you will notice that there are grammatically "wrong" things in the texts. But how can that be? Can't the native speakers speak their own language? Yes, but it is often used as a stylistic device. For example, instead of "he doesn’t", "he don’t" is used. What is always pointed out as a mistake in your class work is now suddenly allowed.

Or a lot of colloquial language is used: “going to” sounds a little stiff and formal in songs. It's not so good to sing either. So "gonna" is often used, or "ain't" instead of "isn't".

Here are a few more examples of incorrect words that are common in songs:

So there is a difference between written English (grammatically correct) and spoken English (also applies to sung songs), where some letters are swallowed, such as comin 'where the "g" is missing.

A song is part of spoken English, since it is usually sung. Abbreviations and "swallowed" letters can be used here. You shouldn't do this in a class test, however, because here you should show that you have a command of written English.