How is the home loan from SBI

History of the Kolping House (excerpt)

The Kolping Family has its own house on Pfarrbrückenweg. Long before the building by Praeses Schächtl, the desire for a house of his own was alive. On March 28, 1926 the chronicler wrote: "The previous efforts to obtain a club house have unfortunately remained unsuccessful. But we will continue to work - Rome was not built in a day".

The Catholic journeyman's association was well housed in the Haslbeck brewery, and the chronicler was full of praise and thanks when the hostel father died in 1928, but it was believed "that Catholic life in Catholic associations can only flourish on the floor of one's own house, can grow and prosper, develop and become stronger ".

The house had to be financed from four sources: the foundation was a government home loan. In addition, there was the service provided by the state insurance company in Landshut. The central association in Cologne also gave its little edge, but only in the form of a loan; the association had to raise the rest with the help of donations. During the search work in the archive, a document came to light that is unlikely to be available in Vilsbiburg: It bears the personal signature of the then nuncio for Germany and later Pope Pius XII, Eugen Pacelli. He also gave 50 marks.

Because of the state home loan, the client was no longer free to design the plans. The government attached great importance to the construction of apartments, whereby the President had to look at his purpose, the club halls. Both purposes had to be combined accordingly. 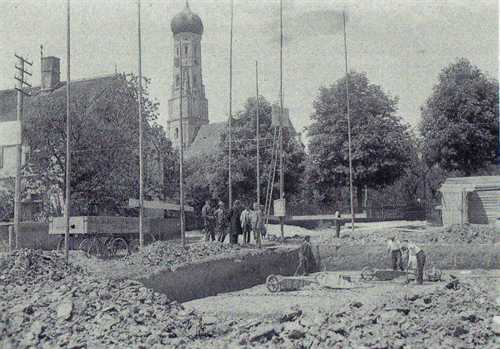 Extract from the construction diary 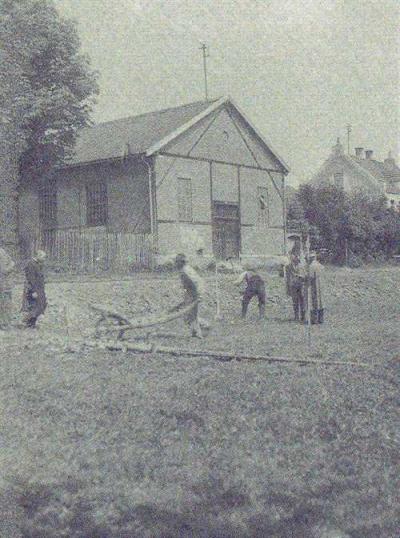 June 22, 1927
The work is progressing well, the basement ceiling and floors are being concreted.

June 27, 1927
One fatality had to be mourned in the course of the construction work. It was about the mercenary and carpenter's son Lorenz Huber von Onichreit bei Lichtenhaag.

July 9, 1927
In the evenings, Bachmeier's First beer takes place in the Haslbeckkeller. Each of the 46 workers and 4 building committee members are given:
- a large piece of roast pork with mixed salad,
- four pieces of bread
- two liters of beer
- two cigars.
Even the builder pays everyone a liter of beer. 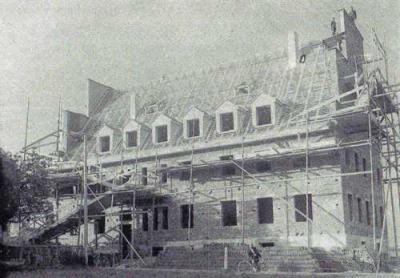 July 22, 1927
The battens for the roof will be completed, the loft apartments will be finished with brickwork.

July 25, 1927
The covering of the roof begins. In addition, walls are being built and floors are being laid. The plastering will also begin. The lightning rod is installed on the roof. 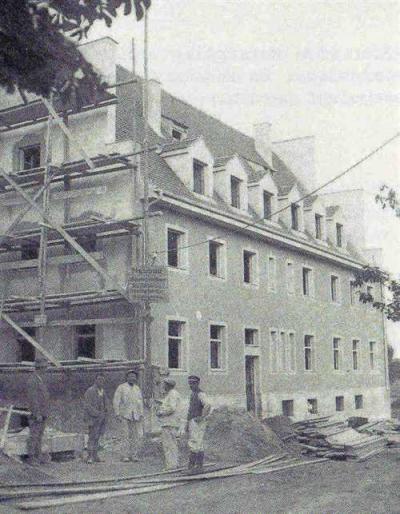 August 13, 1927
The plastering work is finished. The scaffolding is dismantled.

August 17, 1927
The electrical lines are being laid. The walls in the attic are being plastered.

August 30, 1927
The installation work for the water is started.

August 31, 1927
In the evening building committee meeting, the award of the economy is discussed, as Mr. Kuffer, former Lindenwirt, agreed to take over. The contract will be signed later.

October 1, 1927
The economy of the Catholic club house is run by Seb. Kuffer, former Lindenwirt, took over.

October 16, 1927
In the evening 8 o'clock opening ceremony of the inn. The rooms of the house were overcrowded. President Schachtl gave the speech. 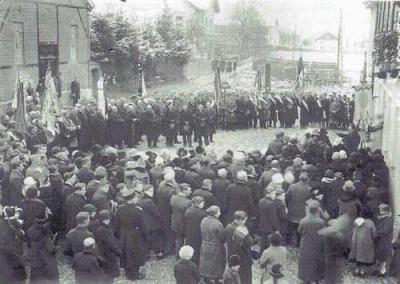 November 13, 1927
On this day the church inauguration of the catholic club house takes place by the pastor Dr. Anton Goetz. In addition to many guests of honor, the Kath. Journeyman's clubs in Landshut, Mainburg, Velden, Geisenhausen and Frontenhausen. 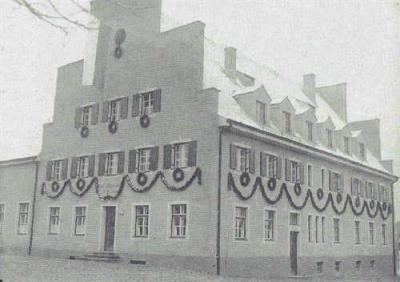 Mr. Rohrmeier had beautifully decorated the outside of the clubhouse with wreaths and garlands made of fir green.

History of the house after completion

1937 - 1949
As a result of National Socialism in 1933, club activities were initially banned (March to November) and then severely restricted. Due to the associated financial losses, the house could no longer be held. On December 4, 1937, the house was sold to the district craftsmen.
After the war ended, efforts to regain the house began. Above all, it was Prelate Dr. Anton Götz, who took the first steps. After tough, difficult and sometimes discouraging negotiations, the house was transferred back to the association on May 13, 1949 and the Kolping Family Vilsbiburg was again entered as the owner in the land register.

1949
The dilapidated bowling alley was demolished in autumn.

1954
The backdrop shed was built in the summer.

1961
Change of tenants: The Nitzl family took over the inn from the Reichl family on July 1st. The brewery change took place on October 1st.

1964
On June 1, the free land assignment for the sidewalk was decided. The city takes over the production of the sidewalk.

1965
On November 22nd, we started building the hall on our own. The old floor and wall covering have been removed.

1967
After the 75th anniversary celebration, the exterior renovation began. The bad plaster was chipped off and renewed.
The dormer windows were clad with sheet metal and the whole house was given a new coat of paint.

1970
In August the chimneys were dismantled down to the storage floor and rebuilt again.

1974 - 1979
Warm water heating was installed in the guest rooms, the tenant apartment and in the meeting room on the 1st floor. The hall received warm air heating.
Change of tenants: The Eberl family took over the restaurant from the Nitzl family.
The entrance area and the toilet facilities have been redesigned.

1982
Road construction work on the Kolping House begins on July 20, for which considerable land assignments were required.
Change of tenant: Martin Bremm will take over the restaurant business from May

1985
New lighting is installed in the hall.

1986
Two apartments are being renovated. 3 chestnut trees are planted in the courtyard of the Kolping House.

1987
Change of tenant: Frank Petschke will take over the restaurant from May.
On September 3rd, the extensive exterior repair work begins with a new coat of paint on the Kolping House. The work will be finished on November 28th.

1989
Change of tenant: Reinhold Mörs will run the restaurant from July.

History of the house from 1990

1996
Plastic windows were installed
Change of tenant brewery: Brewery Erharting -> Aktienbrauerei Vilsbiburg
Renovation of the guest room and the adjoining room.
A new tavern is installed.

1997
Renovation of corridors and toilets

1999
The kitchen has been redesigned from scratch.

2007
defective paneling on the back of the hall