How peaceful is Sokoto

Terrorism in Nigeria: It's peaceful in the shadow of the Sultan

The terror of the Islamist group Boko Haram continues to spread in Nigeria. Ironically, the seat of the head of Nigerian Muslims remains peaceful. 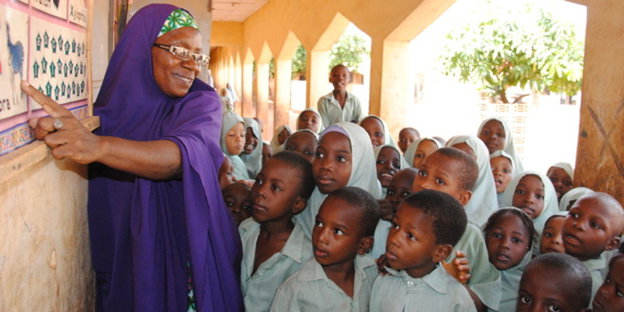 “When I got here and drove the car, people looked at me as if I were an alien”: Teacher Rahmatu Saleh. Image: Katrin Gänsler

SOKOTO taz | The sultan won't have time. Muhammad Sa’ad Abubakar III is due to arrive in the course of the afternoon, his secretary confirms. "But tomorrow morning he'll be on his way." The secretary shakes his head regretfully and taps his fingers on the table top of the huge desk behind which he is sitting. Visitors are queuing in front of the door that leads into the dark, windowless room. Everyone wants to talk to him, ask his advice. In front of the palace, an unadorned white building, a few beggars are waiting for alms.

The Sultan Sokoto is the spiritual leader of all Muslims in Nigeria. The first Sultan was Usman dan Fodio, who went to the Holy War a good 200 years ago and proclaimed the powerful Caliphate of Sokoto in 1808. Regardless of who ruled the region and then later Nigeria - the sultan retained his importance.

The palace, the sultan and the city of Sokoto, which with 360,000 inhabitants is located in the extreme north-west of Nigeria just before the border with neighboring Niger, are still inextricably linked today. Bad tongues say: Otherwise Sokoto wouldn't have much either - no industry, poor connections to the rest of Nigeria, no pulsating life.

“When I came to Sokoto more than 30 years ago and drove a car, the people here looked at me as if I were an alien,” recalls Rahmatu A. Saleh. She's sitting in an empty classroom, with hundreds of girls and boys romping around in the schoolyard. She laughs. "And today it's still sometimes the case."

This is typical of Sokoto, believes the teacher, who is also the chairman of the Association of Muslim Women in Sokoto State. She herself came in 1978. Because of the marriage, she left her homeland, the state of Gombe in northeastern Nigeria. “Gombe is very different. There are many ethnic groups and my people have had Western education. "

"Western education is a sin"

The attacks that the Islamist group Boko Haram - the name means "Western education is sin" - has carried out repeatedly in Gombe over the past few months would not prevent them from returning, if they could. Her second home, Sokoto, is still considered to be reasonably safe. For a year now, Boko Haram has been spreading through the entire northern half of Nigeria. It is no longer even possible to guess where the next attack is planned. But Sokoto has been spared so far.

“There are always rumors that Boko Haram could strike in Sokoto too,” says Dan Chijioke from the non-governmental “Center for Health, Peace and Progress” (3Ps). However, Sokoto has one decisive advantage: “Many residents still listen to the traditional rulers. Their influence is greater than that of politicians and the government. ”The Sultan enjoys a very special reputation, says Dan Chijioke. “He is the greatest figure of respect. In the media he calls for peace. "

“We must continue to live together peacefully, no matter what religion we have or what ethnic group we belong to,” the Sultan of Sokoto announced at the beginning of the fasting month of Ramadan. He has long been praised for this by many Christians in the country. Today many find his statements too weak. It is said that he must speak out more clearly against the Boko Haram terror, which has killed several hundred people this year alone.

Even Cecilia M. Eseme is not enough to bet on the Sultan. The head of 3Ps looks out of her barred window. The power went out again. “It looks peaceful, yes. But we have to be on our guard, ”she says skeptically. Explosives have long been found in Sokoto too.

However, she is even more concerned about the countless children and young people who come from neighboring Niger and are sent to beg by their Koran teachers. Such children, when they grow up, often become recruits to Boko Haram. “If we're not very careful, Sokoto can quickly develop into a city like everyone else. Influential traditional rulers or not. "