In the following article you will find explanations, tasks and videos on the topic of friction. We deal with the various conditions as well as the topic of rope friction:

Friction is a resistance in the contact surfaces of two bodies, which prevents or at least impairs mutual movement by sliding, rolling or rolling. 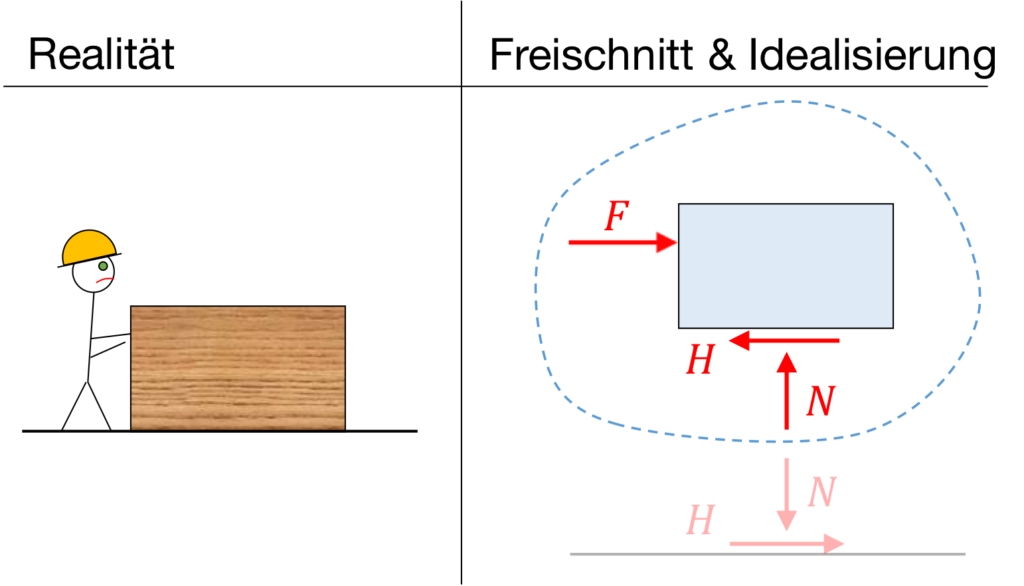 If in "reality" a construction worker tries to push a box away, the friction force $ H $ acts against it, as you can see in the free cut. In addition, there is a normal force $ N $.

Whether the box slips depends on the nature of the box, the subsurface and the applied force $ F $. 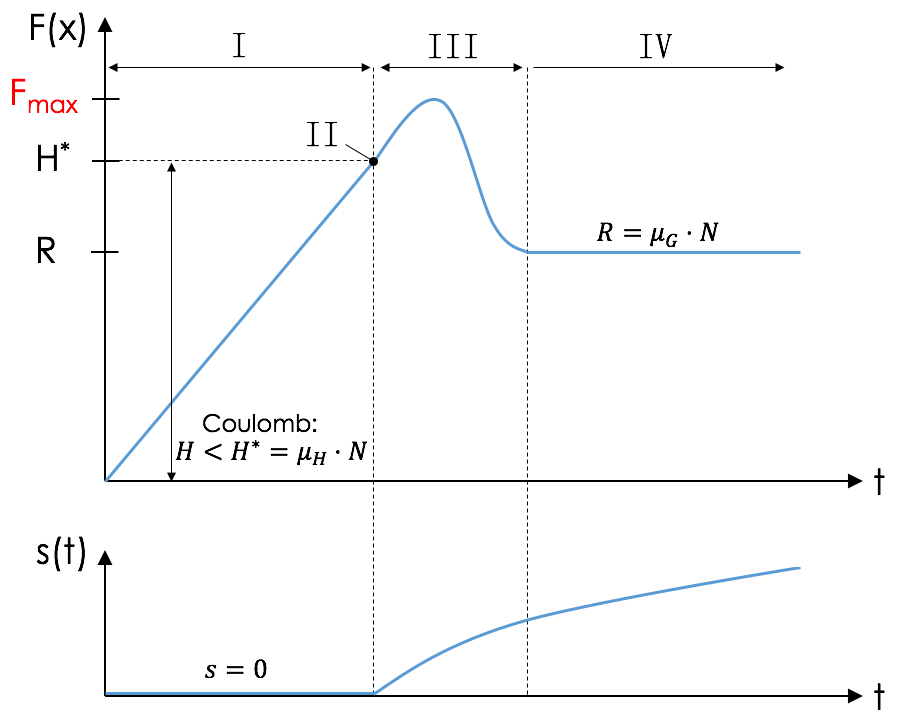 I - state of static friction

The state of static friction describes the retirement, in which all forces acting on the body are in equilibrium.

In this state the body is accelerated for a short time.

Here the body is in equilibrium in uniform motion at constant speed. Instead of the frictional force $ H $, the contact force $ R ^ * $ acts.

State I and II belong to Statics (this ebook)

For tasks on the topic of friction in statics, the task text must be read carefully! As soon as information such as “maximum”, “minimum”, “maximum” etc. is there, you are in state II and you have to work with Coulomb's law of static friction. The following applies:

with $ \ mu_H $ as the coefficient of static friction, which depends on the

A box with the mass $ m $ lies on an inclined plane, see illustration. 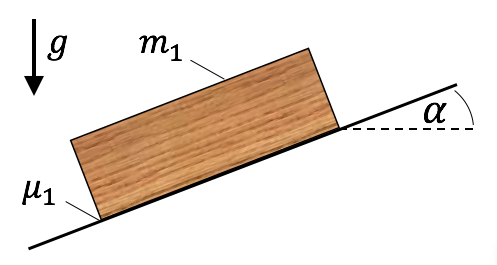 a) Determine the reaction forces in the contact area.

b) How big must $ \ alpha ^ * $ be so that no slipping occurs? How big are the reaction forces then?

Solution steps for a) 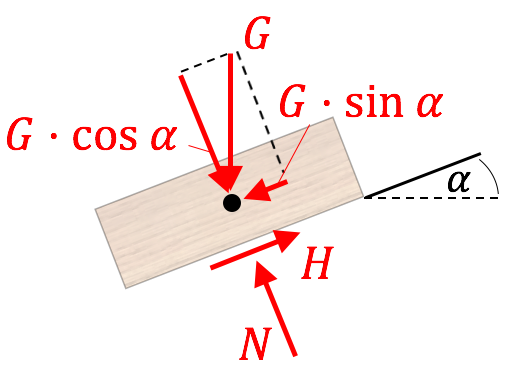 2. Calculation of the reaction forces:

The unknowns are $ N $ and $ H $. For this we simply set up two equilibrium conditions.

Since the limit state $ H ^ * $ is greater than the static friction $ H $ that occurs, the box remains at rest.

Solution steps for b) 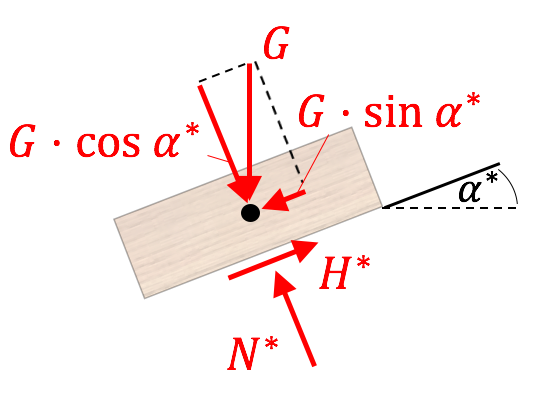 Since we are in the limit state, we can use the law of static friction. We need that as an additional third equation to determine the three unknowns. To do this, we set the equilibrium conditions

The reaction forces are:

Rope friction occurs when a rope is laid over a curved surface (e.g. a cylinder) and is subjected to two forces at both ends.

In the limit state, we can establish the relationship between the rope forces using the rope friction formula according to Euler and Eytelwein.

It must first be clarified which side is the load side. 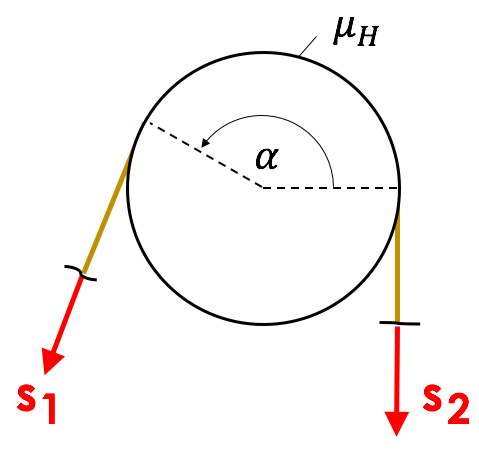 with $ \ alpha $ as the wrap angle - this must be given in radians!

Note on converting angles to radians:

Example of static and rope friction in combination

The following system is given. In addition to static friction on the box, rope friction also occurs in this task. 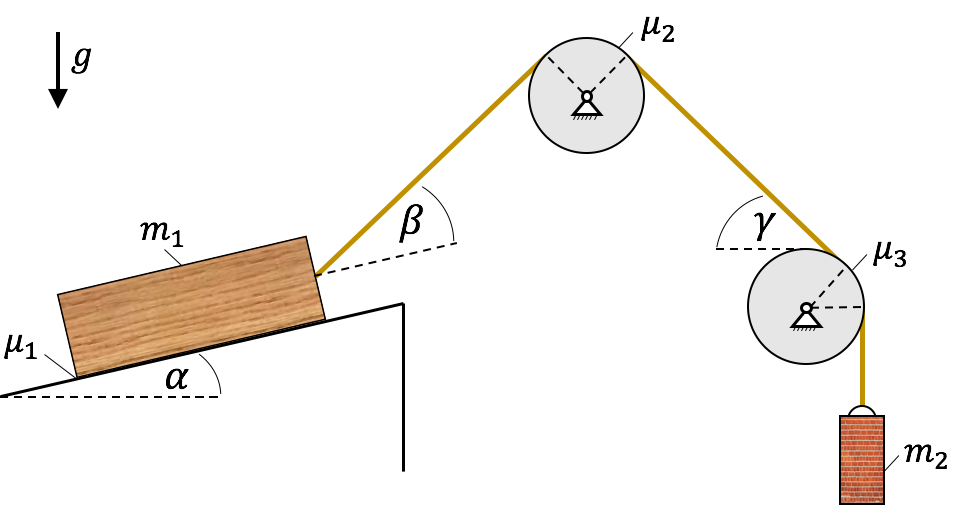