What is a giant molecule

Into the realm of giant molecules

This article comes from the magazine “Polymers - All-Rounders of Modernity” of the Society of German Chemists and was published by Spektrum CP.

100 years ago, a German chemist postulated the existence of molecules of any size and received ridicule and criticism from many colleagues for this. But his theory comes true and paves the way for the rapid rise of the plastics industry.

There are only giants in fairy tales. If you will, that was also the case in chemistry up until the 1920s. At the time, experts considered molecules made up of hundreds of thousands or even millions of atoms to be a pipe dream. According to the prevailing doctrine, the basic building blocks of all substances are atoms or small molecules. But a young chemistry professor by the name of Hermann Staudinger was not impressed and went in search of the molecular giants.

It is not a research expedition in the strict sense. Because only scientific theories and experiments can provide an answer to the question of whether chemical compounds made up of so many atoms actually exist. Similar to the discovery of some distant countries, however, Staudinger's journey into the unknown realms of organic chemistry turns out to be a true odyssey. But one after anonther.

The year is 1920. The First World War (1914–1918) was over for a short time and Europe was out of joint. Hermann Staudinger, who will turn 39 that spring, is Professor of Chemistry at the Swiss Federal Institute of Technology in Zurich. There he researches, among other things, the molecular structure of biopolymers such as natural rubber, an essential raw material from which rubber is made, and vegetable cellulose for the paper and textile industry.

Polymers had found their way into scientific linguistic usage a few decades earlier, but little was known about their structure or molecular weight. The term was introduced in 1829 by the Swedish chemist Jöns Jakob Berzelius. In experiments with tartaric acid, he observed that substances can differ in their appearance and physical properties despite their identical chemical composition. Berzelius called such low molecular weight substances polymers (Greek: polý = many, méros = particles).

However, the meaning of the term changed over time: In the early 20th century, chemists referred to such materials as polymers that were supposed to have a high molecular weight. This is indicated by the low volatility of polymeric substances. The scientists believe, however, that this would only simulate the existence of giant molecules. Instead, they try to explain the observations with so-called colloids, a loose aggregation of many small molecules.

Ahead of its time

In their opinion, X-ray structure analyzes provide evidence for this thesis. This allows the size of individual crystallites in polymers to be determined. Crystallites are crystals that do not or only partially develop the actual crystal form. They arise when polymers cool and solidify. The majority of scientists are convinced that a single molecule cannot be larger than a single crystallite. Therefore, they deduce from their measurements that chain-like compounds consist of a maximum of 500 atoms. They vehemently reject the existence of larger macromolecules.

Staudinger comes to a different conclusion through his own considerations and years of experimentation. On June 12, 1920 he published his thesis in the "Reports of the German Chemical Society":

"Polymerization processes [...] are all processes in which two or more molecules combine to form a product with the same composition but higher molecular weight." In this way, a chemical molecule can "reach almost any size," and thus grow into a giant molecule . "Always the same or similar small groups of atoms are lined up in constant repetition to form a pattern, which ultimately produces the enormous size of the macromolecule."

With his essay "On Polymerization" Hermann Staudinger becomes - in retrospect - the founder of polymer chemistry.

In the 1920s the time is not yet ripe for a new picture of the microcosm of molecules. In Germany the monarchy is a thing of the past and a new social order is emerging. In the midst of this upheaval, Staudinger also dares to shake the world in the tiniest detail. His opponents ridicule him for it. A listener's patience travels during a lecture. He gets up and yells into the hall: "There is no such thing!" With this, the colleague expresses what practically the entire professional world thinks of Staudinger's ideas.

Staudinger's thesis is primarily based on experiments with natural rubber, which serves as the basis for the industrial production of rubber. The vulcanization process used goes back to Charles Goodyear, who discovered in 1839 that sticky natural rubber can be converted into an elastic plastic by adding sulfur.

According to the prevailing doctrine of the time, rubber consists of ring-shaped colloids, each formed by two isoprene molecules, an unsaturated hydrocarbon compound (C.5H8). Staudinger, on the other hand, believes that thousands of isoprene molecules in rubber are chemically linked to one another like pearls on a string. His thesis is based on experiments in which he tries to remove the supposed isoprene molecules with hydrogen (H.2) to saturated isopentane (C.5H12) to implement. Traditionally, this would make the rubber compound more fluid, since saturated hydrocarbons cannot assemble in a ring. In fact, however, the high viscosity is retained - which Staudinger explains by the fact that rubber consists of long-chain macromolecules.

However, the results do not convince his opponents and notorious doubters. Not even then, when Staudinger and the physicist Gustav Mie demonstrated with the help of X-rays in 1927 that only short sections, but not the entire molecule, form a crystallite in polyoxymethylene. For example, the Nobel laureate in chemistry, Heinrich Wieland, wrote to Staudinger in 1928: »Dear colleague, leave the presentation with the large molecules [...]. If you clean your products, such as the rubber, they will crystallize and turn out to be low-molecular substances. "

Staudinger is not deterred by this, however. Not for the first time is he quite alone with his opinion: During the First World War, he was the only German chemist to speak out publicly against the development and use of chemical weapons of mass destruction. In 1917 he also called on the German high command in Berlin to end the senseless bloodshed. While the military only counts soldiers and weapons, according to Staudinger, the war can no longer be won in view of the high economic power of the USA.

Possible reasons for Staudinger's self-confident and steadfast personality can be found in his early adult years, when he first embarked on an academic career, but then quickly made a career: In 1899, Staudinger passed the Abitur in his native city of Worms. His father Franz - it is said - recommends that he learn a down-to-earth profession first. So Hermann completed an apprenticeship as a carpenter. The carpenter work does not fulfill him, instead he is passionate about botany. After completing his craft training, his father gave him the blessing for studying and enrolled in botany at the University of Halle / Saale.

Shortly afterwards, the father intervened again in choosing a career: Hermann should first devote himself to chemistry in order to better understand botany. And so he begins in Darmstadt - after the Staudinger family has moved there - to study chemistry at the Technical University. After two semesters he passed the association examination, the prerequisite for a doctorate, and in 1903 the University of Halle / Saale awarded him his doctorate. In 1907, at the age of just 27, he became professor of organic chemistry at the Technical University of Karlsruhe. In 1912 he switched to the Swiss Federal Institute of Technology in Zurich. After 14 years of research in Switzerland, he finally accepted an appointment as professor of chemistry at the University of Friborg in 1926.

At the end of the 1920s, the front against the thesis of macromolecules gradually began to crumble. Laboratory tests have meanwhile confirmed that the links of the postulated chain molecules actually form atomic bonds. Staudinger himself writes accordingly and correctly: The experimental proof is provided when a substance turns into derivatives (derived compounds) without changing its degree of polymerization. Translated, this means: The atomic bonds of the macromolecules are not split during a chemical reaction. This proof is being achieved for an increasing number of natural and synthetic polymers, such as cellulose, starch or polyvinyl acetate.

The evidence is so overwhelming that in the early 1930s more and more chemists - mostly meekly - switched to the macromolecular camp. A great satisfaction for Staudinger. He becomes a celebrated star in the chemical scene and is now recognized worldwide. However, he cannot rest on his success. Because soon he is confronted with a more powerful opponent than with mocking colleagues: the National Socialists.

Above all, the rector of the University of Freiburg, the philosopher Martin Heidegger, as a member of the NSDAP sees it as his duty to check all colleagues for their "German sentiments". At Staudinger he doubts this, among other things because of his pacifist statements during the First World War. Staudinger's family also suggests undesirable political attitudes: his father is part of the cooperative movement, his mother is a women's rights activist and his brother is a social democrat and US emigrant persecuted by the Nazis. Heidegger therefore initiates impeachment proceedings. By showing unconditional loyalty to the system and above all because he enjoys a very good reputation in the international scientific community, Staudinger survives this challenge as well. He remains a full professor of chemistry and head of the university's chemical laboratory. In 1940 he founded the Institute for Macromolecular Chemistry in Freiburg, the first polymer research center in Europe.

At the same time, a completely new branch of industry developed based on Staudinger's discoveries. Factories are already producing everyday objects such as ashtrays and telephones made of Bakelite®, the first synthetic plastic discovered by the Belgian-American chemist Leo Baekeland in 1907. But a lack of understanding of the molecular construction principle of plastics makes further progress difficult.

Staudinger's theoretical foundation for polymer chemistry changes the situation. Researchers suddenly succeed in producing completely new types of polymers with a wide variety of properties. In the 1930s to 1950s, chemists invented the materials of the future: polystyrene, polyethylene, polypropylene, polyester, polyamide and many more. They are suitable for a variety of applications and can be manufactured inexpensively. Depending on their composition and molecular architecture, the new synthetic plastics are soft or steel-hard, elastic or dimensionally stable. They can be spun into fibers and poured into almost any imaginable shape.

But although plastics are quickly finding their way into many households, Hermann Staudinger is hardly known to anyone outside of the scientific community. That only changed in 1953 when, at the age of 72, he was awarded the Nobel Prize for his pioneering work in the field of polymer chemistry. He ended his lecture at the award ceremony with the following sentence:

"In the light of this new knowledge of macromolecular chemistry, the miracle of life from its chemical side shows itself in the unprecedented diversity and masterful molecular architectonics of living matter."

At that time, Staudinger apparently already suspected that the blueprint for natural macromolecules such as DNA or proteins would open up access to innovative materials with diverse properties. Indeed, researchers today are producing a number of polymers and materials based on biological models.

Hermann Staudinger is not only the father of macromolecular chemistry, but also a pioneer of bio-inspired materials research. 100 years after his pioneering essay was published and 55 years after his death (1965), the journey of discovery in the realm of giant molecules is still in full swing. 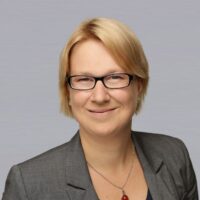 Maren Mielck is a science communicator by conviction. She is enthusiastic about the natural sciences and especially chemistry. In the name of the Society of German Chemists (GDCh), she wants to bring her fascination for chemistry closer to others, not from a subject, but with a classic communication and journalism training.