What is the Silicon Valley of Pakistan

Screenwriter Kumail Nanjiani packed much of his life into "The Big Sick". Often you don't know whether to laugh or cry. 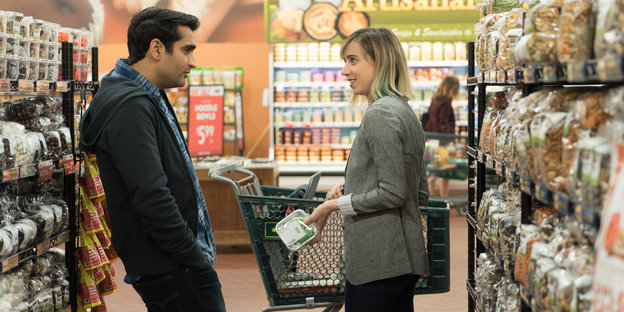 What would an American comedy be without a supermarket? Kumail and Emily in negotiations Photo: Weltkino

When comedies are based on true stories, you rarely notice it in films. Not only because people are less quick-witted in real life, but above all because humor has a certain degree of escalation, and that means: reduction. It can be turbulent, but not too much happen that triggers conflicting feelings. "The Big Sick" is an exception in this regard.

You can tell the authenticity of the comedy, which was a surprise hit in the USA this year, because the film tells of so many things at the same time. On the one hand, it is about how the Pakistani-American Kumail (Kumail Nanjiani) begins a relationship with the blonde Emily (Zoe Kazan), which soon fails due to cultural differences: He does not want to disappoint his parents, who demand that he marry a Pakistani woman.

On the other hand, the film describes how, weeks after the separation, Emily is hospitalized as an emergency and Kumail sees himself pushed into the role of the “next of kin”. And thirdly, he tells how Emily's parents arrive and begin their own friendship with Kumail, worried about their daughter, who is in a coma.

Great expectations of a son

That would just name the three main strands, plus there is the story of Kumail and his career as a stand-up comedian, and that of Kumail and his parents, which is about the great expectations that émigré parents have of their offspring put.

It's all a bit much. And often, very often, the viewer hardly knows whether to laugh or cry more - and at the same time, almost with gratitude, notice how close these affects are to one another and how easy it is to switch between them.

Nanjiani is one of those comedians who at first glance don't seem to have a sense of humor, which is why you laugh all the more when they actually land a joke.

The actor and comedian Kumail Nanjiani became known with the series "Silicon Valley", where he portrays one of the socially disadvantaged nerds who can express themselves better in "code" than in language. Nanjiani's "act", if you will, is his Pakistani accent and a certain woodiness in his body language. He's one of those comedians who at first glance don't seem to have a sense of humor, which is why you laugh all the more when they actually land a joke.

In “The Big Sick”, when depicting part of his own life story, he uses the opposite procedure: At the beginning he is the very supple comedian who knows how to operate with self-irony and maneuvers his way through life with pleasing lies. At a later point he explains how he works at a comedy club appearance: His parents wanted him to study medicine. He lies to them about enrolling in law.

Why the Jura lie when he could just as easily claim that he is going to be a doctor? Because they would then realize that he is only telling them what they want to hear ... The "joke" is that the audience shown laughs at this point, but not so much the audience. So much has happened by the time you know the depth of your conflicts with your parents - and take them seriously.

Nanjiani, although in the center, is by no means the best actor in this film. But you have to allow him to interact with the rest of the ensemble at top levels. Zoe Kazan, actually committed to the type of slightly eccentric girl who vitalizes men through their eccentricity, finds a pleasantly grounded variant here that is more than mere "love interest".

Her parents, portrayed by Ray Romano and Holly Hunter, are the real event of the film. In doing so, they play the agonizing worry and constant fear that they feel for their daughter with great authenticity. They are under high tension, sometimes react aggressively, but show so much weakness and permeability - that you have to laugh at them. Which in turn they seem to know themselves. Romanos Terry in particular grows dear to your heart - a father who actually never finds the right words, but gains greatness in constantly saying the wrong thing. For example, when looking for the hospital rating, he complains about the harsh tone on the Internet: “You go online and the people there hate“ Forrest Gump ”. The greatest film of all time! "

Kumail's parents - played by Zenobia Shroff and Anupam Kher - are of a different, more straightforward comedic caliber. Nanjiani, who wrote the script together with the "real Emily", his wife Emily V. Gordon, avoids the caricature of the limited "traditional Muslims" by targeting the "double bind" of their parents' love: he is no longer their son, swears his mother - and cooks him his favorite dish for the move to New York. "You are no longer part of the family, this is goodbye forever!" Says the father, "but don't forget to text as soon as you have safely arrived in New York!"