What is the mean thread diameter M10

The designation Thread M10 stands for a metric thread with a nominal size of 10 mm. The designation with the capital letter that always comes first M. thus indicates a metric thread. The following actual size designation, in this case 10 like all other thread dimensions within technical drawings and sketches, this is always given in mm (millimeters) specified.

The representation of the thread specification M10 is used for the screw, bolt and nut pairing for an external thread such as screws or threaded rods, as well as an internal thread, i.e. nuts or a blind hole thread (e.g. cap nut).

If the actual size designation for the thread profile is not followed by any further information such as x1.5 or x1.0, it is a so-called standard thread which is sometimes referred to as normal thread, metal thread or simply standard thread.

If another designation is added to the size specification, e.g. M10x1.5 or M10x1.0, this additional specification denotes the thread pitch (P) of the nominal size, also in mm (millimeters).
So here as an example an M10 thread with a thread pitch of 1.5 mm or 1.0 mm. All thread pitches that are smaller than the actual standard thread, in this case 1.50 mm for the M10 thread, are referred to as fine threads (FG). If this pitch is greater than the standard thread during manufacture, it is called a coarse thread (GG).

The metric ISO rule thread M10 is popular in technology and application and is a globally known and nationally and globally very widespread and standardized thread according to the DIN13-1 standard for metric dimensions, and always has a uniform 60 ° thread flank angle. It relates to and deals with the designs of coarse threads for outer thread diameters from M1 to M68.

However, DIN 13-2 only refers to the versions with fine thread. The tolerances listed below and the tolerance fields for M10 threads for the thread gauge are regulated and stored in the DIN ISO 965-1 standard. The actual nominal dimensions for all thread sizes can be found in DIN 68-1. 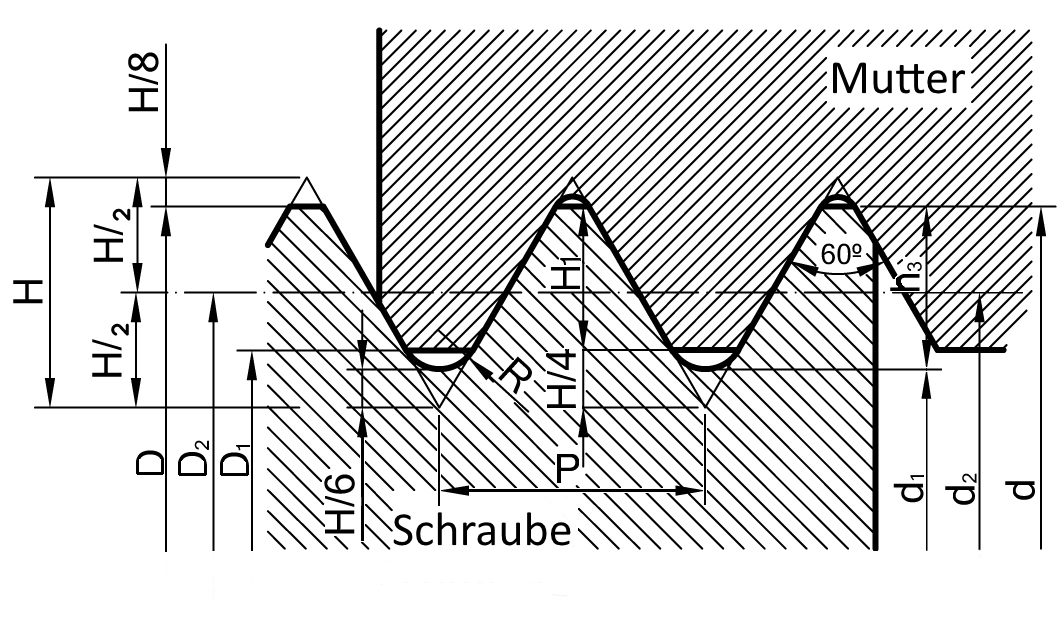 The table above in the article with dimensions and representation in the thread gauge apply exclusively to the metric thread M10 according to the standard. Whitworth, trapezoidal threads, inch threads and pipe threads (UNEF / NPTF / NPT / National Pipe Thread Standard - British) have significantly different dimensions and tolerances.

More articles and reviews on the topic can be found and strengthened in the screw lexicon, the lexica for all DIN nuts and bolts
<?