The approximately 7 million inhabitants of Paraguay are made up of mestizos, Europeans and Indians. Most of them, almost 90 percent of the population, are the mestizos (Paraguayans, the majority of whom arose from the union of Guaraní Indians with Spanish immigrants). There are only a few indigenous people left. Around 17 ethnic groups, which are still divided into smaller tribes, only make up about 1-2 percent of the total population.

At the beginning of the 20th century there were waves of immigration from Europe, as well as from the neighboring countries Argentina and Brazil. Compared to other South American countries, immigration and thus also foreign influences were kept within limits in and to Paraguay. Even today you can still experience the real Ur-Paraguay.

The people are usually very friendly and frugal. They prefer their peace and quiet, as well as their personal peace, to the pursuit of wealth or other things. They are usually neutral or positive towards foreigners. The Paraguayans' attitude to life makes a significant contribution to the fact that they are among the happiest people in the world despite poverty.

There are regionally significant minorities of Europeans and indigenous peoples, among which the Guaraní are the most important group. Your language (Guaraní), which is also spoken by 80 percent of the non-indigenous population, has, according to the 1992 constitution, in addition to Spanish official status.

Foreign languages ​​such as Standard German, Low German, Japanese, Italian, Portuguese and Russian are also spoken in certain regions and colonies. In total there are over 20 languages ​​spoken in Paraguay.

The absolute majority of Paraguayans are Catholic.

Paraguayan culture is mainly composed of the tradition of the Guaraní and Spanish tribe as well as recent Argentinean, German and Italian contributions. Since Paraguay was relatively isolated from external influences for a long time, many cultural peculiarities that were introduced by the Spanish conquerors, craftsmen and Jesuit missionaries in the 16th and 17th centuries have been preserved to this day.

Drinking mate and tereré tea is part of Paraguayan culture and tradition. A herbal mixture, the yerba, is poured into a mug and infused with hot water for mate and cold water for tereré. People drink with a straw, the bombilla. Drinking mate and tereré is an indispensable part of the social life of a real Paraguayan. It promotes communication with each other and there is something very informal and cozy about chatting to each other while drinking.

The Ateneo Paraguayo, a leading cultural center, provides funding for art exhibitions and concerts (including opera). Guaraní culture is promoted by the Guaraní Academy of Language and Culture, the Paraguayan Indian Association and the Guaraní Theater.

The most important libraries and museums are all in Asunción. These include the National Archives, the American Library of the National Museum of Fine Arts, which, in addition to books, mainly houses paintings and historical objects, and the library of the Paraguayan Society of Sciences. Well-known cultural sites are also the ethnographic museum and the military history museum. 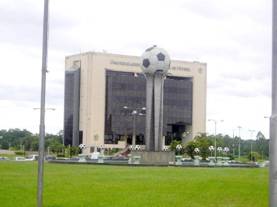 Football is very important in Paraguay.

The Educational level Paraguay's population is mediocre. Compulsory schooling in Paraguay is 9 years. Due to the poverty in the country, however, many children leave school prematurely or do not attend school at all in order to support the family economically through their own work. This is especially true in rural areas. Evening schools to catch up on graduation are therefore becoming increasingly popular.

In addition to the official languages ​​Spanish and Guaraní, English and German are taught as foreign languages. Unfortunately, schools often lack the necessary teaching staff, so this privilege is reserved for students from private schools.

There are also quite a number of them in Paraguay German private schools. They are often settled in the German-speaking colonies and in the capital Asunción. Depending on the school, the students have the opportunity to obtain a national qualification, a language diploma in the German language or a Bachillerato (university entrance qualification), which in turn serves as a qualification for individual courses.

The normal bachillerato is not recognized as a qualification for studying at a scientific university in Germany. At the Colegio Goethe in Asunción, however, there is the possibility of the mixed-language International Baccalaureat (GIB), which is also valid as an entitlement to universities in Germany. Information on the German schools in the state can be found at www.pasch-net.de.

Would you like to be in Paraguay to study or a Semester abroad graduate? The largest state university is the Universidad Nacional de Asunción (UNA). There are also around 50 private ones Universities in Paraguay. One of these private universities is the Universidad Paraguaya Alemana (UPA). In cooperation with SRH Holding Heidelberg, teaching is structured like at a German university of applied sciences and the degrees are recognized in the European Union. The Bachelor of Arts degree in business administration from the Universidad del Conosur de las Américas is also recognized in Germany.

An increasingly popular alternative to normal school attendance is homeschooling (home tuition or home tuition) or free learning (unschooling). For local residents, attendance at public or state schools is compulsory. Foreigners can have home tuition if they do not speak Spanish or Guarani sufficiently and if a native-speaking school is more than 50 km or over an hour's drive from their place of residence.

One option is the kids Teach at home in German through the Wilhelm von Humboldt Online Private School allow. As a result, children can be taught by teachers accredited in Germany according to the German curriculum and thus be prepared for the secondary school leaving certificate and the Abitur - Info HERE.

Would you like to speak the language of your new home quickly?

Save up to 40% when moving - worldwide

If the information on this page is important to you, then bookmark Please and give us one Like. If you think that others should read this information too, then recommend Please continue this page. But we'd also be honest about it criticism If you find any information that is missing, misleading or out of date, so that we can improve the content further. Please use our for this Contact page. Many Thanks!
<?